They're trying to bring him down after new Netflix special. 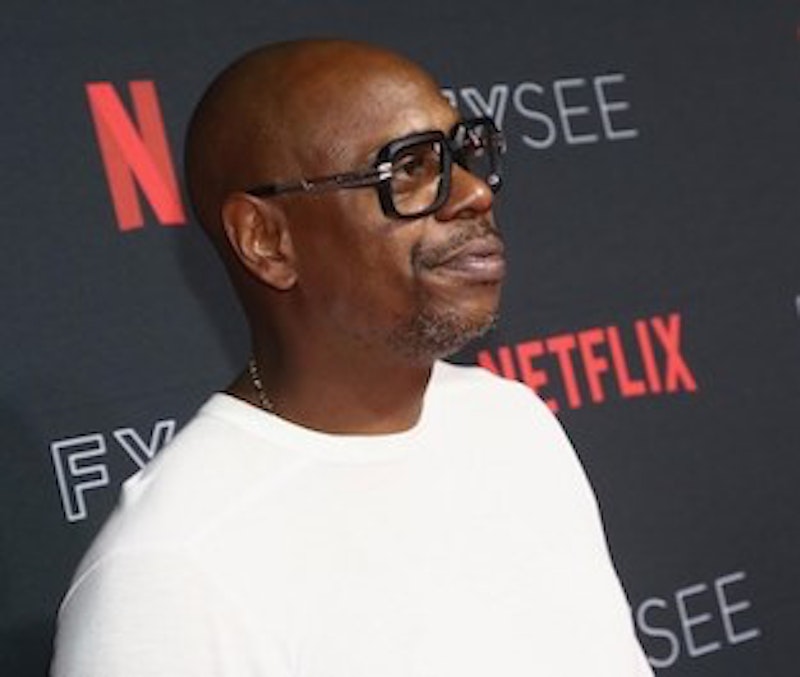 Dave Chappelle opens his latest Netflix comedy special, Sticks & Stones, with a bit involving Anthony Bourdain's suicide last year that's not particularly sensitive to the issue of severe depression. If a comedian's willingness to use a tactless set-up in order to deliver comic punch—and it was funny—offends you, then what follows might have you joining our current cancel culture demimonde that delivers mob-style justice to PC-averse miscreants like him.

At the Rotten Tomatoes, there’s a cancellation effort underway. Sticks & Stones, from the third highest-paid comic in the world last year, has a putrid 17 percent Tomatometer rating from a paltry six reviews, none of them from major media outlets. An NBC News review called the special "hilarious," but it didn't make Rotten Tomatoes' cut. JaremyJohns.com's review did. The withering critiques from Slate and The Ringer were expected, but Rotten Tomatoes bringing National Review into the fold to slag the special was a curveball.

At the other major review aggregator, Metacritic, a search for Chappelle's Sticks & Stones comes up empty, which smells like a cancellation to me. Compare that with the website's coverage of the comedian's 2017 Netflix special, Deep In the Heart of Texas, which includes reviews from The New York Times, Variety, and The Atlantic. That's the price you pay when you joke about Michael Jackson's child victims being liars, defending Louis C.K. and Kevin Hart (who made a few gay jokes years ago), or if you say that because abortion is always a woman's choice, to keep it fair men should have the choice of not paying if a child is born. "If you can kill this motherfucker, I can abandon him." It's hard to imagine a statement more likely to enrage a feminist.

The price Vice wants Chappelle to pay is for its readers to "skip" his new special, which is what reviewer Taylor Hosking recommended. That's a soft way of calling for his cancellation, and an acknowledgement that Hosking doesn't understand the role of the critic, which doesn’t involve condescendingly telling people to take their mighty word for something.

Comedian Aziz Ansari flirted with cancellation when an anonymous account of a first date gone awry he had with a woman went viral last year. That there was even speculation that his career might be over because of a consensual encounter during which he was annoyingly, and even inappropriately, persistent, but not coercive, is a worrisome commentary on the zealotry of cancel culture.

In her negative review of Sticks & Stones in The Ringer—which is on Rotten Tomatoes—Alison Herman praises Ansari's subsequent contrition, which he was forced into, and compares Chappelle negatively, calling him "openly combative."

But Chappelle's combativeness, combined with his stature in the comedy world, is why he's so valuable in the fight against cancel culture. At least he's standing up for his right, as a comedian, to offend. The more we're prevented from offending others in order to achieve perfect harmony in the multicultural Utopia, the more we need entertainers like Dave Chappelle. Delivering truth is a comedian's obligation.

The alternative, Aziz Ansari-style appeasement, just makes the rabid mob more confident and bloodthirsty. It's disturbing to see someone prostrating himself, because he got a little freaky one night, in order to be allowed to work again when not one of member of the mob had the slightest interest in listening to his side of the story or verifying the accuser's account. It's the same dynamic that leads to a mob in Pakistan murdering someone who, according to one person, allegedly insulted the Quran.

I defend Chappelle knowing that it's hard to get behind him when he posits that Michael Jackson sexually assaulting a child is kind of a lucky break for the kid, because, after all, it was the King of Pop doing it, not the pedo schlubs we're used to seeing photos of. That’s some perverse celebrity worship, even if delivered as a joke. I can't laugh at such morally sketchy material, like his audience did, but they also laughed when he said, without preface, "Good people of Atlanta, we must never forget—Anthony Bourdain killed himself." I'd give up dessert for a month to understand the psychology of those laughers who, presumably, don't hate Bourdain.

Chapelle needs to be careful that he's not just reacting, self-consciously, to cancel culture. His brand of iconoclastic comedy is an act requiring delicate balance. In order to remain an effective weapon against the cancel crusaders, Chappelle needs to keep being hilarious.

Sticks & Stones is a bit reactionary in tone, as if Chappelle's myriad detractors are getting to him, which detracts from his comedy to a certain extent. He needs to keep delivering the good kind of discomfort he's a master of without making it sound gratuitous or intended just to get a rise out of a particular group. One of the best ways to take on the cancel culture crusaders is to pretend they don't even exist.