Everything that's wrong with TV news. 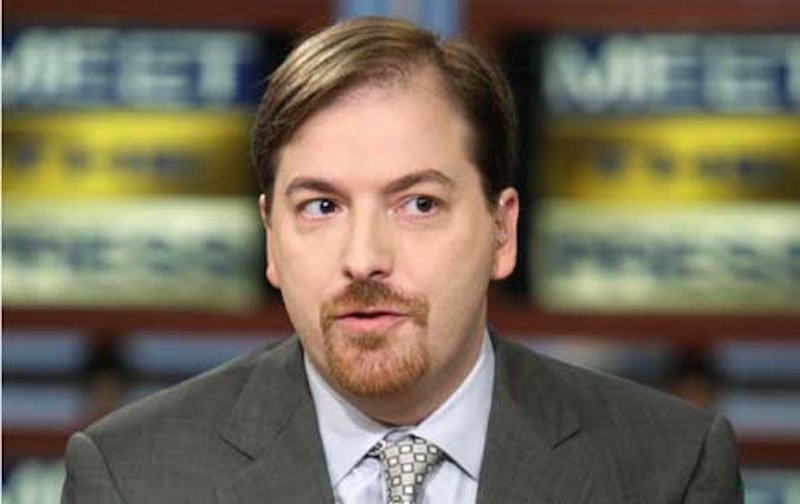 Remember that chubby kid in middle school with the dandruff, Birkenstocks and the close-cropped haircut that made him look like an overgrown 10-year-old? That’s Chuck Todd, NBC News’ resident Twitter-brained twat and smugly naïve nerdo. The dude’s on hand at all hours essentially to serve the role of a human Twitter feed: nothing revelatory or meaningful has ever come out of that doughy tomato mouth, but who cares—he’s saying it fast and up to the minute. Chuck Todd not only looks like a massive tool but totally is one: he’s the smarmy suck-up who wouldn’t stop talking about how excited he is about Yale and shit. He’s a leech, a yes-man, a shamelessly biased analyst with his fat ass planted squarely in Barry Obama’s camp. Every time Rush or Hannity bray about the liberal machine, a little baby cherubim Todd gets its wings—and a new goatee.

Seriously: reporters like Chuck Todd only legitimize the right’s paranoid rantings of a super liberal homosexual Jewish conspiracy. Todd’s absurd façade of journalistic integrity and impartiality is almost as infuriating as five minutes of Fox & Friends (achievement unlocked!). The dude’s just an amateur at hiding his raging Boehner for our President, but how else could he have gotten that front row Press Corps seat? Wipe the foam from your lips though, Chuck, you look like a buffoon. I mean, you’re competing against idiots like Ron Christie.

I understand you’re a reporter and ostensibly a “journalist,” but that authorial, objective voice becomes a joke when used by such an unctuous sycophant. I have more respect for his “out” colleagues like Matthews, Maddow, and Ratigan, even when they have blowhard moments—at least they’re communicating something real. Todd is not a journalist; he’s unqualified and his analysis is always so headsmackingly obvious, it just makes me want to slap his face through the TV screen. Check out the occasionally on-point Laura Ingraham catch Todd red handed.

Uh…yeah well uh…I mean, look…reporting…pollsters, numbers, 50%, bluh…. Wow, you suck. Stop making the cavemen on the right happier and their jobs easier, sputz. Or here, brilliantly and cunningly predicting a GOP landslide in the 2010 Congressional elections… whoa. How’d he see that one coming? One YouTube irascible grump skewered Todd succinctly here, and his main point is what bothers me the most about softball reporters in high-profile positions: people like Chuck Todd are just doing as big a disservice to us as the liars on the right, by allowing opportunities for progress and clarity to be filled with shoddy, self-serving bullshit. If you want Obama to get anything done, ask him some real questions and hold him accountable. And hide the tent in your pants, dude. Christ.