The Face of Republican Stupidity

The GOP fails yet another test, that of racial seriousness. 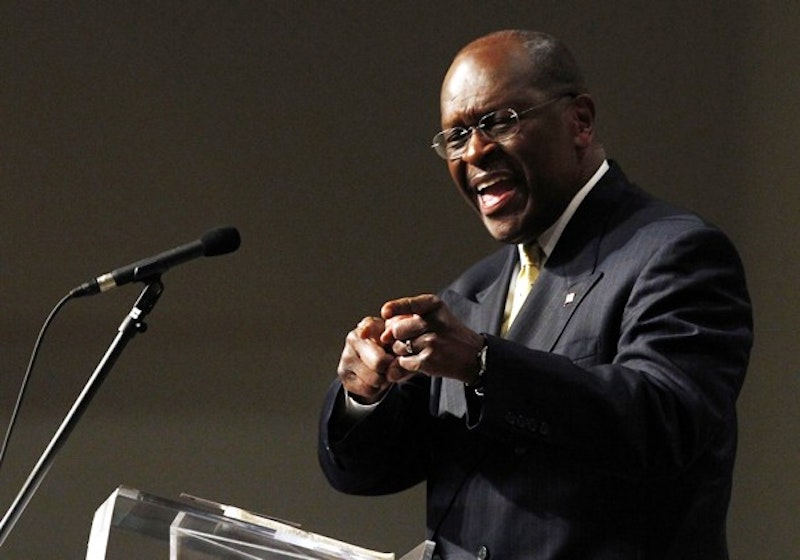 Polls find that about a quarter of Republicans say that Cain is their candidate. This puts him at the top of the field, right next to Mitt Romney. But no one who’s familiar with Cain could really want him in charge of a country. Cain is the fellow who said China is trying to get nuclear weapons that it already has, that maybe he would free everyone at Guantanamo but really he wouldn’t, and that a woman should be able to have an abortion but shouldn’t be allowed to.

His only originality comes from ignorance and garble. Otherwise he’s a Republican cliché generator: “Let’s cut to the chase… drain on entrepreneurs… skin in the game… economy is on life-support… empowerment society.” He especially likes “apples and oranges,” since he wants to impose a federal sales tax on top of the many sales taxes already imposed by states and cities. He figures if he says “apples and oranges” enough times, no one will notice that he’s talking about apples and apples.

To hear Cain speak a sentence is to realize he’s an idiot. Of course, there are people who haven’t heard him speak. These make up his non-Republican support, the people who know nothing about him except that he isn’t the incumbent and therefore can’t be blamed for the economy. But what about the Republicans?

Maybe a quarter of them have filtered out all knowledge of their party’s presidential candidates. Maybe they’re thrilled by the knowledge that Cain transformed the country’s fifth-largest pizza chain into its 11th largest. Maybe they’re grateful for the firm stewardship of the economy that he showed during his year as chairman of the Federal Reserve Bank of Kansas. Or maybe Cain is black.

The ex-CEO of Godfather’s Pizza is the Howard Dean of 2012. He’s a warm-up act who helps the base work out its emotional issues. Dean relieved Democrats who wanted to hear that someone was actually against the Iraq screw-up and could say so clearly and directly, even someone whose only qualification for president was running dinky little Vermont. Cain relieves Republicans whose shoulders groan under the chip left there by their party’s nasty racial track record.

Every idea adopted by American conservatives immediately finds its worst form. That includes the idea of racial equality. Cain joins Michael Steele, former chairman of the Republican National Committee, as a blithering mediocrity elevated beyond his talents because he’s the right color presented in the right style—meaning not just that he’s black, but a black man who is tall, bald, and peppy. They’re like the high school principals you find in teen comedy shows, though without the air of authority. There’s no “Listen up, gentlemen!” from these characters. Instead they smile and smile. Nothing can wipe that grin off Cain’s face except a question about sexual harassment.

The news that female ex-employees say Cain harassed them has generated days of headlines. Did Cain do it? Will voters stand by him? There’s one thing that we know: Rush Limbaugh has discovered racism and it takes just one form, that of accurately reporting the complaints of female ex-subordinates. “An unconscionable, racially stereotypical attack” is Limbaugh’s term for the article at Politico that started Cain’s troubles. Nobody plays the race card like the Republicans. Clarence Thomas, another under-qualified office holder, talked about his nonexistent “high-tech lynching” when Anita Hill stepped forward with her harassment allegations. Twenty years later Cain is talking about the supposed lynching too. Who falls for this stuff?

In 2012, when they have to stop patting themselves on the back and switch to voting, Republicans will give up on the black man and let him count his money. For now they’re demonstrating that racial seriousness is like the budget or national security: one more issue where all they care about is fantasy.