Political parties and party discipline have gone the way of the pterodactyl. 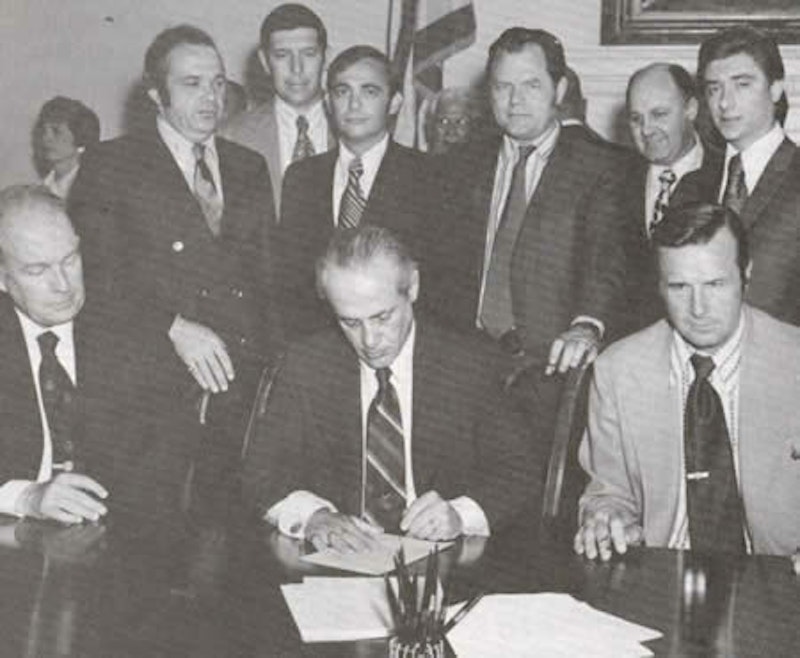 Call it what you will, a hankering for the bad old days, or just plain nostalgia, but what America needs today are a few good political bosses. They knew how to get things done and impose discipline within the parties’ ranks. If those scalawags were around taking care of business today, the country wouldn’t be in the sorry mess that it’s in. For the truth is, what politics lacks today is a central intelligence. When the old-line bosses died, they left an estate of functions that nobody has stepped forward to claim—because nobody wants the job or can do it.

This is not a lament for the passing of bossism. Nor is it an exercise in political taxidermy. But a look in the rear-view mirror shows that the concept of politics as an extended family sure beats what’s out there now, and that includes the major crop of elected officials at the federal, state and local levels. The conventional wisdom is that political bosses are deader than pterodactyls. And if that is the case, as it seems to be, so, too, are political parties and party discipline. They’ve been replaced by the social media, e-mail, radio talk show hosts, cable news windbags, think tanks, the religious right, the academic left and the parliament of the permanently disgruntled. And, yes, that includes the Tea Partiers and the 99 percenters, the double-digit class that the Occupy Wall Street movement is becoming.

But the major culprit in the breakdown of political structure and civil discourse is the very institution that is supposed to assure and enforce social order—the courts, especially the U.S. Supreme Court that has bestowed personhood on corporations and has allowed ideology and money to dictate policy. The Koch brothers, with their billions and their Super PACs such as Americans for Prosperity, have replaced the old breed of political bosses who kept order in the precincts and clubhouses and whose reach controlled the outcomes of national political conventions and even determined presidential nominees. In the late 1950s and early 60s, for example, the three most powerful political bosses in America were big-city mayors, the elected officials closest to the people—Richard Daley of Chicago, William Green of Philadelphia and David Lawrence of Pittsburgh. At the 1960 Democratic National Convention in Los Angeles, the three mayors spent hours interviewing the party’s candidates for president. At the conclusion of the interview session, Daley, Green and Lawrence emerged and announced that John F. Kennedy would be the party nominee. They wanted a winner. They rammed their choice through the convention and went home to work for Kennedy’s election.

Kennedy had his own tightly-wound political machine—dubbed the “Irish Mafia”—with his brother Robert, the U.S. attorney general, as its enforcer. Even the revered FDR had his occasional flirtations with machine politics. An early reformer who campaigned against Tammany Hall, Roosevelt, ever the pragmatist, occasionally found the association politically beneficial. However, once elected governor of New York, and later as president, he helped to diminish the influence of Tammany by driving Mayor Jimmy Walker from office and later his New Deal programs left voters less reliant on political organizations and bosses for assistance and even food. Social welfare programs became the new machine. In those by-gone days, when the U.S. Postal Service was owned by the federal government, the postmaster general carried out the chores of enforcement and patronage—James Farley was FDR’s point man and Lawrence O’Brien filled the role for Kennedy and Lyndon Johnson before becoming chairman of the Democratic National Committee. And today, by contrast, President Obama was able to force Greece to accept an austerity program to stabilize its economy but on the same day he was unable to get an infrastructure jobs creation bill through Congress.

On the other side of the political party structure, the Republican party was dominated by the Eastern establishment and under the nominal control of the party’s major domo, Leonard Hall, a member of Congress from New York who resigned to become chairman of the Republican National Committee. It was Hall who helped to recruit Dwight D. Eisenhower as the GOP candidate for president in 1952 and to work for his two elections. And in 1964 and 1965, Congress’ Republican leaders, Everett Dirksen in the Senate and Charles Halleck in the House, worked closely with LBJ to enact the great civil rights advances of the era. But so too has the GOP political establishment collapsed to the point where eight candidates for president are spit-balling each other and the closest one to a bona fide establishment candidate, Mitt Romney, can’t climb above the low 20s in the polls, helping to keep the other seven candidacies alive.

Maryland, especially Baltimore, has always been considered an academic model for urban political machines and bossism, often directed through Baltimore’s City Hall and the State House in Annapolis. And the two most recent practitioners of the craft were political entrepreneurs James H. Jack Pollack and Irv Kovens in those rollicking days of the 1950s and 1960s, with Kovens’ powers of persuasion lasting well into the late 1980s. The Republican political godfather was William “Sweetie” Addelson, consigliore to Mayor and Gov. Theodore R. McKeldin Jr. A mere 25 years ago, Kovens’ strong arm was able to reach out across the state and unify competing interests behind a single candidate for governor, William Donald Schaefer. And before him, Pollack was able to assemble statewide coalitions through handshakes with the Sasser Machine oligarchs in Prince George’s County as well as with Col. E. Brooke Lee, the iron-willed boss of Montgomery County. And before them were bosses Arthur Pue Gorman, Issac Freeman Rasin, Sonny Mahon, Frank Kelly and William “Papa” Curran, perhaps the savviest and smoothest of them all. Maryland, as a one-party state, lives on under Gov. Martin O’Malley (D) who would loathe being characterized as a boss but nonetheless asserts strong Democratic control over the state and its politics.

In 1976, Marvin Mandel, then governor, harbored a personal dislike for one of his contemporaries, Jimmy Carter. Mandel assembled 53 political bosses and elected officials, including Kovens and Pollack, from around the state for a breakfast at the Baltimore Hilton to ask them to support Jerry Brown for president. Brown won the 1976 Maryland primary. And it’s a rare occasion when the same political clubhouse in the northwest corner of Baltimore could produce a governor as well as a mayor. During the high-flying years of Mandel, Kovens had a governor in the State House and a mayor in City Hall, which in turn made him a major player in the General Assembly and the City Council as well as the deal-maker in the Democratic State Central Committee. And to some extent, Mandel and Kovens even asserted control of the Republican Party through allies in the State House and the appointment of friendly Republicans to key patronage positions and judgeships. In 1970, for example, a group of Republicans met privately with Mandel to ask which Republican he preferred as a general election opponent—then-Prince George’ County Executive Lawrence Hogan or Republican Party doyenne Louise Gore. Mandel chose Gore. Kovens’ sidekick in politics was William “Little Willie” Adams, who acted as Kovens’ enforcer in the city’s black community in exchange for assurances that blacks would get their fair share of patronage appointments through Mandel and Schaefer. And you can bet that when Mandel and Schaefer had difficulties with reluctant lawmakers, they didn’t call the State House chaplain. They called Kovens.

Those were among the most productive years in modern history, both from the state level and in Baltimore. From Mandel in Annapolis came the piggy-back tax, the school construction program, millions in local aid programs, the Convention Center, the World Trade Center, the Metro and a ream of environmental programs. And those bricks-and-mortar projects, in turn, begat Harborplace, which became the launch for Baltimore’s tourism business. And it was usually Kovens who would deliver Schaefer’s wish list of needs and wants via Mandel’s private phone in his State House office.

But such unity and single-purpose politics have vanished and gotten us to the present state of deterioration and disarray. If the likes of Daley, Green and Lawrence, and even Pollack and Kovens, not to mention Dirksen and Halleck, were alive and functioning today would Congress and the White House be imploding before our very eyes? And would America be struggling for economic hegemony in a global duel with China?

In their day, political bosses were viewed as evil and corrupt mainly by those anti-organization candidates who couldn’t win organization support. But at their best, political bosses were moderators and facilitators who could work out differences, negotiate trade-offs and make things happen. But in today’s sanitized and fractured environment, anyone caught cutting a deal to bring people together is, by definition, a political boss and therefore corrupt. And maybe that’s why nobody wants the job. Moreover, to further weaken party loyalty and the centralizing role of political bosses, creeping changes in election laws dealing with campaign finance have decentralized the role of party money in elections. Incumbents and candidates no longer have to rely on presidents, governors or political bosses for handouts. Their new loyalty is to money and special interests.

When the bosses were around, election days were festive occasions with huge voter turnouts (or stay-at-homes, as the occasion demanded). Today, voting is a civic drudge and turnouts are dismally low. What Kovens, Pollack and Addelson, as well as their fellow-travelers across the country and in Washington, shared beyond power was affection for the game of politics—assembling tickets, raising and dispensing hundreds of thousands of dollars in walk-around money and generally behaving like manic Machiavellis. Bosses like to win, to have allies in power. The key to success in the political intelligence business is information, not so much having it as knowing what to do with it. A good politician stays in power by never allowing a second power center to develop. Politics at the top of its form is like the computer business: Everybody makes a piece of the machine but only the boss knows how to put it together. Right now, nobody’s doing the job.