Who Was Christine Todd Whitman? 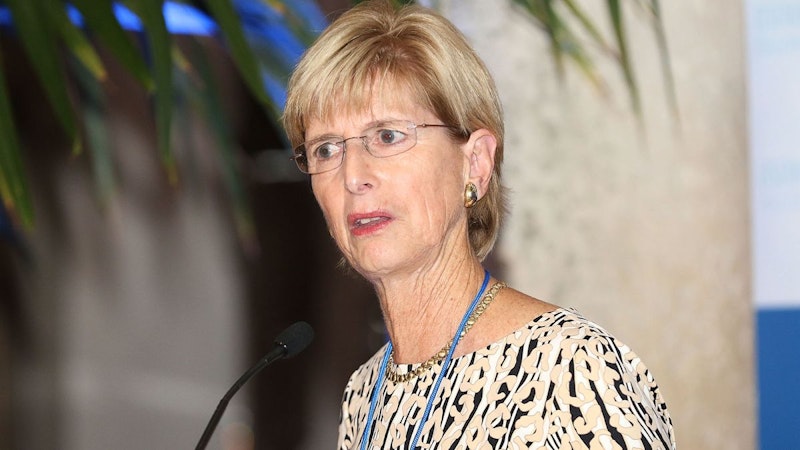 Show of hands: how many people, especially those under 40, know who Christie Whitman is? A negligible number, I’d say, which isn’t particularly surprising for an aristocratic Rockefeller Republican who served two terms as New Jersey’s governor in the 1990s, and then two years as George W. Bush’s EPA chief from 2001-2003. She was okay by me back then, cutting taxes in Jersey, but I’d have forgotten about her too, save for the fact that a close friend from college worked for her.

As political and cultural news whipsaws every single day, leaving those who follow such events in quicksand—I no longer trust any media outlet for entirely accurate information, not even The Wall Street Journal, let alone The New York Times, Washington Post and the scads of exclusively partisan websites like The Federalist, Mother Jones, Breitbart or Talking Points Memo—it’s an interesting exercise to look at opinion pieces from a month ago, since readers now know facts that the authors didn’t.

Christie Whitman and Miles Taylor—he was the author (I still think David Brooks was the ghostwriter) of an anonymous Times article in 2018 trashing the Trump Administration, for which he worked at the Department of Homeland Security, resigning in 2019—co-wrote an essay for the Times a month ago, headlined: “We Are Republicans With a Plea: Elect Democrats in 2022.” Today, it stands as a dead document, considering this month’s off-year elections and Joe Biden’s Trump-like disapproval numbers.

The article, with its dated #NeverTrump theme (I believe Trump, despite the blather from MAGA true believers, naturally encouraged by the 45th president, will continue to slowly fade away; it was telling that Virginia’s new governor, Glenn Youngkin, said thanks, but no thanks to Trump’s offer to campaign for him against the out-of-touch Terry McAuliffe) harps on the “threat to democracy” in the United States today posed by right-wing Republicans. Never mind that Whitman voted for both Hillary Clinton and Joe Biden in the 2016 and 2020 elections, and spoke at Biden’s virtual Democratic convention a year ago, or that Teller (who held a position in the George W. Bush administration; isn’t Bush now a bad guy? Oh, skip that: there’s the Liz Cheney factor) has unspecified axes to grind.

They write: “Concerned conservatives must join forces with Democrats on the most essential near-term imperative: blocking Republican leaders from regaining control of the U.S. House of Representatives… And while many of us support and respect the Senate Republican leader, Mitch McConnell, it is far from clear that he can keep Mr. Trump’s allies at bay, which is why the Senate may be safer remaining as a divided body rather than under Republican control.”

Last Sunday, The Washington Post and ABC News released an eye-popping joint poll that showed Biden with a 41 percent approval rating, and that just 31 percent of respondents said that the President was keeping his promises. Most significantly, the poll gave Republicans a 10-point advantage in next November’s midterm elections. As I’ve repeatedly noted, there are too many polls today in a diminished media landscape (again, political “reporting” is cheap for most cash-strapped organizations, which doesn’t include the Jeff Bezos-owned Post), so on the surface it’s hard to put too much stock in these free-fall numbers for Biden and the Democrats. Inflation, contrary to the Administration’s boilerplate assurances, will surely be an issue next year, but if the pandemic is mostly in the rear-view mirror and the supply chain crisis (why Transportation Secretary Pete Buttigieg (D-CIA) hasn’t been fired yet is beyond me; instead, the star of a new biopic continues to fail upwards, given the plum of dispensing $200 billion in infrastructure grants, and collecting more chits in return; and some say he’s being groomed to replace the unpopular Vice President Kamala Harris, and then replace President Sippy Cup as the 2024 Democratic nominee) eases, the Democrats’ prospects might not be so gloomy.

Too soon to tell on that one. But what must scare poll-driven Democrats silly is that Biden’s current unpopularity (and Harris’) and continuing questions about his health, is an enormous fundraising tool for Republicans, as well as a boon to the recruitment of strong challengers against Democratic incumbents and taking advantage of open seats, some created by gerrymandering. And since almost no one believes Biden’s “numbers” will improve much in the next couple of months, when the 2022 election field is firmed up, that’s a red (or white) flag for House Speaker Nancy Pelosi, who may decide, at her age, to take advantage of her wealth (estimates are elusive—naturally—with a 2021 guess of $120 million) and get out of the Beltway rat race, which won’t be fun when a GOP speaker is installed. She’s 81 now, and it wouldn’t be shocking if she pulled a Sen. Patrick Leahy and called it a day.

Last Monday, the Post ran a story related to the poll findings, perhaps in an effort to dump all the bad news at once, and it was an article that couldn’t have pleased imperialists-in-exile like Max Boot, David Frum, George Will and Bill Kristol. What was notable was a prominent Pennsylvania Representative, Connor Lamb, who’s now running for Senate, distanced himself from Biden (with a fig leaf of graciousness). He said: “To the extent I’m challenging our party, I am saying we have to break these issues down into simpler, more immediate terms: What are you going to do about the price of gifts I’m about to buy my kids for Christmas… ‘Transitory’ [about inflation] is not a word I have ever heard one of my constituents use [whether Lamb was referring to describing inflation or his district’s collective limited vocabulary wasn’t clear]… We just have to be straight with people. It’s not an easy message. There’s no silver bullet to this thing.”

Max Boot sounded the alarm for his brethren in a Post op-ed two days ago: "[N]ow is the time to hit the panic button. Biden needs to make some dramatic changes if Democrats are to have any hope of holding onto even one house of Congress and the White House. I am terrified that Democrats will lose in 2022 and 2024—and that as a result we could lose our democracy.”

I’m more terrified that Boot is still given a high-profile perch to spread his boy-cries-wolf hysteria about the United States “losing our democracy.”