One Dictator at a Time

A liberal cynic gives the green light to the invasion of Libya. 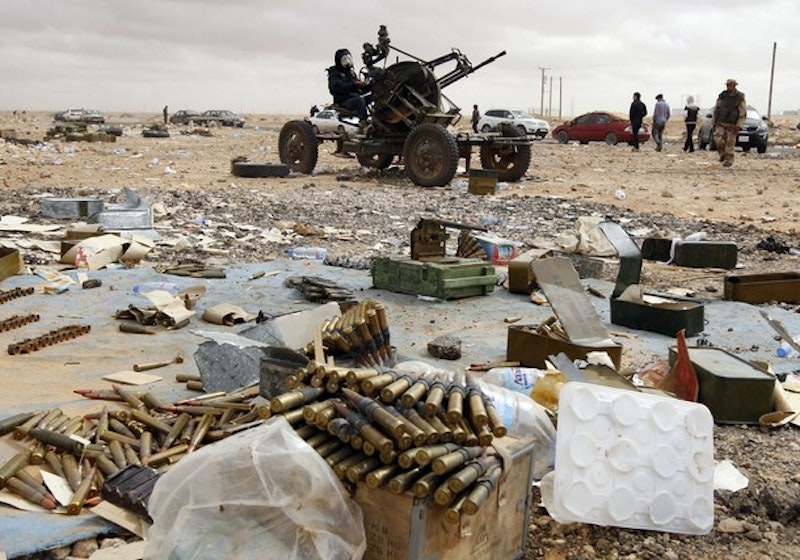 The Obama Administration doesn’t put a lot of daylight between itself and the legacies left by President George W. Bush. That’s a common line, echoed forcefully via major pundits like Glenn Greenwald and Andrew Sullivan and repeated in the hard-left community blogs.

From his failure to close Guantanamo, to continued drone strikes, rendition, and military tribunals with little to no transparency, President Obama has not gained much, if any, ground lost during his predecessor’s years. I’ve written before that our current president isn’t one to forge a new direction for our foreign policy and our military options. That could be, easily, the high-water mark of my political cynicism. I try to keep this 1917 Walter Lippmann description of the American presidency as a sort of politico-emotional rudder:

The concentration of all vitality in the Presidency has become something like a disease in which there is a feverish activity at the center, a cold inertia in all the parts. We expect of one man that he shall speak for the nation, formulate its needs, translate them into a program. […] The President is burdened with the task of a benevolent despot and then denied the authority and resources to make even a despotism effective.

That above quote, though, was more calming during the endless fight over health care reform. The power of the unitary executive—ballooned (like deficit spending) to unprecedented levels during the previous Administration—seems to have fewer Congressional and judicial checks. I remember, clear as day, protesting the beginning of the Iraq War (“books, not bombs”); with Libya, I followed the blogerati.

I initially supported the Iraq War—at least, the initial concept, during the run up—because Saddam Hussein was a lunatic, perpetrating horrific crime after horrific crime (my soccer-loving self couldn’t find words to explain its sadness over hearing that the Iraqi national soccer team had been tortured). The subsequent botching of diplomatic rationale, international support and, eventually, wartime logistics was more than enough to stop my hawkishness in its tracks.

(Another example of life creating funny little coincidences: US military action in Libya commenced eight years to the day after the start of the Iraq War.)

Since 2003, I’ve come to understand—either through dejected cynicism or liberal interventionism (sometimes its difficult to differentiate between the two)—the US’s need to deploy hardware outside of its borders so as to combat terrorism, facilitate humanitarian relief, or depose dictators that foster terrorism and commit war crimes. But foreign policy will never, should never, be that simple.

I see, over and over, the same questions from political punditry: “Why not Bahrain? Sudan? Yemen?” The answer is: yes. Pundits and wonks, who despise conflation of an ideology with the particulars of any given policy, are nonetheless happy to conflate Obama's specific Libya policy with a sweeping and generalizing view of interventionism.

Afghanistan, Pakistan, Iraq, Iran, Egypt, Libya—the actions are a part of our broader (messy, vague, maddening) goals in the broader region. Finding coherency in pan-continental counter-terrorism is difficult, if not impossible. Constructing a moral/ethical/diplomatic/political template that neatly covers all bases and leaves not one decision outside of its framework is, in my opinion, impossible.

I would simply say the United States is not omnipotent. If we were, we would be everywhere, and we would be consistent, and we would stop every slaughter on the planet, and we would be in the Congo right now. And why aren’t we in the Ivory Coast? Ivory Coast had an election, the dictator lost the election, he refused to accept the other side, he’s been shooting people in the streets. I mean, where are we going to go with this?

There's a lot to be said about the Right's bullshit response to the Obama Administration's decision on Libya, but that's another day, another column.

There aren’t any absolutes. One day, one dictator, one UN resolution at a time. As it stands, so far, I’m behind the President’s move into Libya. My feelings are not entirely different from my thoughts pre-Iraq invasion: dictators that kill their own people don’t deserve to stay in power. The caveat, though, is that by letting France and Britain and (almost) the Arab League take the lead; by hanging back, PR-wise, similar to its responses to Egypt and Tunisia; that the Obama Administration is, ever so slowly, rebuilding its image in the Middle East. We’re going to bomb the hell out of your dissidents and your terrorists and your dictators and then give you the finger; we’re going to do the former while turning the latter into a thumbs-up from behind the curtain.

Perhaps the most difficult reconciliation for the current and future administrations is the balance between reforming and downgrading our military and counter-terrorism actions in the Middle East and Central Asia, addressing very real concerns with terrorism and human rights abuses, and not pissing off everyone around us in the process.

A little cynicism can go a long way in rationalizing, down-playing, or straight-up ignoring the facts on the ground and the truths in your heart. Going after Muammar Gaddafi is good on humanitarian grounds; good on “overall Middle East/Central Asia policy” grounds; and bad on logical and political grounds. The Obama Administration has kept a cool head through a lot of heat; that’s what I’m banking on, still, now.