The deification of Hollywood stars isn’t a recent phenomenon. 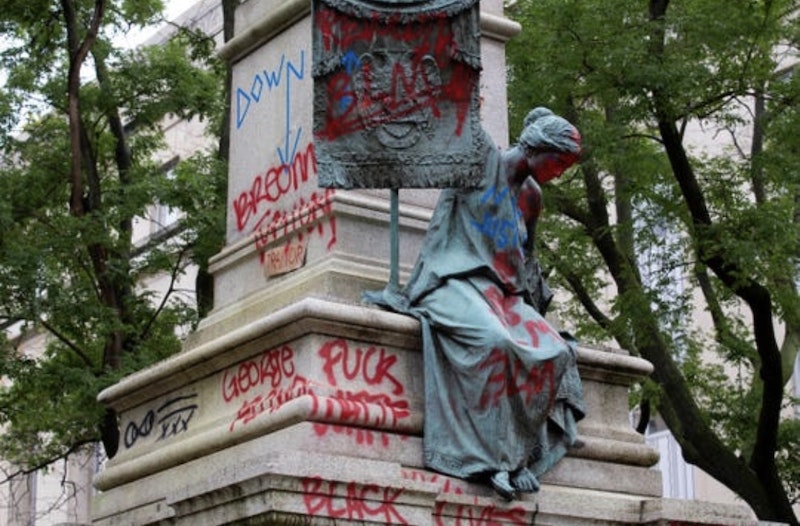 I began to reflect about celebrity culture, Gods and statues when I accidentally came across The Off Camera Show, the YouTube channel of the American interview-based television show by Sam Jones. The host was Andrew Garfield, the Hollywood star who played the role of Peter Parker in The Amazing Spider-Man. In a short clip, Garfield explains what being a celebrity means to him:“And celebrity culture: even this [conversation], kind of propagates in a way like me feeling, like you know, that there’s a self-important thing. So I would love more consciousness around the role of the storyteller in society because it’s, it’s been mashed with the role of God.”

The deification of Hollywood stars isn’t a recent phenomenon. In the first half of the 20th century, the industry behind Hollywood created the so-called Star System. It was when actors and actresses were taught how to walk, charm, behave in private as in public, and how to keep well-hidden their real-life secrets. Theidea was to make the audience think that public and private lives of stars were indistinguishable realities, that the fictional was the real. Even though the Star System is long gone, Garfield highlights that celebrity culture propagates on its own in the Internet era. Even his informal and spontaneous conversation with Sam Jones will eventually be perceived, by the audience, as Garfield's personal move, as a shining aspect of his “star” public figure.

Deification intermingles with isolation. In another interview by Jones, the actor Ethan Hawke talks about stars being “behind a glass wall”: “The thing I realized, the second you become famous, you’re kind of in a weird isolation. People wanna know why famous people marry other famous people so often, or something like that? It’s because they are in ISO with them. I just did this beautiful talk, it was kind of heartbreaking to me in a strange way, I did this talk at the university… I was trying to talk with them [the students], and trying to be, to the best of my ability, I was trying to be real with these young kids, they are 20 or 25 or whatever. But nobody wants me to be real: they just want a photo.”

Deification is accompanied by creation of cult images, which are venerated for the deity they enclose. Given that they’re sacred, cult images are also kind of distant, unreachable and untouchable. Taking a picture with Ethan Hawke instead of having a conversation with him is the first step towards idolatry. These students will get back home with their fetishes, they’ll attach them to the wall of their room and they’ll periodically come back to adore them.

“For I, the LORD, do not change; therefore you, O sons of Jacob, are not consumed.” Malachi 3:6

“Therefore you are to be perfect, as your heavenly Father is perfect.” Matthew 5:48

God is always right, never contradicts herself and is essentially immutable in her impeccability. This never-changing, innocent, always-reliable model is what contributed to, and still contributes to, making the fortune of Christianity in the West. Do statues play a similar role?

Publicly exposed statues are usually majestic. People have to look up to the sky to embrace their entirety. They were sculpted either in heroism, or in intellectualism, or in victimization. They don't sweat under the summer sun, nor do they freeze under the winter snow. Their aspect is changeless. Statues are glorifications or exaltations of human principles, virtues or sentiments. If you want to make a statue of a journalist, you depict them in a reflective attitude while they’re writing an article. You have to visually symbolize this unique, dominant feature, and forget about the rest. In this regard, a statue per se does not differ from a cult image of (a) God, as its role is again to express a perpetual canon, either aesthetic or intellectual, which people may rely upon to feel secure and protected. But while statues are consistent, as Gods are, people depicted by them were not in real life. The equivalent of realizing this would be as if God appeared in human form to humans and started to contradict herself during the sermons, or to occasionally appear incoherent or insecure. This is what humans are, and Indro Montanelli, Winston Churchill or Leopold II of Belgium are no exceptions.

The psychology of protesters who recently came to disrespect monuments worldwide is simple. It has nothing to do—at least directly or primarily—with racism, racial inequality or any socio-economic force that shapes relationships among people. It has to do with the betrayal of a dogma. Dogmatism is the human intellectual position that derives from deification. It’s grounded in security, simplicity and pure Dogmatic people rely on undisputed, simple and innocent truths, which lay the foundations for a quiet, perpetual and pure ideal of life. A non-dogmatic mind thinks: “The statue of Winston Churchill is a symbol of the fight against totalitarianism.” A dogmatic mind thinks: “Winston Churchill is The Anti-Totalitarianism. He saved me.” And nothing else.

Recent vandalism of statues began immediately after George Floyd’s death, and spread incredibly fast. The number of damaged, destroyed or removed statues is so vast that there’s a dedicated Wikipedia page listing them. When we look at pictures of disrespected statues, hallmarks are visible all over them, with the “racist” tag as the most evident one. Emblematic of this are the Albert Pike memorial—what is left of it—and the statue of Robert Milligan. But the latter case is especially informative. Intriguingly, vandals put a bag over the head of the monument. They didn’t bother to cover the entire statue. These observations are essential to understand that people assaulted the monuments because they felt as though they were human beings. They weren’t confronting unanimated, consistent cult images, but rather fragile people with ideologies, who could be targeted, subjected to censorship and, eventually, publicly humiliated.

Once vandals realized that Indro Montanelli not only was an exceptional journalist, but also an Italian colonialist during the Fascist era, they couldn’t take it. This sudden humanization of monuments is a threat to dogmatic people’s inner order and solidity. Their ideal of purity is disproven by the historical fact that Indro Montanelli was a human being, with a life full of contradictions. However, even though their personal identity is devastated by this realization, they’re incapable of picturing alternatives, because their ideal of life and reality is immutable. The only psychological defense mechanism a dogmatic person is left with is projection: they attribute their own intimate failure to external entities. The process of verbally or physically assaulting the source that exposed the fragility of their dogma is common. Statues and their history, in this case.

In the course of millennia, a seed of dogmatism has developed in multiple dimensions of human culture: from religion to history, through to the sparkling world of celebrities.

Religions will never expose their own dogmatism. For instance, the Christian God will not re-appear with human facets to his believers to show clumsiness, fallibility, and untrustworthiness—traits he’d share with them. Furthermore, Christianity is grounded in the belief that salvation will be met in the afterlife, so that believers peacefully accept the physical absence of God in earthly life.

The consistency of statues and their changeless aspect will always dangerously resemble religious dogma. Statues can only occasionally expose the intrinsic contradictions of dogmatic thinking, as happened after George Floyd’s death. Their recent devastation should be considered an alarming and eye-opening phenomenon, given that it took place all over the West, spreading exceptionally fast in the US and in Europe.

Luckily, the world of celebrities is still made of human beings. Andrew Garfield and Ethan Hawke are persons, not Gods. They can still aim at appearing incoherent, impure, multi-faceted, challenging, and vividly fight this process of dogmatization that they’re both victims and instigators of. Statues can’t play this role. They have a precise, sociological function, which is to safeguard the memory of values, principles and sentiments that humanity wishes not to forget. Journalism should be exalted and glorified, despite the fact that its meaning, role and relevance may change during the course of human history. There’s no reason why statues should be pictured as exaltations of human beings, for the very reason that human beings are fallible, and should never be glorified.

There is instead an urgent need for impactful, fragile, living celebrities. Precisely because of their constant deification, celebrities should take the chance to expose their humanness, act inconsistently and show their contradictions: this is the most concrete way at hand to undermine the essence of dogmatism on a large scale.