Not Everybody Can be a Cheerleader

Biden owes the Left but can he deliver and still lead effectively? 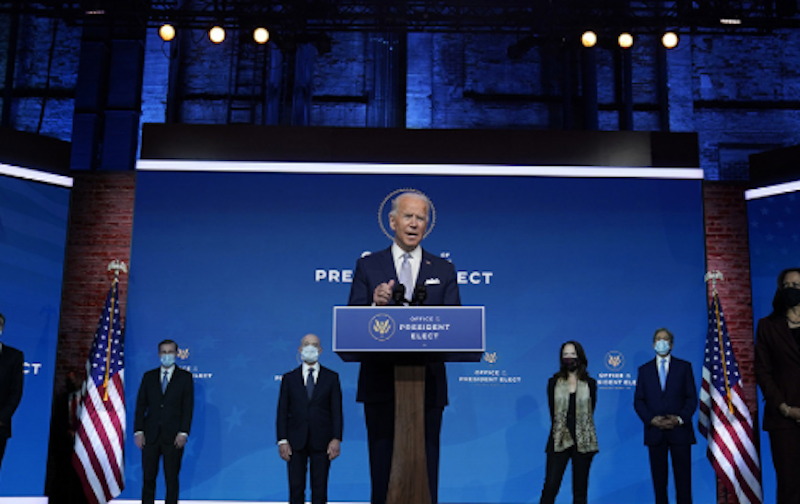 We’re all fundamentally the same. We want quiet enjoyment, mobility, access to technology, an education that won’t turn us into indentured servants, and the opportunity to find a job that isn’t overly dreadful. We want to live reasonably well in the time we have. And we’re not afraid to work hard to earn that living. But we also want serious men and women in power making good decisions. We want to feel there’s still a semblance of justice and decorum in the country and that we’re being represented. We all generally agree on this no matter our ethnicity or our politics, but even Democrats don’t agree on Joe Biden.

We’re facing social entropy, an economic prison, federal dysfunction, continued pandemic, people chosen not for their skill but for their capacity to be inoffensive, and endless identity strife. Biden didn’t create these things, but he rode them to power. And his transition choices are making us wonder whether they’re firmly on the docket for the next four years. We wonder whether he’s deliberately and unnecessarily trolling the right and mollifying the left with his cabinet picks instead of choosing people who will do the best job possible.

It seems like Biden’s still campaigning at full velocity, not for the presidency but for influence over an increasingly divisive Democratic party no longer united by the threat of a second Trump Administration. And no matter who comes out on top in that struggle, we worry that the country will not be governed well (or at all) and that most Americans will continue to suffer. At this point, those of us who voted for Biden have to answer a hard question. Our real vote was actually “not Trump.” But what did we vote for? Whatever it is, we’re about to get it.

We knew this would happen. It always does when threats external to the polis are finally neutralized and the aristocrats turn back to their internecine rivalries and power games. It’s a pattern that unfolds in every political culture to the extent that it’s almost a given. Only, in our present situation, the “nobles,” at least on the left, are ideologically-driven identity groups, each convinced that their time has now come and that Biden owes them royal favors.

They might be right. But the president-elect has no doubt already discovered that one can’t be all things to all people all the time. He’s inevitably making some happy, while others feel rejected and betrayed. As a philosophy student once said to me in Prague, “In Europe, we’ve always known: not everyone can be a cheerleader.” Not everyone gets picked for the squad. Not everyone gets paid (or paid off) for one’s efforts. Not everyone gets appointed consul, even if Incitatus just got the job. Some kids end up going home, dying their hair black, and practicing viola on game nights. Others have to wait until they can try out again. Still others wind up unjustly short-changed forever, whether they have it coming it or not. It all depends. Ask Alexander Vindman. Then ask Michael Cohen. Then ask Michael Flynn.

But the American people know—just as Biden must know—the extent to which social inequality and ethnicity play into every political decision such that the issue of racism remains influential in the United States. For all of Trump’s offensive campaign race-baiting, Biden has been the primary beneficiary. The political and social divisions in America have recently made a lot of people money and put others in the poorhouse—a new mode of class mobility that giveth livelihoods and taketh them away, depending on who gets called out and by whom. One could look at that and reasonably argue that those forces would inevitably elevate any Democratic candidate following a Republican administration like Trump’s. But not without incurring certain political obligations.

Playing on social perceptions of race and class will probably keep benefitting people until the country calms down and focuses on other ways of making itself miserable. The Overton Window keeps shifting. In four years, we’ll still be screaming about race. But who’s making money off that screaming and whether they’re doing it from under a bridge, from Capitol Hill, or from a podium in a newly built University of California lecture hall remains an open question.

No one seriously doubts the fact that race and class have always been conflated in the American political imagination, but issues of racial identity have become so fraught in recent years, especially during Trump’s tenure, that we often see politicians speak of one in terms of the other. For example, Marco Rubio recently described Biden’s cabinet picks as people who “went to Ivy League schools, have strong resumes, attend all the right conferences & will be polite & orderly caretakers of America’s decline." He doesn’t mention the transition team’s intense focus on the skin color of potential nominees, but there’s a strong anti-political-correctness subtext to his language verging on a dog whistle.

At a recent press conference, Biden promised “significant diversity” in high profile positions, while refusing to give specifics or names. Still, regarding the positions of secretary of state, treasury secretary, defense secretary, and attorney general, CNN quotes an anonymous source familiar with the transition discussions admitting that “They're absolutely not going to have the top four Cabinet positions be white.” Absolutely not. That would be anathema.

Many Republicans must feel less than delighted about admissions like this. But as the same CNN article notes, “The bar to meet both the ideological and diversity goals is high. And Biden's concerns about plucking too many Democratic members from the House—now that his party has a more narrow majority—have complicated the conundrum.” It’s no doubt very difficult to placate the implacable, especially when they’ve got a political hook in you and feel that they were instrumental in your rise to power. It’ll be entertaining to watch what happens. It’ll be less entertaining to see it happen in a way that results in further national disintegration.