Blasphemy Trial of Jakarta Governor an Ominous Sign for Indonesia

Religious tolerance and a young democracy are tested. 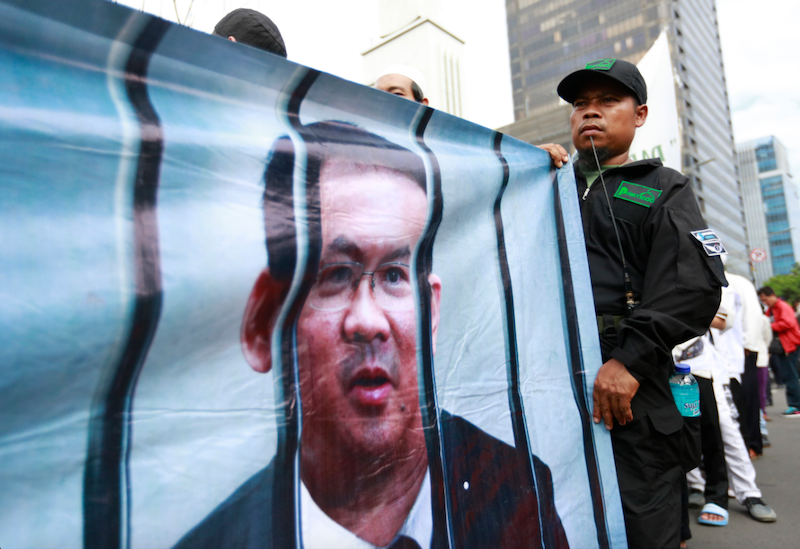 Jakarta governor Basuki Tjahaja Purnama, known as Ahok, cried in court on the first day of his blasphemy trial on December 13. His alleged offense is insulting the Qur'an, which he didn’t do in any way. He’s a politician in a Muslim majority nation, and he's neither suicidal nor stupid.

Some of Ahok’s Muslim opponents had said he's not qualified for election in the 2017 Jakarta gubernatorial election in February, citing verse 51 from of the Qur'an, which some believe prohibits Muslims from living under the leadership of a non-Muslim, citing this passage: “Oh you who believe! Do not take the Jews and the Christians as protecting allies.”

There are mitigating stipulations within verse 51 that make this particular passage sound less absolute to others, which Ahok was alluding to when he said that some were being “deceived" by it (he meant his opponents, not the Qur'an, was deceiving), but after an edited YouTube video of his words many Muslims took his words as a denial of the holy scriptures. An “insult” that could land Ahok, who’s a double minority as a Christian of Chinese descent, behind bars for up to five years.

When the video posted in November it sparked mass demonstrations, stoked by hard-line Islamist groups, of over 100,000 that sometimes descended into riots. This is a setback for the proponents of Islam who point to Indonesia, the nation with the highest Muslim population in the world, as an example of a “moderate” Muslim majority nation. Such show trials on blasphemy charges of prominent politicians simply don’t happen in any moderate, modern nation.

Liberal darling Reza Aslan is a high-profile spokeswoman for Islam who comes across as an apologist for the worst aspects of the religion. Bright, articulate, and telegenic, he's able to get many “fair-minded” (gullible) non-Muslims to take his false claims at face value. Aslan once said that women were “absolutely 100% equal” to men in Indonesia. This would be news to all the female police recruits who are forced to undergo virginity testing as a job requirement. Aslan has also stated that FGM (female genital mutilation) is an African problem that has nothing to do with Islam. He's right that there’s no mention of FGM in the Qur'an, but there is in the hadith, the reason the Shafi’i school of the Sunni school of jurisprudence makes FGM mandatory. Indonesia is mostly Shafi’i, with an FGM prevalence of at least 86 percent.

So much for equality of women in even the most moderate of Muslim majority nations, and so much for the slick peddlers of misinformation like Aslan whose bogus claims are quickly blown up when one out-context-quote referencing the Qur'an goes viral. The fact is that Islam is graded on a curve. A “moderate” Muslim nation in no way resembles a “moderate” Christian nation. Ahok’s blasphemy trial hasn't gotten that much attention from the American MSM, but imagine the uproar if 100,000 Christians took to the streets in protest of a Muslim political leader who'd said something innocuous referencing the Bible. We'd be hearing all about the Islamophobia, bigotry, and racism. Perhaps this double standard is due to the soft bigotry of low expectations.

We often hear that all Muslims are blamed for the actions of a tiny bunch of bad apples when a jihadist attack occurs, but you can't explain away hundreds of thousands of people in the streets in Indonesia over what amounts to nothing with this argument. If Indonesia were truly a moderate Muslim nation, a respected moderate Muslim leader would’ve already come forward and quieted the angry masses. There can be no truly moderate Muslim nation at this point in history, as the hardliners are allowed to drive the agenda.

This sham trial is a symbol of Indonesia's increasing religious conservatism, a regressive global trend that can also be currently observed in Turkey and Morocco. The Western world, at the same time, is trending toward ethno-nationalism and closed borders.

There's widespread speculation in Indonesia that Ahok will be convicted because that's the only politically viable verdict. A legal system that yields to the mob rule of noisy Islamist hardliners does not exist in a true democracy. This case is a test of both religious tolerance and the maturity of a young democracy in a Muslim majority nation, and it's looking to be a failure on both counts. Islam hasn't matured as a religion as Christianity has. It's still not able process any perceived insults and not entirely lose its cool. Muslim spokespeople want to project the image that Islam can coexist with Western values, but the street mobs in Jakarta belie that claim. Ahok’s next court appearance is on December 20. If he's finally found guilty, Indonesia will have taken a big step back into the past.