GOP, Time to Do Something Really Self-Destructive 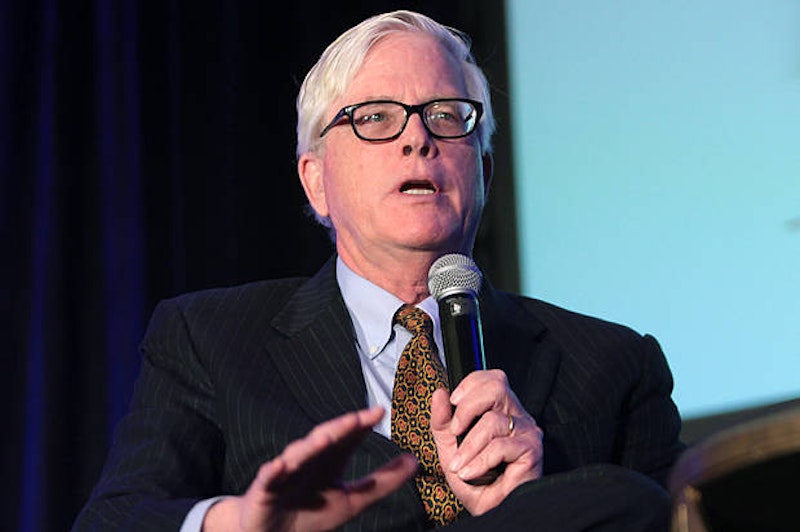 Suicide is the only honorable way out for the Republican Party. There’s no desk where I can leave the pistol, so instead I point Republicans toward the esteemed Hugh Hewitt. The well-known pundit says the party must ditch Donald Trump unless the Big Bloat smartens up and fast. “I want to support the nominee of the party, but I think the party ought to change the nominee,” he told radio listeners. “Because we’re going to get killed with this nominee.” Apparently Hewitt is troubled by Trump’s most recent comments about the ethnicity of the Mexican-American judge in the Trump University case. “The plane is headed toward the mountain after the last 72 hours,” Hewitt said tensely.

Yes, Trump as nominee could mean the end of the Republican Party. But ousting Trump would definitely mean the end. The base has spent years fuming about their leaders’ inability to deliver. No balanced budget, no triumph in Iraq, no repeal of Obamacare, no victory in 2012. Now the base figures it’s been jerked around for a decade and a half. Given this, the very best thing the party could do is ditch the candidate their voters chose and tell the people they’ll take somebody else. There’d be nothing left of the GOP but a big hole in Cleveland.

For months I hoped that’s what the party would do. My hope flamed, guttered, flamed again. The day after Wisconsin my hope burned so bright that I thought it showed the way forward. But then the anti-Trump Republicans decided not to vote. I suppose they looked at the numbers and knew that only Trump could get the nomination through votes, and that a nomination won by other means wouldn’t be worth having. If so, they showed unusual sense for members of their party. Except that their nominee would be somebody obviously—flagrantly, outrageously, energetically, gustily—dishonest, unstable, authoritarian, ignorant and bigoted.

Now the nominee is dashing any hopes that he might calm down and become somebody else. He’s gone from mentioning that his judge is Latino to saying outright that being Latino means the judge is biased. Politically, this is too rich for Republican blood in a country that’s getting less white by the minute. “When the media is debating whether or not our nominee is a racist, we are losing,” says a member of the rules committee for the upcoming convention.

In theory the committee can rejigger the rules to keep Trump from being nominated. In practice there may be a lot of shouting and disputed votes at the convention, but Trump will win unless he drops dead. What’s interesting is to see the nature of the crisis that drives the Republicans. Issuing their statements to the public, GOP officeholders have something to say about the awfulness of bigotry. The committee member, just mouthing off to a reporter, drops that stuff and focuses on the threat to the party. Hugh Hewitt, speaking to the faithful, does the same.

Of course, the Republican Party has depended on racist votes since Barry Goldwater carried Mississippi. Lee Atwater used to talk about keeping the “segs” out of camera range at party rallies. Now the party’s voters have chosen a presidential nominee who race-baits from the podium. The party’s shame is exposed and members must do the honorable thing at last. Republicans, put an end to your misery and ours. Listen to Hugh Hewitt.