Believe Me: Gay Sex Is Happening

Will a post-Don't Ask, Don't Tell world be like the line to audition for American Idol? Will it be like the line at a Balenciaga sample sale? Will there now be more army men in drag on their days off? 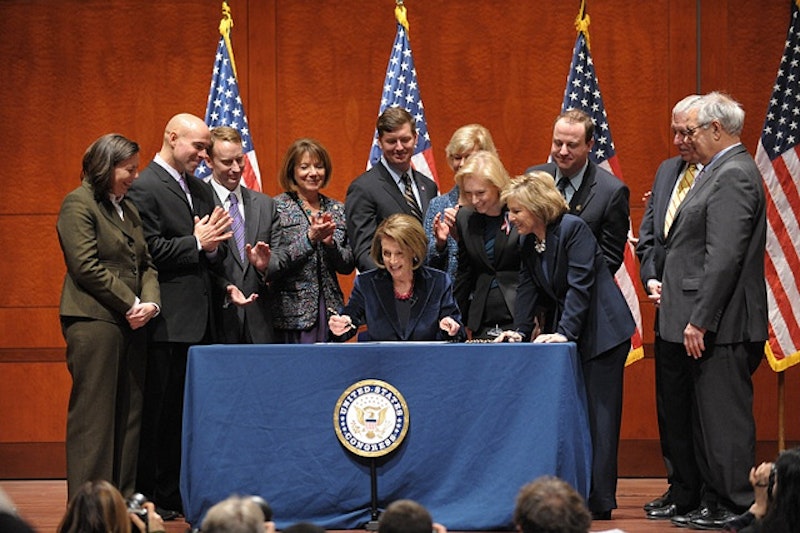 So guess what, you guys? Now that Don’t Ask, Don’t Tell has been repealed, today I’m gonna go to my local Army Sign-Up Office, or whatever it’s called, wearing my Christian Louboutin stilettos and a head-to-toe leopard catsuit and I’ll be like,“Haaay, girl! I can’t wait to serve my country!”

Celebrities like Lady Gaga and gay rights activists alike have been calling for the repeal of DADT for years. Remember when Lady Gaga brought her gays along to the last MTV Video Music Awards? One of them was Katie Miller, a college student who recently transferred from West Point to Yale because of DADT. But earlier this year Miller told the Yale Daily News she would re-transfer back to West Point if DADT were repealed.

Now why in the hell would she do that? Honestly, I don’t get the fanfare around the repeal of DADT. I mean, it is definitely unfair for the 14,000 gays and lesbians in the military to be discharged because of their sexual orientation, and that issue should have been addressed long ago. But, um, out of all the gay dudes and lesbian chicks I know, only one of them is in the military. And he’s not even really in the military: he plays the flute in the army band.

So here’s a question: why are there even gay people in the military, anyway? I’m not saying that all gay people need to be faaaaaaaaaaaaaaaabulous, or that they’re too busy being hairstylists, make-up artists and/or lumberjacks. But I am seriously asking why in the last 17 years gays and lesbians even signed up to join the Armed Forces to begin with, if they knew they weren’t wanted. Take that as a chance to do something else with your lives where you will be celebrated for whom you are, or at least not discriminated against because you’re gay.

I always thought it was a special gay privilege that I couldn’t be drafted to the army. The army often preys on directionless high school students and promises them the world if they fork over their lives to serve this country—which is fine, and everything. But I was always of the mind, “Well, I might be gay, but at least I won’t ever have to be in the army!” Those little outfits are just too damn ugly for me. Plus, I could always rely on the excuse that I would be too distracted by all the hot chiseled men; I wouldn’t be able to concentrate. And that “would not be in the best interests of the armed forces.”

What was the point of DADT, anyway? It’s ridiculous to think that the measure would somehow put a stop to gay sex, if that’s what DADT was all about (it comes around at the heat of AIDS discourse in popular culture, just shortly after the film Philadelphia). But believe me, gay sex is happening. It’s called “situational homosexuality,” and writers have been zeroing in on this for centuries. Edouard Corbière wrote a novel back in 1832 called Le Négrier, which was among the first tales of life on a ship during the French Atlantic Slave Trade. It includes some pretty rad descriptions of male-on-male action, and tales of some of the first legit gay marriages. In 1947, Jean Genet wrote Querelle de Brest, another story about life on a ship that includes NSFW gay scenes.

I can see how DADT made some gays and lesbians feel like second-class citizens because they weren’t allowed to serve. It will be interesting to see if, once the measure is really for real repealed, how many gays and lesbians are just dying to join the army in the first place. Will it be like the line to audition for American Idol? Will it be like the line at a Balenciaga sample sale? Will there now be more army men in drag on their days off?

The part that pisses me off the most is that while DADT was repealed, the DREAM Act burned in hell. The DREAM Act, which to me is a much more urgent social issue, would give permanent resident status to illegal immigrants who went to high school in the US, and who served two years in the military or went to a four-year college. So you know what that means! If you’re illegal but went to a fancy school such as Princeton or, even, a big state school like the University of Texas, we’re not letting you in. America is getting used to its gays. We’re just not ready for them to be well-educated illegal Mexicans yet.