The Fox News generation has made it impossible to have a serious discussion about policy. 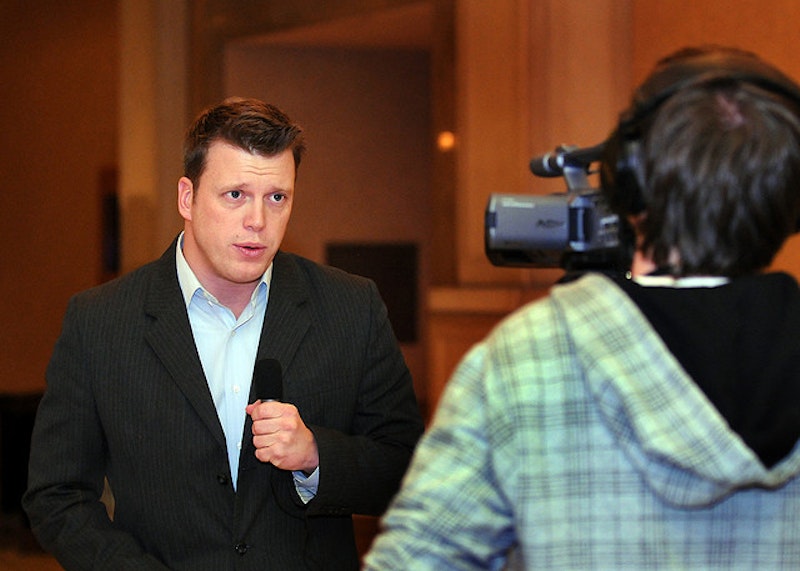 Paul Krugman’s two most recent New York Times columns put forth opinions for why the discredited conservative argument about the economic crisis and free markets has prevailed, as seen by last week’s tax deal and the fact that Rep. Ron Paul, who believes we don’t need regulators and wrote a book called End the Fed, is about to control a House panel that oversees the Federal Reserve. First, big money and corporate power is backing this revisionist story; and second, President Obama has been too meek in advocating for restoring the role of government. But I think the full answer is a more sinister and troubling reflection of the face of today’s Fox News conservatism, which promotes a religious reliance on disinformation about all issues.

In “Wall Street Whitewash”  Krugman explains that the Republicans who participated in the bipartisan Financial Crisis Inquiry Commission, which was designed to “examine the causes, domestic and global, of the current financial and economic crisis in the United States,” pushed conservative talking points and refused to include the terms “deregulation,” “shadow banking,” “interconnection” and even “Wall Street” in their report.

Imagine if the 9/11 commission had left out “Al Qaeda” and “hijacking” in its analysis of the conspiracy.

This is all the more staggering because, as Krugman puts it, the sub-prime mortgage crisis is “a straightforward story,” in which “there was a widely spread housing bubble, not just in the United States, but in Ireland, Spain, and other countries as well. This bubble was inflated by irresponsible lending, made possible both by bank deregulation and the failure to extend regulation to ‘shadow banks,’ which weren’t covered by traditional regulation but nonetheless engaged in banking activities and created bank-type risks. Then the bubble burst, with hugely disruptive consequences.”

But the conservatives tell a very different tale. They blame the collapse on government intervention, particularly Fannie Mae and Freddie Mac: if the meddling politicians had been kept out of it, so the story goes, then the banks would not have been forced to grant mortgages to low-income minorities. To quote Krugman, in this version of history, Wall Street “erred only to the extent that it got suckered into going along with this government-created bubble.”

How could this nonsense have gained traction, especially in the aftermath of America’s rejection of George W. Bush and embrace of Obama? According to Krugman, Fannie and Freddie did not guarantee international mortgages, or commercial real estate, which formed its own bubble, and they entered the sub-prime market only towards the end. Krugman’s first answer is that this “is what happens when an ideology backed by vast wealth and immense power confronts inconvenient facts.”

And his second answer, found in “When Zombies Win,” holds that Obama never implemented serious big-government-type policy—the stimulus consisted largely of tax cuts, led to a decrease in government employment and slower growth in government spending on goods and services than under Bush—but nonetheless allowed the right to mischaracterize his agenda as socialist. In addition, he has failed to combat free market fundamentalism on a philosophical level by embracing Ronald Reagan’s legacy and GOP rhetoric about the need for fiscal austerity in the face of a recession by offering freezes on federal wages and spending.

But I think the whole story is far more depressing.

What we really have with the modern, FOX News-led Republican Party is the emergence of a new, mainstream form of politics in America: one dominated by disinformation about every issue, not just the economic crisis. Krugman’s depiction of the Financial Crisis Inquiry Commission illustrates only in microcosm how this works: conservative politicians refuse to concede basic facts that debunk their outlook, no matter what, and instead try to square the circle.

I personally know hard-core conservatives who get nearly all their information from Rupert Murdoch’s news organizations and can depict just how debased their worldview is: on the day Lehman collapsed I, who at that time did not follow politics, asked them what they thought of the financial crisis. “What crisis?” was the reply. “You know, Lehman went under, and thousands of people lost their jobs and the economy might fall into a depression,” was my incredulous response. At this point I was told not to worry, “this too shall pass,” because “the fundamentals of the economy are sound,” echoing presidential candidate John McCain’s impending ill-fated remark (wonder where he got that idea from).

Soon enough, the realities of the crisis were too clear to deny, and so the story changed. Now, according to conservatives, the crisis was caused by government regulation in the form of Fannie and Freddie and the Community Reinvestment Act (which, according to a report compiled by the Federal Reserve, among many other sources, could not possibly have contributed to the crisis.)

Then the bailouts came. And I was told that TARP was the greatest travesty in American history because it’s an epic, socialist waste of taxpayer money that will only postpone the inevitable—the failure of all the financial firms that are too big to fail. A few months later, these conservatives claimed, amazingly, that “if not for the bailouts the economy would have fully recovered by now” (this answers Christopher Hitchens’ rhetorical question posed in his latest Vanity Fair article condemning the Tea Party: “Does anybody believe that unemployment would have gone down if the hated bailout had not occurred?”).

That the conservative take on the causes of the crisis is astonishingly perverse and false has already been covered. As for TARP, it not only prevented a global financial apocalypse but also turned a sizeable profit. It should be added that, as Timothy Geithner testified last week, the entire government intervention, including TARP, the auto bailouts and the mortgage-restructuring program, will cost only one third of the bailout for the comparatively small savings and loan industry of the 1990s!

This is just one of many examples of how debased conservatism has become. As mentioned above, I previously avoided following politics because I presumed everything is too subjective and that both sides have equally valid arguments. But my position was transformed by a research project I conducted on climate change in college. It was then I discovered that conservatives are dangerously eager to discard or distort all facts that contradict their worldview, since nearly every work of global warming denial I came across was a pack of lies. Then I researched the sub-prime mortgage crisis and reached the same conclusion.

Eventually I came to realize that this pattern occurs across the board. Without any exaggeration, it can be asserted that the very definition of being a “true conservative” nowadays, is to believe that: climate change is a hoax, the financial crisis was caused by too much regulation, TARP failed and squandered countless taxpayer dollars, the only way to create jobs is by cutting taxes, tax breaks pay for themselves, the stimulus created no jobs, health care reform is a government takeover that will balloon the debt, Saddam Hussein posed an imminent national security threat to America, waterboarding is not torture, the Geneva Conventions and American law do not outlaw torture against terror suspects in any case, and the safety net will be the undoing of America unless it is dismantled.

So the question remains—is all this merely the result of corporate propaganda and a failed effort by Obama to win the philosophical case against free market orthodoxy?

This accounts for part of the answer, but the whole story is far more disturbing. The Fox News generation has made it impossible to have a serious discussion about policy, as the Financial Crisis Inquiry Commission illustrates, because conservatism is now a religion, and religion itself influences much of their ideology. Consequently, all the answers are provided and serve as a blueprint for how they view every issue: it’s imperative that they convince themselves that regulation destroyed the economy because to do otherwise would explode their free market faith. And compromise is impossible because their “system” is absolutist (for those who consider the tax deal a conservative compromise, just wait till the Republicans take over the House).

Krugman is right to chalk this phenomenon up to “vast wealth,” but when we consider all the other patently false stories that underlie the conservative narrative, it becomes clear that this is more than a mercenary undertaking: it’s the fruits of a hopelessly brainwashed constituency that would rather see the global economy fly off a cliff than concede that TARP worked and refuses to recognize that there might be some connection between our heavy reliance on fossil fuels and the fact that we’ve seen 10 of the hottest years on record since 1995, when climate scientists formed a consensus about climate change.