Trading in the Big Tent for a Bunker

For decades, Republicans understood that the only way to defeat Democrats in Maryland was to act like them. 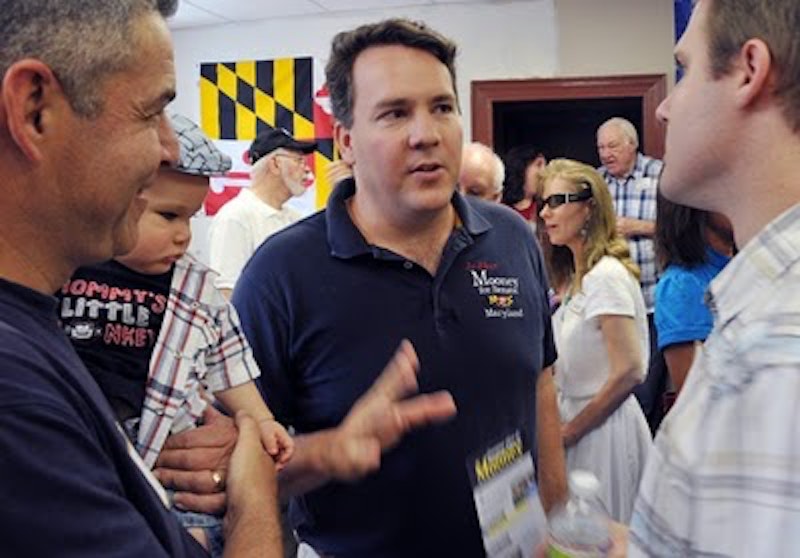 Maryland Democrats have something to say to the state’s Republican Party: Thank you, thank you, thank you for electing Alex Mooney as your new chairman. Just when most political realists are searching for the elusive and ever-shifting center of America’s polarized system, Mooney plans to forcefully drag the GOP to the extreme right. That lurch in itself is cause for celebration among Democrats who view Mooney’s extremism as a tool to tighten their already iron grip on Maryland’s deep blue politics. Pushing the GOP to the right will not necessarily budge the electorate with it.

“Conservative wins,” Mooney exulted in his acceptance speech. “You just have to stick to it and explain it to people. I think we win by not compromising principles.”

Try explaining it to people who reelected Gov. Martin O’Malley (D) by nearly 15 points. And try explaining it to people who ejected Mooney from the Maryland Senate in favor of a moderate Democrat, Ron Young, in what was considered a safe Republican seat, in Frederick of all places. But that, too, may be a sign of things to come as Washington and Montgomery County continue to expand outward into the bedrooms of Frederick County. There is also speculation that Mooney pursued the GOP chairmanship to position himself to run for Congress when Rep. Roscoe Bartlett decides to give up the Sixth District seat.

Most recent polling indicates that the November midterm elections had less to do with party affiliation and ideology than with voter anger and discontent over the partisan mess in Washington. But Maryland, for the most part, withstood the surge, with Republicans losing two seats in the State Senate, including Mooney’s, while gaining six seats in the House of Delegates and control of several local governments. Republicans now control majority governments in 15 of Maryland’s 24 subdivisions—geography but not the all-important population that translates into votes. The heart of the Democratic Party is the I-95 corridor, which brackets the state’s four most populous counties and Baltimore City and helps to give it the two-to-one voter majority that dominates the state’s politics. What’s more, there are now more than a half million registered independents in Maryland who, when they vote in the general election, usually fall into line with Democrats.

One man’s ideology is another’s psychiatrist’s couch. So now comes Mooney, a social and fiscal conservative, whose stern brand of Catholicism infuses his politics, who bragged to Republican delegates that he was a one-man battering-ram against the “homosexual agenda” in Annapolis, a catch-all phrase that in Mooney-speak includes gay marriage and funding for abortion. And despite his Catholicism, Mooney was the single vote on the Senate Judicial Proceedings Committee that prevented repeal of the death penalty from reaching a vote in the full Senate. The inconsistency was not lost on Mooney’s critics. In the Catholic Church’s current “culture of life” teaching, abortion and the death penalty share equal billing as mortally wrong.

For a couple of generations now, political strategists and social scientists have debated whether the Republican party should tack to the far right or mellow toward the more accommodating middle ground. The Tea Party, which is being widely misinterpreted as a tug to the right is instead of the amorphous and ill-defined Astroturf group. Mooney said that as GOP chairman he will embrace the Tea Party and in the process attempt to Palin-ize Maryland Republicans. At the other end of the dial is another nascent movement that is seeking to eschew labels of any persuasion except the anonymity of the center. However the Mooney chairmanship plays out, his election is seen as a clear break from the short, unhappy era of Robert L. Ehrlich Jr., who was rejected in his attempt to reclaim the governorship from O’Malley. So, too, was his running-mate, Mary D. Kane, whom Mooney defeated for the title of party boss.

Ehrlich was, kind of, the latest rendition in Maryland of Republican moderation as governor, although it was never certain as to where he stood or what he believed—as a go-along, get-along member of the Democratic House of Delegates, as a signatory of Newt Gingrich’s “Contract with America” and conservative member of Congress or as a stubborn straddler of both sides as governor.

The Republican tradition in Maryland has always been more liberal than moderate, dating back more than a half century to Theodore R. McKeldin Jr., as mayor of Baltimore and governor, and Charles McC. Mathias Jr., as Congressman and U.S. Senator. In fact, at one time, the most liberal area of the state was Western Maryland, now among its most conservative, because of the strong presence of labor unions representing coal miners and railroad workers. Most Marylanders may not know it, but the Social Security Act, the hallowed centerpiece of FDR’s New Deal, was sponsored by Maryland’s Congressman from Western Maryland’s Sixth District, Republican Davey Lewis. Today, 123,000 Marylanders receive monthly checks.

Even Spiro Agnew was considered a liberal in the mold of McKeldin and Mathias before he became governor. As executive of Baltimore County, Agnew championed civil rights, fought for open housing, formed a human relations commission and as a candidate for governor he actively promoted a progressive income tax for the state, revolutionary actions for the mid-1960s.

Despite Mooney’s pugnacious views on social issues as well as fiscal matters (he voted against the state budget) that may not wear well in Maryland, he has demonstrated an aggressive ability to raise money through conservative channels. James Pelura, the Anne Arundel County veterinarian and GOP chairman, left the party deeply divided over direction and heavily in debt. His interim successor, Audrey Scott, an Ehrlich Administration cabinet official, restored the party to solvency before handing it off to Mooney.

For decades, Republicans understood that the only way to defeat Democrats in Maryland was to act like them. That meant being moderate to liberal in a state with a 33 percent black population, 450,000 union members and where more than one in four workers is employed by some level of government. And now it appears that Mooney intends change that formula for one that hasn’t been tried in Maryland since, say, George C. Wallace ran for president in 1968 or since George P. Mahoney ran for governor in 1966. And they were both Democrats.