Back in the USSR

Except this time we're afraid of something more vague than geo-political chess games or nuclear annihilation. 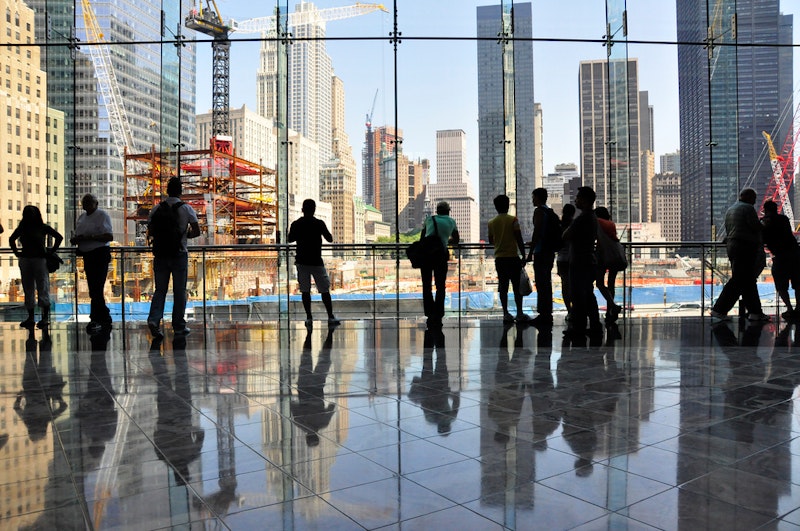 From time to time, in conversations with friends and colleagues, I’m surprised when someone tells me he or she didn’t participate in the National History Day. We’re all pretty familiar with the National Science Fair (bah, my baking soda volcano was a sure thing); the historical version is the same idea, though divided into several categories like research papers, tri-boards (like the science fair), performances and short films.

Each iteration comes with an umbrella theme; one year was “immigration” (I wrote about the Irish Potato Famine); yet another, “thresholds” (paper on Sputnik); another, political revolution (short film on Lech Walesa and the Polish Solidarity Movement).

I made it to the nationals three years in a row. That may have had something to do with that fact that I lived in DC; DC, as you might imagine, doesn’t really have a “statewide” level of competition, and so it wasn’t particularly difficult to advance to nationals (especially in the film category). College Park, Maryland, hosted the nationals and so, for friends and me, the nationals weren’t so much a celebration of our unparalleled intellects but more of a “sweet, time to chase girls and play poker when the girls took bus tours of DC” situation.

Regardless of the year’s theme, every year saw a lot of the same stuff, particularly anything and everything involving World War II and/or the Cold War. They were the two defining events/eras of the 20th century, and their spasms of revolution, genocide, immigration and technological innovation are readily relevant in the context of the National History Fair.

The Cold War—the start and end of, the space age, soft capitalism, manufacturing, espionage, the military-industrial complex, Vietnam, McCarthyism, imperialism—was all over the place. I wandered through the rows and rows of tri-boards filled with artfully matted photos of concentration camps, gulags, fields of rice patties, kids cowering under desks and hilarious ads attempting to put a sunny side on the near-inevitable end of the world via nuclear holocaust.

The Soviets were the all-pervasive Other; a culture of fear and hair-trigger apocalypse permeated American culture (I mention this in my review of Fred Kaplan’s 1959: The Year Everything Changed). My father occasionally brings up small scraps of memory from that time period and, ultimately, those scraps are a part of the messy heap that is my understanding of the Cold War as a cultural force.

It seemed everything was shot through with fear, from manufactured products and their respective advertising campaigns to politics at every level.

Parallels are impossible to come by; Mark Twain famously quipped, “History doesn't repeat itself, but it does rhyme.” Today, nearly nine years after September 11, 2001, the fear, bigotry, hate and xenophobia surrounding Islam and its practitioners has reached a high-water mark. And while today’s climate of fear falls far below the possibility of nuclear annihilation 50 years ago, there is some sort of off-rhyme scheme happening here.

Some of the top brass on the Right—in terms of influence, political office and audience—have rallied against the building of a YMCA-style community center near the World Trade Center site. That there are strip clubs, actual mosques and various other “offensive”  establishments near that site is of no concern; that these small-government, states-rights conservatives don’t see the painful irony in paratrooping into a local issue is of no concern—what remains is the fact that the entity behind the project is the Cordoba Institute, a progressive Muslim-American organization that seeks to alienate the insane jihadists and zealots from mainstream Islam.

This is a defining moment—not just for America but also for conservatism as a political philosophy. The campaign to prevent the construction of a Muslim interfaith center two blocks from Ground Zero strikes me as so dangerous in its assumptions, so pernicious in its bigotry, and so dangerous in the war on terror that it needs to be repudiated as swiftly and as powerfully as possible. It is as antithetical to the principles on which this country was founded as the importation of torture into the government of the U.S

And it is my feeling that President Obama is ducking this “defining moment”:

Robert Gibbs, spokesman for President Barack Obama, told reporters at a White House press briefing today that the mosque plan “is rightly a matter for New York City and the local community to decide.”

While saying the Obama and Bush administrations have emphasized that the U.S. is “not at war with a religion,” Gibbs said the White House is “not going to get involved in a local decision.”

Not that a “Philadelphia Race Speech” is going to make Tea Partiers drop their signs and start hugging Muslims, but I can’t help but feel slightly helpless as the Right, mainstream media and our elected politicians allow this shameful display of American callousness to cycle through the day’s wash again and again, bleeding over into nearly every other part of our discourse. My hope now rallies around New York Mayor Michael Bloomberg, of all people.

The fear I experienced on 9/11 was immense. My mother worked on Capitol Hill and all the phone lines were jammed. But a little over a year later, John Allen Muhammad and Lee Boyd Malvo killed 10 people in the DC metro area. The DC Sniper caused schools to cancel all afternoon, outdoor activities after a teenager was shot; a man was killed mowing his lawn; another, pumping gas.

One of my clearest memories of high school came from that time. I was heading out for the afternoon and I asked my father for the car keys. The car needed some gas, he mentioned offhand, to which I half-jokingly replied in ominous tones, “I don’t know about that.” He turned, looked me straight in the eye, and told me that you’re not allowed to be afraid of these people; that once you let fear dominate your basic decisions, you’ve lost something. I don’t remember the exact words, only the tone of his voice and the look in his eyes. I calmly turned around and went out and filled up the car; a few weeks later Muhammad and Malvo were caught.

I cannot completely understand the trauma of the Cold War—it’s not physically, emotionally or philosophically possible. But I do know fear; I do know the crippling effect the loss of agency—over what is Good and what is Just—can have. The invective and hate surrounding the innocuous building of a community center has saddened me in a way unmatched since 9/11, since the DC Sniper. It’s a tangible spasm, a ripple of the historical record, and a set of bullet points to be pasted up on tri-boards 50 years from now.