Every Year Is The Year Everything Changed

We just haven’t written a book about each one, yet. 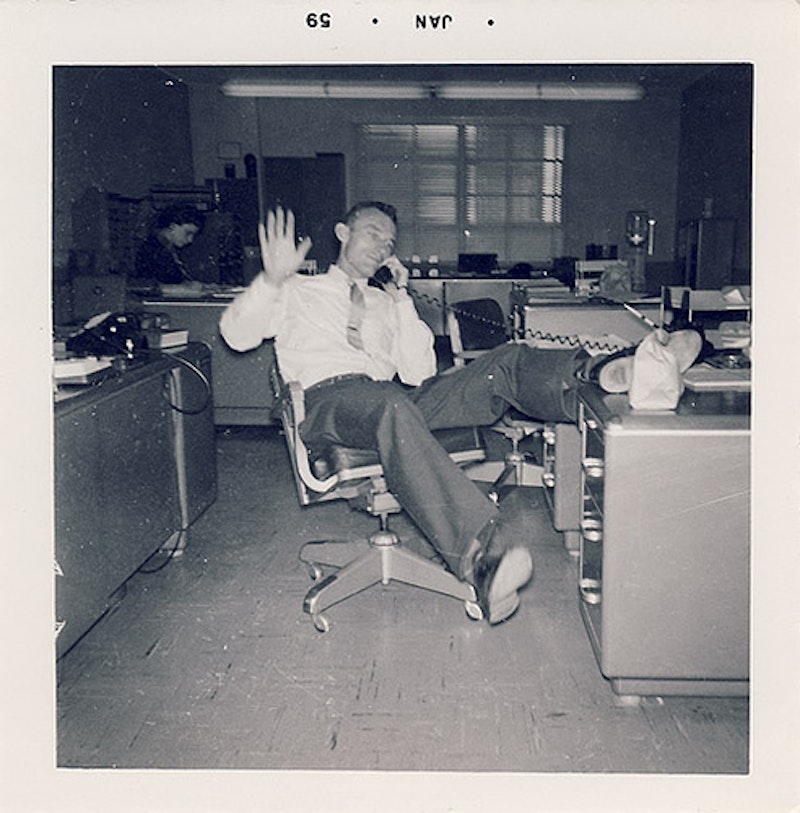 I’m about a year behind the party and after-party surrounding Fred Kaplan’s 1959: the Year Everything Changed (it inspired quite the run of nostalgia from Russ Smith), but bear with me for a moment. Kaplan, a prolific journalist covering music and pop culture and foreign policy (currently at Slate), attempts to recalibrate our collective notions of the 60s, insisting that by 1959, many of the forces that so catapulted the US (and the rest of the world) into the modern era were already well underway. His book is a quick read; the chapters are capsule-like, each a finely edited (barring a couple of typos) sound bite with a distinctly Wiki-vibe. You can tell he’s a seasoned columnist.

A few articles below this one is Robert M. Downey’s sprawling and fascinating take on the proliferation of abulia in modern pop culture. In short, our limitless arrays of choices and opportunities have rendered us incapable of making decisions, since we are so paralyzed by every other road not taken. It’s a disheartening reading of the present situation, and I’m not entirely sure I wholly buy into it. What resonated with me most was his notion of “narratives”:

First, I think it's a symptom of an overexposure to narratives. By narrative, I mean anything from a novel to a film. From the way in which a tweet or a text message or a Facebook wall post infers a background story, to the way that something as simple as a headline tells a story. I don't mean so much the order of contingent events that leads to others, but rather the myriad ways in which they are told, consequently implying the ways in which events are seen.

In a sense this is not a new paradigm: What is the taking down of history if not to make sense of the various trajectories and upheavals and triumphs and tragedies that brought us here to this day to write this book? And what is the vast majority of art if not the culmination of those trajectories, either through acceptance or rejection? There is something utterly natural in narrative, in storytelling, in adventure and fantasy as a means to verbally, aurally, visually and textually continue to drag the entirety of our past with us from generation to generation. There is no religion, no civilization, no philosophers willing to out-think themselves outside of the norms of humanity’s analytical capabilities, without history and a sense—either nihilistic or triumphalist—of self.

Kaplan’s book is such a quick read, so gentle on the eyes and on the brain that it’s easy to miss what he’s doing: recalibrating history, rethinking how we digest and interpret our past(s).

If I’m convinced of the book’s success, it’s solely because every text on the 60s—whether it examines journalism, music, politics, literature, art—can hardly move from paragraph to paragraph without mentioning how insane it all was, how “the forces that shaped society” were powerful, breathing koan-like ribbons of purple prose on the sainted figures of the underground, academia, government and the art world. Kaplan avoids this cultural hagiography by dint of brevity; he simply does not have enough space to wax too ridiculous over all that amazing shit that went down just before the 60s.

If the book’s purpose is to dial back the worship and fetishism of the 60s, it must do so by playing by the same rules of the worshippers and fetishists: “No, you see, 1959 was when it was all going down,” when in fact it’s pretty easy to take a chunk of time—the years between, say, 1959 and pick-a-year-in-1970—and list enough technological, political and cultural “upheavals” (they love that word upheaval) to say with enough confidence that “196x was actually where it all went down.”

So as Kaplan makes a fantastic stab at deflating the pageantry around the 60s, he does so on the same terms as that very pageantry. The narrative: the ever-present narrative. You can’t really understand the upheavals of the 60s without knowing the upheavals of 1959, Kaplan is saying. And so soon I’ll write a book that says, well, WWII was the seminal event of the century and all things hence must be read as a ramification of the disasters, triumphs and evolutions set in motion by the Second World War. “Alas, no, the Enlightenment … ”—and so on.

Hendrik Hertzberg’s blurb on the back reads:

It turns out there’s only one degree of separation between Miles Davis, the brilliant jazz innovator, and Herman Kahn, the Strangelovian nuclear-war theorist—and his name is Fred Kaplan. No one else could throw this fabulous cocktail party of a popular history, terming with defiant hipsters, visionary inventors, artistic rulebreakers, and troublemakers of all kinds.

(“And his name is Fred Kaplan.” Koan-like, indeed.)

The best metaphor for this book—either as criticism or praise—is comparing it to a cocktail party: light on carbs, heavy on the boozy anecdotal. (Check this, one night at the 5 Spot in New York, poet Kenneth Koch read out of a phonebook while Larry Rivers honked randomly on a saxophone he had no idea how to play. Ornette fucking Coleman says, “Man, your poems are weird.” Ornette fucking Coleman.)

The deepest idea Kaplan elicits is the existentialism surrounding the threat of nuclear holocaust. The chapter “Breaking the Logjam, Hitting the Wall” ends as such (emphasis his):

The Cold War wasn’t only, as Allen Ginsberg bemoaned, ‘the imposition of a vast mental barrier.’ It was also the existence of a vast physical and political barrier that blocked and shaped the course of human activity. Certain kinds of breakthroughs were simply not going to happen until that bigger wall came tumbling down.

The first half of the book relies heavily on placing the movements of artists and academics and political figures within the context of the Bomb, bestowing a sort of “how can we go forward into the future” sense of dread. And yet culture did its thing, and in 1960 a whole lot of other amazing stuff happened. Same thing with 1961. And 1958.

We are nothing without our history, our collective sense that all things and action actually and eventually make sense. From time to time, someone is so moved as to decide which year, decade, generation or century must be born anew with—and weighed down by—a parachuted purpose.