The Quirks of Capitalism

Captains of industry are guilty of many transgressions. 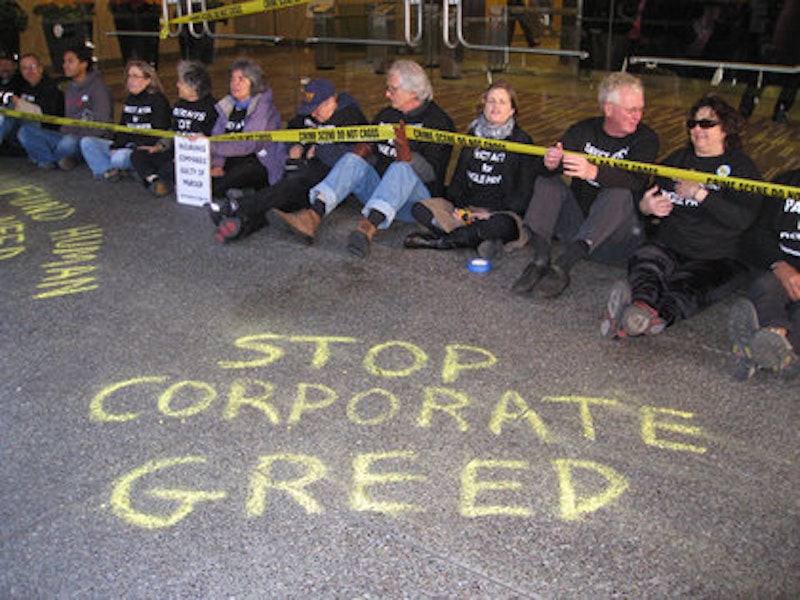 The person who delivers the newspaper every morning at six o’clock is not a teenage newsboy but an older black woman in her 50s, maybe 60s. It’s doubtful that she makes the minimum wage of $7.25 an hour. The crab pickers who travel to Maryland’s Eastern Shore every spring are borrowed itinerants from Mexico. They are paid by volume, not by the hour. At least half of minimum wage workers are adults on the job full-time, forced more by circumstance than by career choice. Some even have college degrees.

There’s a claim that about half the workers at Walmart receive food stamps to supplement their minimum wage incomes, which means that taxpayers are subsidizing the nation’s largest employer by billions every year so corporate headquarters can fatten its profits. Boeing, the aircraft and defense contractor, recently beat down unions by threatening to move Seattle plants and jobs to other states. After winning labor concessions and deciding to stay put, Boeing ordered a stock buyback. Who owns much of the stock? Boeing’s top executives, of course. Screwing union workers is part of their compensation package.

By contrast, Costco, one of the nation’s most successful merchants and a role-model employer, pays its workers at least $11.20 and upwards to $20 an hour, almost triple the minimum wage, and the wholesaler’s success is reflected in its bottom line. To emphasize the point, President Obama made a follow-up pitch for an increase in the minimum wage to $10.10 at a Costco in Glenarden, MD, on the day after his state of the union address.

UPS, the ubiquitous Big Brown, is another exemplar employer. Its brown-uniformed drivers can earn upwards of $100,000 a year, with overtime, delivering packages from morning until night under industry contracts with the Teamsters Union.

It’s been nearly a decade since the poverty-level wage floor was raised to its current $7.25 an hour, or $15,000 a year for a full-time worker. Since Obama took office in 2009, the stock market has doubled, from about 8000 then to its current off-the-charts Las Vegas-frenzy high of near 16,000. The most recent figures show that fourth-quarter growth was a zesty 3.2 percent and unemployment was down to 6.7 percent. The Federal Reserve is beginning to taper its bond-buying as the economy rebounds and the stock market took a dive, proving once again that the loudest free-market proponents are the government’s biggest corporate welfare clients.

And therein lies the quirk in capitalism. The captains of industry are guilty of at least two major transgressions: They are either (1) hoarding money or (2) remitting it back to themselves or their stockholders and bypassing workers altogether.

Corporations are sitting on nearly $3 trillion in profits, either stockpiling money to enhance the appeal of their spreadsheets and meet Wall Street projections or to use for stock buybacks to reward stockholders and themselves.

They refuse to invest in equipment or expansion, they say, because of a lack of demand. Yet an increase in wages, bonuses or benefits for workers would free up money to create demand which, in turn, would stimulate supply in the never-ending roundelay that is a consumer-driven economy. Eighty percent of the American economy is based on consumer activity. As the economist and New York Times columnist Paul Krugman observes, “My spending is your income and your spending is my income.”

Most Americans are familiar with the growing disparity in the distribution of wealth and the decline of social mobility. Fifty percent of the new wealth that’s generated is going to one percent of the population. At the same time, wages for the bottom 50 percent have stagnated over the past three decades while prices have steadily risen.

The board of J.P. Morgan, for example, recently voted to increase CEO Jamie Dimon’s salary from $11.5 million a year to $23.1 million despite the fact that the company was forced to pay the government $20 billion for its many misadventures. At the same time, red delicious apples at the local supermarket cost $1.99 a pound, or a little more than $1 an apple. Try eating healthy on a minimum wage budget. (The new farm bill cuts $8 billion from the food stamp program (SNAP) but will provide up to $20 million to encourage food stamp recipients to buy healthful food at local farmers markets.)

The disparity is due, in large measure, to the decline of labor unions that for decades had a voice at the bargaining table to make certain workers received their fair share of corporate profits in the form of wages and benefits. And this assurance, in turn, preserved a balance in the economy and a fair distribution of wealth across the population. That kept spending apace with supply and demand.

As membership in labor unions has declined dramatically to about eight percent of the workforce, the number of membership cards in public-sector unions has grown in direct proportion to the loss in the private sector. Public-sector unions, and organized labor in general, may experience another massive setback, though, with the Supreme Court prepared to rule on the legality of the so-called “agency fees” that unions charge for members and non-members alike who are covered by contracts but don’t want to pay dues.

The pencilnecks in the oxymoronic think tanks such as the CATO Institute and the Maryland Public Policy Institute, argue that a majority of people in minimum wage jobs are kids working part time to earn spending money for, say, a pair of the latest flashy gym shoes or baggy jeans. The same research reveals that about half those in minimum wage employment are adults, many with families, working full-time but nonetheless living at or below the poverty level.

The extension of their reasoning is that increasing the minimum wage would cause lay-offs, a reduction in the workforce, reduced working hours and increased prices for consumers. In the MPPI manifesto, the proposed increase was described as “counterproductive to the poor,” a “crude government intrusion,” and “not enough to make a difference.” Tell it to a husband and father scouring grease trays at McDonald’s. It never fails to amaze how the most tight-assed conservative ideologues in America claim to know what’s best for the poor.

Nonetheless, five states have already raised the minimum wage and others have increases on their dockets. In Maryland, Gov. Martin O’Malley (D) has proposed raising the basic pay to $10.10 an hour but is meeting resistance from rural lawmakers and even the legislative leadership who argue that a one-size-fits-all increase cannot be applied uniformly across the state.

This is unusual for a Democratic state that is heavily influenced by organized labor and relies on unions for campaign cash and support. But two counties, Montgomery and Prince George’s, have already raised their bottom wages to $11.25 an hour, $4 higher than the state’s existing minimum wage.

As a symbolic gesture, Obama signed an executive order increasing the future minimum wage for government contractors to $10.10 an hour, hoping to establish a paradigm for Congress and the states. Obama has encouraged the states obliquely to proceed with the hike rather than wait for a reluctant Congress to act.

In his fifth state of the union speech, Obama called for a “year of action” with or without help from Congress. Let see if he means it.