Thinking About Drones and Feeling Good

The mind does things that you don't want it to do. 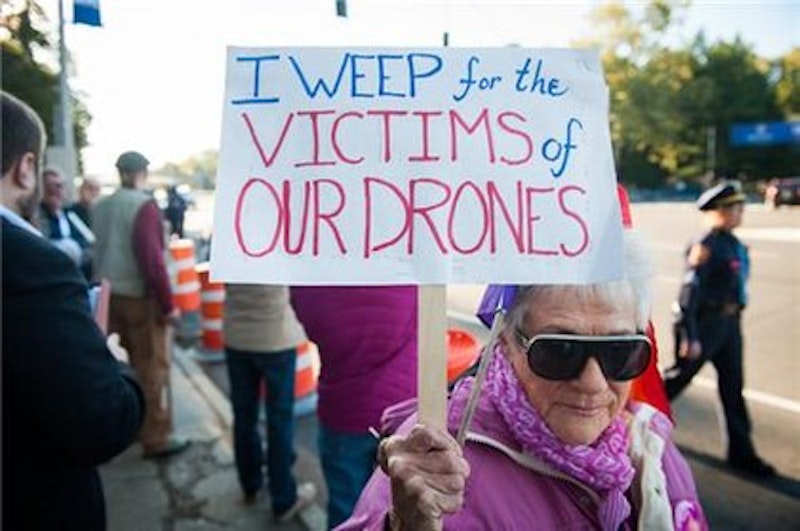 The other night Jon Stewart slipped in a long, archly phrased jab at Barack Obama for being like George W. Bush on national security. This means liberals are feeling some confidence about the election again. After October 3rd we weren't thinking so much about drones. Now we're edging up to our late-September mode of thought.

Back then Mitt Romney seemed sure to go down. Now we can't tell ourselves that, but we know all over again that he deserves to. Obama outclassed him over the course of the debates, and Romney kicked in enough of his jittering-and-blinking moments that one is reassured. Yes, he is the same man as this spring and last fall. Nature intends him to lose; we'll see if nature follows through.

With our chins this high up, we can cast our eyes again at the drone question and civil liberties. Quickly, just a glance, but enough to feel like we have our old horizon back. Yes, our concerns still extend that far. We are thinking of the villagers in Pakistan, not just those bastards and the tax plan that doesn't add up. We are taking our situation in the round, the downside of American power and not just the up. We are signaling to ourselves that our brains have some life beyond loyalty to the team in Washington. So Stewart has the heart to stick in his jab about Obama's over-harshness, a comically extended sentence that finishes up by saying he's like Bush. (The gabble of words almost keeps you from noticing. Bush, a mere throwaway. I remember when naming him was like naming the Devil.)

The right has its version of this game. They'd love to be up in arms about Moderate Mitt showing up for the debates. If Romney does win, they'll roast him over the words he used there. Every time he gives them an inch less than what they want, they'll haul out debate quotes where he sold the cause down the river. But for now they'll take what they can get.

A disgraceful spectacle. I think liberal confidence at full inflation is best represented by me watching the “Obama 99” clip, something I did a lot just four weeks ago. Basically, left-wingers took a Jay-Z song about having 99 problems, and they replaced “bitch” with “Mitt.” Video clips of Obama voice each word of the lyrics until the cop comes on, at which point there are video clips of Romney doing the words. The clip that goes with the “Mitt's not one” bit is a classic of Romney experiencing social unease while at a podium. The answering clip of Obama has the president tilting his head with a big grin.

The blog that steered me to this very satisfying clip apologized about the lyrics, which were considered not quite the thing. They're certainly far to the left, maybe to the left of CounterPunch. They say the election's a fake anyway, and they imply that Fast and Furious and the birth certificate business are tips of an iceberg, namely Obama's involvement in giant plots behind the scene. But that aside, the video's kicker was “I have a dream” (voiced by Martin Luther King) matched with “I have a drone” (voiced by linked-up bits of Obama's voice). There was a point I could accept. Mentally, I factored out the conspiratorial stuff and kept the anti-Mitt triumphalism and the drones. It was a combination that worked on me. I felt better about myself—serious even while I was gloating!—and the thought of the missiles made the video's Obama seem scarier, and therefore more menacing to the cringing Mitt.

I don't know the last time I saw the video, but it was certainly before Oct. 3rd. Since the first debate I've kept my nose clean; I don't want vainglory, I just want us to survive this and keep the Republicans out of the White House. But I am thinking about drones again, and so is Jon Stewart. That's a sign of life in some way.