They're laughing, but she's introducing concepts that won't disappear. 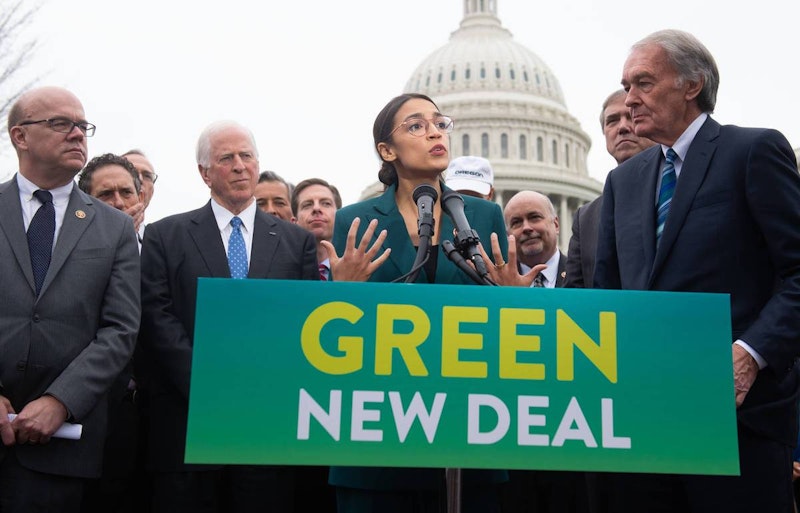 Heads were “exploding” on Thursday when it came out. By the time The Wall Street Journal’s Kimberley Strassel finished reading Alexandria Ocasio-Cortez (D-NY) and Massachusetts Sen. Ed Markey’s plan to revamp the American economy, she was laughing so hard she almost cried. Conservative pundit Ben Shapiro was cackling hysterically on his podcast. One Twitter wag said the Green New Deal was strictly for methhead Millennials. Many progressives, however, view it as the long-overdue blueprint needed to address the crisis of our time—climate change.

There was plenty of fodder for laughter in the document, like the absurd plan to eliminate air travel by building an extensive European-style train system. That would cost trillions, so there was the usual chorus of, “How do we pay for this?” These fiscal skeptics weren't comforted when AOC went on NPR and explained that not all government spending is funded by taxes. Such heresy!

Hearing that opinion spoken out loud rendered some of them verklempt. Many probably flashed on the specter of hyperinflation, one of their favorite bugaboos they falsely believe is caused by government over-spending. This despite the fact that Republicans are quietly recognizing that deficit spending’s not all they used to crack it up to be now that the party's added $5 trillion to the national debt with war spending and the Trump administration’s tax cuts and the economy's purring right along.

In going public about how federal—and only federal—spending is decoupled from tax revenues, AOC broke new ground. Here was an elected official tacitly endorsing the principles of a rising school of thought called Modern Monetary Theory—MMT. The political sensation from New York was careful in saying that “not all” spending is funded by federal tax dollars, as under MMT the government doesn't have to collect a dime no matter how much it spends. Perhaps she’s slow-walking the theory out to the general public, which isn't a bad idea given that not having to tax to spend’s a concept that's counterintuitive at first glance. This is due mainly to the misconception—and politicians and the media spread this—that the federal government labors under the same fiscal constraints as your average household. Everyone’s heard the argument: You can charge things to your card, but eventually you’re going to have to pay for them, and the same holds for the government.

That’s not how it works according to MMT. The national debt, which is now over $20 trillion, isn't like your Mastercard debt, which you can’t produce U.S. dollars to pay off. But the federal government can produce dollars, by spending them. The core concept of MMT is that the only limitation on federal spending is inflation. If there’s enough manpower, technology, and factory capacity to produce something, then the government can afford it, regardless of the effect on the national debt.

To envision the MMT position on deficit spending, think about a bunch of beavers with free time. If there are sticks available, there’s nothing standing in the way of them building a dam, which is going to improve their lives, and it's not going to put them in debt. If they have to take the sticks or their labor away from another important project to build it, then there's a problem.

AOC ran into a common misperception that the media helps to perpetuate during her NPR appearance. Host Steve Inskeep said that her proposals for massive increases in renewable energy production, like wind and solar, require deficit spending that will eventually have to be paid off. This reflects the conventional misunderstanding, held even by liberals in the media, that the national debt will eventually have to be paid back. This goes back to the flawed government/household fiscal analogy they can't get out of their heads because it's supposed to be such obvious “common sense.”

When the government sells Treasury bonds, which is how it “borrows” money, it's not like putting your trip to Hawaii on a credit card. When people buy Treasuries, they're just swapping their dollars, or some other currency, for a different kind of money—one that pays interest. This isn't “borrowing” in any significant way, like taking a mortgage, and it's not a crippling burden that future generations will inherit. A climate seriously damaged by carbon emissions, however, would be exactly that.

But somehow people like Steve Inskeep—and libertarians, in particular—want to keep the idea alive that the U.S. will have to someday repay the entire $22 trillion “debt” off, because all rational people know that borrowed money must eventually be paid off. This isn’t going to happen unless we get politicians crazy enough to destroy the economy to remove some accounting numbers they don't like.

Some of the proposals in the Green New Deal are ill-conceived. AOC’s critics pick them apart while talking about Venezuela and the prospects of $125 hamburgers, but she's been in Congress for just a few weeks and she's now got all the major Democratic presidential contenders lining up behind her new plan. She's driving the conversation and introducing new concepts that are not going to go away. It takes courage for politician to talk about government spending like she does.

Many of those laughing at AOC are the same “experts” who’ve been telling us for decades that the national debt will destroy us, and that tax cuts pay for themselves. People should’ve been laughing just as hard at them all along as they're laughing at AOC now.