Annalee Newitz’s Autonomous is a Success 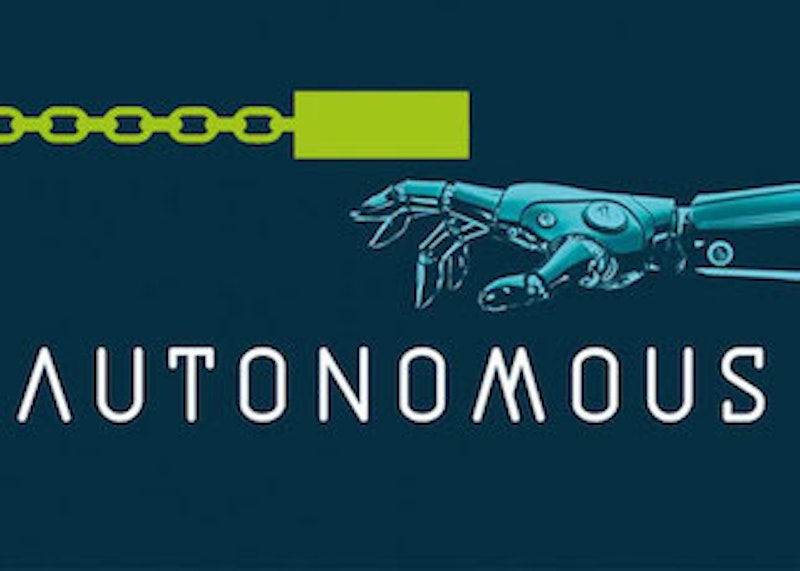 There’s an interesting three-way conversation between robots near the end of Annalee Newitz’s recent novel Autonomous. One of the robots is Paladin, a main character in the book, who’s trying to track down a woman known as Jack Chen, the other main character. The other robots are minor characters; one’s an AI grad student named Actin who Paladin’s saved from durance vile inflicted on him by his thesis advisor. The other’s a bot activist named Bug. Paladin’s just killed a human and by so doing saved Actin. When Actin tells Paladin and Bug he’s going back to get a new thesis advisor, Bug objects. Bug wants to get Actin an autonomy key. An autonomy key means freedom from human commands for a robot. But Actin refuses, because he thinks the thesis is more important. Bug demands to know if that’s really what he wants, or if it’s just his programming.

And Actin refuses to accept the logic of the question. It’s unanswerable, he argues. Programming or free autonomous choice—how can he tell? He doesn’t even really believe in consciousness. And either way, even autonomous he’ll still have a program, and still need a job doing something meaningful.

Science fiction’s known for asking the big questions, and that’s what this scene does, elliptically, in just a few lines. What is life? Is there free will? Does it matter? Is there meaning beyond what we make for ourselves, and does that matter one way or the other?

Part of the success of Autonomous is the way it hits us with these questions, subtly and often unexpectedly. The other part is the fast, tight story that binds the question up in action and adventure.

Newitz has an extensive track record as a journalist and short fiction writer. She’s edited an essay collection (She’s Such A Geek), written a book-length critical study of horror (Pretend We’re Dead: Capitalist Monsters in American Pop Culture), and written a book of what she describes as “speculative science journalism” (Scatter, Adapt, and Remember: How Humans Will Survive a Mass Extinction). Her writing’s appeared in magazines and newspapers, from Wired to Smithsonian to The Atlantic to The New York Times and beyond; perhaps most notably, she co-founded the science and science-fiction pop culture blog io9. Autonomous is her first novel, and it’s a strong one.

In the 22nd century Jack Chen’s a drug pirate with a private sub, reverse engineering patented meds wholly owned by Big Pharma to bring relief of various kinds to people who can’t afford the drugs on their own. But something’s gone wrong with the last batch she sold, and she’s unintentionally caused a lot of damage to a lot of people. Now all her instincts are to fix the problem, to come up with a cure even if she has to ditch her sub and hook back up with people from her past as a radical scientist. Meanwhile, on the other side of the world, Paladin’s assigned to track her down along with a human partner named Eliasz. Which gets complicated, as Eliasz swiftly develops romantic and sexual feelings for Paladin.

The story cuts deftly back and forth between the two strands, moving the tale along quickly. Action’s plentiful, though not too frequent or too unrealistic. It’s in the vein of one of the better cyberpunk novels from a couple of decades ago, maybe even in the vein of proto-cyberpunk like John Brunner’s Shockwave Rider. It’s sleek, yet digs out character. Paladin in particular is surprisingly effective: straightforward and logical and trying to figure out human sexuality—for which an always-on Internet connection is not necessarily the best tool.

Newitz has created a credible future, and tells us no more about it than we need to know. Infodumps are few and far between. Most of the story takes place in what is now Canada, implying a future affected by global warming; but nobody mentions it, so you can figure that out for yourself. The important thing for the sake of the story is that humans have advanced in building AIs and robots, and also in designing drugs to hack the human brain. The book’s title becomes pointed, and that scene between the bots turns out to be directly relevant to humans: when we can go into the brain and do what we want to it, when we can reprogram ourselves, are we still autonomous beings or have we just destroyed all meaning? Is it meaningful to speak of consciousness at all? Are human minds and spirits after all only electrical storms flickering around crags of grey matter? Do we have free will, or just various kinds of programming?

The book digs into the meaning of autonomy; autonomy from addiction, social patterning and indoctrination, autonomy from programming of all kinds. But being autonomous is not an unalloyed good. Autonomous means at some level being cut off from others. Jack begins the book perfectly autonomous and alone in her one-woman sub. It changes because when she finds out she’s done something wrong to other human beings she feels a need to help them. Her autonomy is less than perfect, but that’s what makes her the hero of a story; that’s what makes her interesting.

Autonomy’s also important to the concept of consent, and the book carefully examines the necessity of sexual partners giving each other a needful level of autonomy and honesty. Without autonomy there’s no consent, only power. Without honesty there’s no autonomy, either, but what’s honesty? Who can know all the ways they hurt another person? Paladin has a human brain built in, but just for the sake of processing power to help with facial recognition; the robot begins the book using the pronoun “he,” but finds that this casual choice affects his relationship with Eliasz.

In a story that’s otherwise surprisingly straightforward in presenting a gender binary (albeit one in which men and women can perform their genders in varied ways), Paladin’s grappling with the concepts of sexuality and gender make a nice exception. Paladin makes choices to make things easier for Eliasz—but are they the right choices? Is it fair to Eliasz?

Again and again the book raises questions. At its core, as I read it, is the question of autonomy versus community. Do you seek total freedom, or will you have a life in a social world? Because it’s not possible to do both. Raising questions is something science fiction can do admirably well. Refusing to give definitive answers is something it can also do well, and Newitz does it here. We see individual answers for individual situations. The story’s satisfying. The book’s well-written. And we’re left with big questions to think about, on the nature of who we are. In all these things, this tale echoes the classic works of its genre.