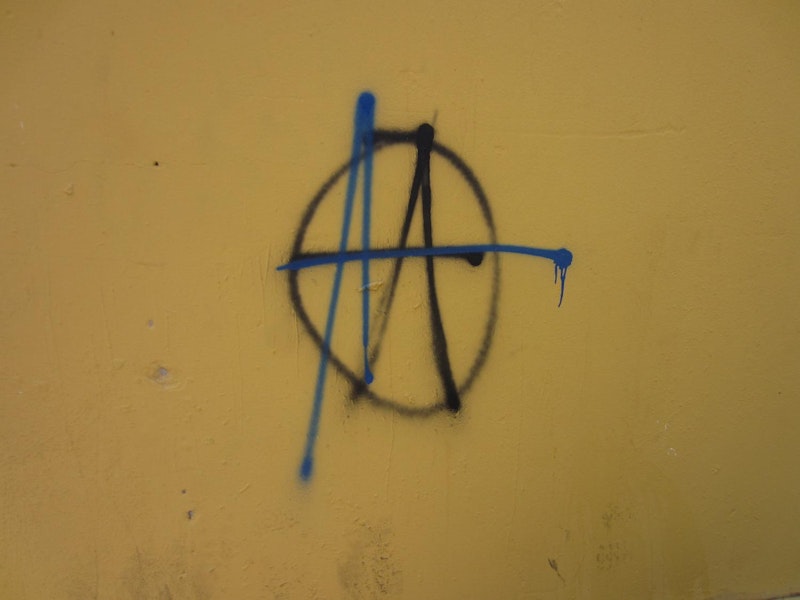 Irrationally frightened by markets, with their ever-increasing abundance of good things and unmoored range of individual freedoms, activists and intellectuals a century ago fled in roughly four directions: (1) a religious/traditionalist rejection of materialism, (2) a socialist/liberal attachment to the state, (3) a populist/fascist embrace of nationalism or race, (4) and a (non-capitalist) anarchist rejection of most of the conventions of bourgeois society, good or bad.

Basically, every time humans do philosophy, idiocy ensues, today as it was then. I don’t have a solution, but let’s focus for now on that last bit about the anarchists. If the anarchists would specialize solely in fighting government, I’d comfortably count myself one of them, but humans just can’t leave sane enough alone, so most anarchists concoct schemes for subverting other people’s property rights, or even if they leave that tripwire alone, are compelled to find some other way to be bizarre to the point of unreason.

I noticed one online anarchist, for example, claiming not only to be newly alienated from the anarcho-capitalist faction I prefer but torn between “anarcho-transhumanism” and “anarcho-primitivism.” That’s quite a conflict, given that transhumanists dream of altering themselves so drastically through cybernetics and biotech that they cease to be members of our species, possibly being refitted to dwell on other planets or in deep space, whereas the primitivists eschew all traces of modern civilization (when not writing critically about it on the Internet using their computers or traveling the country using the internal combustion engine to tell people about the virtues of living in the woods like animals).

For the coup de grace, the anarchist in question, who seems like a nice enough person, joked sympathetically about being a “zenarchist,” meaning roughly someone who thinks “anarchy” should have no definition, as though words were shackles (this is a bit like the view of so-called “post-anarchists” that all systems of thought should be continually deconstructed, though I suspect with less academic jargon).

My real worry is that when you get caught between anarcho-transhumanism and anarcho-primitivism, you don’t set the world free; you merely buy a ticket to Burning Man. And when you achieve a state of “zenarchy,” you probably just stop trying to make meaningful statements altogether. It might be a more relaxing way to live than trying to privatize everything or make anti-regulatory policy changes, I suppose. I just fear giving it one of these philosophical labels is a way of putting a nice front on what is really retirement into irrelevance.