American Cops Are Too Trigger Happy

A little patience could save lives and keep the peace. 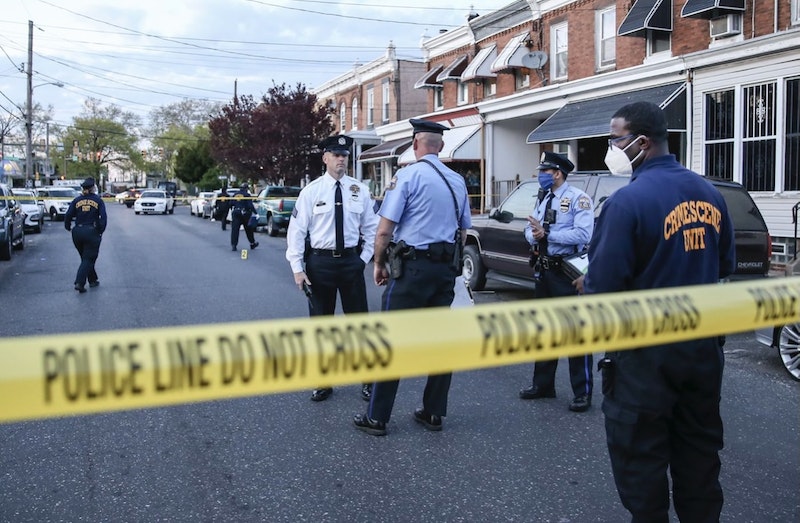 One week ago today, at around 3 p.m., when Philadelphia police responded to a report that a black man was waving a knife around erratically in the area of 61st and Locust Sts., it was possible to squint your eyes in the right direction and see the worst case scenario about to unfold. And, sure enough, it happened. Walter Wallace Jr., 27, was captured on video raising his arm as he approached two police officers. When Wallace refused their orders to drop his weapon, the cops fired 14 bullets at him, aiming at the middle of his body as they're trained to do. Police officers across this country are permitted to use "combat fire" in such situations, meaning that they empty their guns at a suspect, regardless of the risk they're facing. Within hours of Wallace's death, protesters had gathered outside a West Philadelphia police precinct.

It went downhill from there.

Four days later, Pennsylvania National Guard troops were summoned to Philadelphia to quell the resulting unrest, which included widespread vandalism and looting. Due to standard American police practices, the victim was destined to die as soon as the incident was reported. So many parts of this story were predictable: Wallace has a police record. It appears that he was suffering from mental health problems. Street protests were going to continue for days after the killing, and they’dturn violent. Tom Wolf, the Democratic governor of Pennsylvania, was asked for his comments after at least 30 Philadelphia police officers had been injured and numerous big-box stores had been looted. "The hope," he said, "is that it doesn't escalate to anything more than the peaceful protests." "Mostly peaceful protests" is the current progressive euphemism for violent protests that fall short of full-scale riots.

Trump, hoping to capitalize on the street violence in a key state just days before the election, called for "law and order," a jingoistic yet effective appeal to conservatives' emotions. But it's challenging to achieve law and order once the cat's out of the bag in a racially-charged situation when collective, pent-up anger's being released in a mob situation in the streets. How about a solution that keeps the cat inside the bag?

Such a solution keeps the Walter Wallaces of the nation alive, despite the fact that they put police officers' lives at risk. This makes it controversial among Republicans, but cops have no right, given their job duties, to kill anyone posing a threat to them. If they want a zero-risk job, plenty are available. A Trump "law and order" person might ask why we’d want to spare the life of someone trying to kill a police officer, and the answer is that when someone's out of their mind they don't know what they're doing. Instead of pumping them with lead, how about exploring other ways to subdue the mentally ill so they can then get help and perhaps safely return to society? This is what advanced societies do.

Philadelphia police commissioner Danielle Outlaw hinted at her underlying problem when she lamented at a news conference last Wednesday about her department lacking a mental health unit or a protocol to coordinate police calls with specialists. Were such an infrastructure in place, cops looking to use their 9-millimeter semi-automatics to end these standoffs would take a backseat to trained specialists in deescalation. The Philadelphia riots could have been prevented with more modern policing policies.

Cops often don't want to shoot the people they end up killing, but the vast majority of them have little or no training in how to recognize when someone is suffering from a mental health crisis. And even if they understand the individual's disturbed state of mind, they have little familiarity with tactics that could be used to avoid the use of their firearms. So when a knife-wielder continues to advance on them after repeated warnings, they eventually resort to the single tactic they know—they shoot him. The attacker doesn't even have to be that close. There's a decades-old policing rule that anyone with a knife within 21 feet of a police officer presents an immediate threat to life. That's absurd.

Some of the keys to saving the lives of mentally disturbed people waving weapons around, while also sparing police officers the burden they often feel after they've taken a life, may lie abroad. When Chuck Wexler, executive director of the Police Executive Research Forum (PERF), traveled to Scotland for a leadership training program in 2014, he attended a police academy graduation ceremony and was struck by the fact that none of the officers carried guns. Knowing that a knife attack is the same in Glasgow as it is in Chicago, he wondered how they handled such situations. When Wexler returned to the U.S., he'd studied the U.K.'s National Decision Model which focuses on communication, patience, and minimal force. He learned that even a subtle tactic like police officers removing their hats can make them seem more open and less confrontational. PERF now trains police officers across the U.S. to look for alternatives to deadly force in a threatening situation.

Some ask why police don't just shoot the gun out of a suspect's hand like they've seen in movies, but cops don't have the training to shoot like Wild Bill Hickok. Others wonder why they don't shoot them in the leg, but there's no guarantee that such a shot will stop the attacker from advancing and inflicting a serious injury on a police officer. The answer looks more like what the police in Camden, NJ, one of the poorest and most violent cities in the country, have been doing for a number of years. Camden cops are taught that they don’t have to rush in and resolve potentially deadly scenarios immediately. The best approach is often to slow down, take a step back, holster their weapon, and talk. They've found that it can be effective to surround a potentially violent person with a loose group of cops not pointing their guns at him. Instead, they focus on talking him down to the point where, if necessary, he can be tased and subdued.

The policy of police using combat fire must be reevaluated. To continue killing mentally ill people in our streets when alternatives exist would amount to a failure of imagination and courage. The situation is more urgent now that our cities have become tinderboxes that can ignite whenever a black man is killed by the police, regardless of the circumstances. "Law and order" doesn't always mean shoot first and ask questions later. We're not living in a Charles Bronson movie.