His goals are vague, and he appears to prize aesthetics over substance. 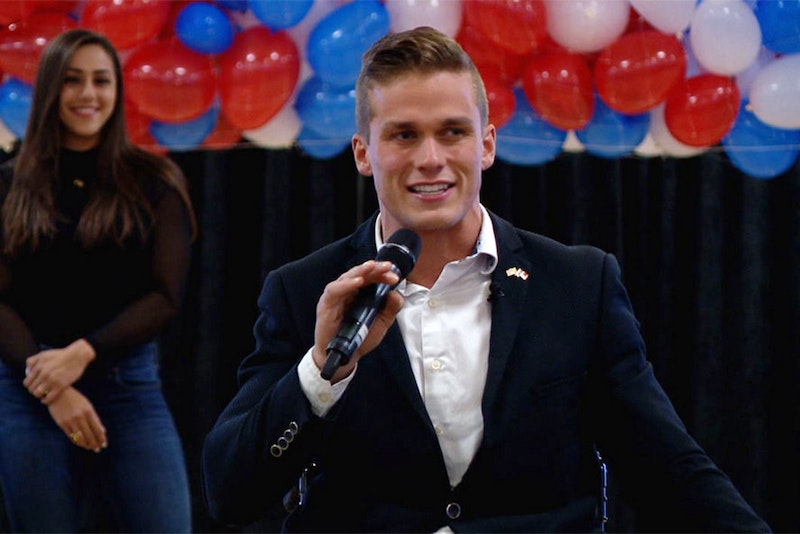 Is Madison Cawthorn the future of the Republican Party? The 25-year-old from western North Carolina may win his U.S. House race in a right-leaning district to become the youngest member of Congress. He also says he wants to take the party in a new direction. However, what he offered in a recent Daily Wire op-ed was underwhelming.

Surely, many in the GOP consider him a rising star despite many controversies, legitimate or otherwise. He spoke at this year’s Republican National Convention, indicating that the party likes what they see: young, muscular, good looking, and a member of a protected class. The latter is worth mentioning because the RNC typically thought of as an old white party, had Nikki Haley, an Indian woman, Dan Crenshaw, a veteran who lost an eye in combat, and Tim Scott, a black man, speak as well.

Outside of aesthetics, does Cawthorn bring anything new to the party? I don’t think so. In his piece, Cawthorn starts by saying that the GOP is old and that he hopes to attract some younger voters. He also makes a strong point about an issue with the party. “For the past two decades, however, the Republican Party has marginalized principled reformers in its own ranks and let itself be branded as the ‘party of no,’” he wrote. “On things such as health care, the environment, and other key issues, our leadership has aggressively attacked ideas from the Left but has failed to force consensus around the best ideas from the Right. It wasn’t always that way. And if we want to be a credible party in the future that can win national elections, that trend cannot continue.”

That’s correct. The top issue on voters’ minds in the 2018 midterm election was healthcare, and Republicans didn’t have a serious alternative to Obamacare, so they suffered losses and now risk losing an election to a Joe Biden-led Democratic Party that will raise premiums and deductibles in the private market by putting more people on Medicare-like plans with lousy reimbursement rates, leaving the average person to not only pay with taxes but with higher insurance costs too. The same goes for the environment. Biden says he doesn’t want a Green New Deal and spent much of the Democratic primary railing against the progressive wing of his party, but even his plan risks killing many good-paying jobs since he may or may not end fracking.

However, that’s the last time in the piece that Cawthorn mentions healthcare and he has previously said he supports a free-market healthcare system and that real free-market healthcare has never been tried. That’s a good idea to drive down the cost of basic expenses, especially since cash tends to be cheaper than insurance, but catastrophic medical problems are an example of market failure. If you have a heart attack, you can’t shop around for the best rate. And if your kid gets hurt playing in a high school football game and the school calls an ambulance, you’re screwed.

On the environment, Cawthorn compliments Teddy Roosevelt, Ronald Reagan, and George H.W. Bush. Again, he doesn’t set a goal, say which policies he supports that reduce emissions, or explain how you get such bills through when the GOP has climate skeptics in their coalition. Does he want to cut fossil fuel subsidies, kill the ethanol mandate, invest a certain amount of federal money into carbon capture, enact a revenue-neutral carbon tax, establish a Jones Act waiver to transport LNG domestically, restrict immigration/better enforce immigration law, enact permanent daylight savings time, or something else? No clue. His campaign website says he supports an “all of the above” approach where the government doesn’t decide. It’s great if right-of-center candidates care about the environment, but the minority of voters who pay attention might want to know what the plan looks like.

Cawthorn rattles on, mentioning cancel culture, Antifa, America defeating fascism and Nazism, living in a nation of immigrants, landing a man on the moon, Congress being ineffective, without going in much depth.

The piece doesn't address the forever wars in the Middle East, specifics of immigration and visa policies, the student loan debt problem, or the country's declining birth rate. I’m not a fan of his opponent, Moe Davis, but Davis deserves credit for saying something that few others in politics would: that Israel should not receive foreign military aid from the United States. Davis worded it well in late-2018 when he said, "Thanks to US taxpayers, the Israeli gov’t gets the equivalent of $436 per person and it provides them healthcare and abortions. After nearly 70 years of taking US handouts, how much longer before Israelis lift themselves up by their bootstraps and get off the US taxpayer’s teat?"

If Cawthorn was rebelling against the mainstream of his party, he could come up with some great ideas. However, it’s more likely that he’d be another establishment hack.