Heaven Was a Place on Earth

For Žižek, communism isn’t a solution, but a way of analyzing our current problems. 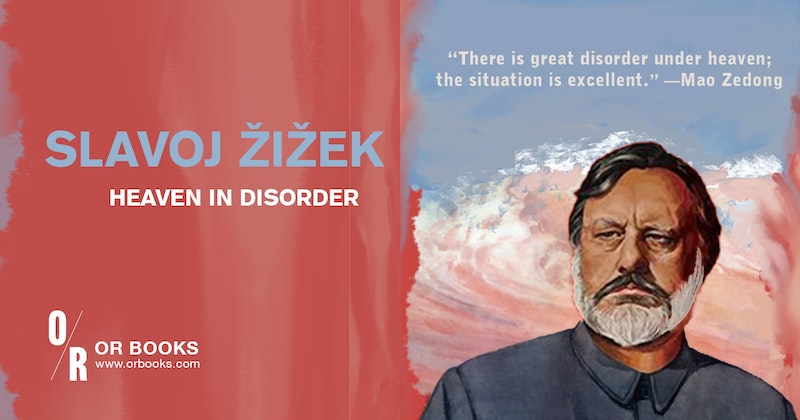 Slovenian philosopher and social theorist Slavoj Žižek’s books come in three levels of difficulty. If you’re not careful, you could end up in a labyrinth of one of his “pure” philosophy books, trying to understand his melding of Hegel with Lacan, like in Sex and the Failed Absolute. Better to read the mid-level books, from the publisher Verso, which made him “the most dangerous philosopher in the world.” Hegel and Lacan still make appearances, along with Marx, Freud, Kant etc., but his focus in these books is on politics and social issues, using philosophy and psychoanalysis to understand them, tempered with examples from popular culture, including books and movies. You don’t have to have seen Hitchcock’s movies to follow him, but it helps. Look for these books, such as In Defense of Lost Causes and Living In The End Times, in Verso’s “The Essential Žižek” series.

In the last two Covid years, Žižek has published three books with OR Books, which are the “easiest” and most accessible—a good “jumping in” point for the Žižek-curious, and light reading for those who’ve followed him for a while. The first two were titled Pandemic!: Covid-19 Shakes the World and Pandemic! 2: Chronicles of a Time Lost. The third, which came out at the end of 2021, is Heaven In Disorder, after a quote by Mao Zedong: “There is great disorder under heaven; the situation is excellent.” The idea being that times of unrest offer possibilities and opportunities for political change. Or:

...when the existing social order is disintegrating, the ensuing chaos offers revolutionary forces a great chance to act decisively and take political power. Today, there certainly is great disorder under heaven, with the Covid-19 pandemic, global warming, signs of a new Cold War, and the eruption of popular protests and social antagonisms worldwide naming but a few of the crises that best us. But does this chaos still make the situation excellent, or is the danger of self-destruction too high? The difference between the situation that Mao had in mind and our own situation can be best rendered by a tiny terminological distinction. Mao speaks about disorder under heaven, wherein “heaven,” or the big Other in whatever form—the inexorable logic of historical processes, the laws of social developments—still exists and discreetly regulates social chaos. Today, we should talk about heaven itself as being in disorder.

This is one of the denser sections of the book, and it’s from his intro. But it’s pure Žižek: the Lacanian “Other,” the Marxist-Leninist revolutionary language, not to mention Mao. Žižek is strong on analyzing situations—in this case, each essay in Heaven In Disorder focusing on one bit of disorder—and even cheering on the possibility of change. His solutions, though, can be unrealistic.

All three of these OR Books, unlike his Verso books, are in the format of single, stand-alone essays, with the length and intent of a newspaper or magazine opinion piece. There are no credits for previous publication, but they span the time period of fall of 2019 to fall of 2020, just after Biden’s win. And since they’re shorter, Žižek addresses the topics more directly, with no big Hegelian-Lacanian-Marxist analyses, though of course all three of those thinkers do appear—it wouldn’t be a Žižek book without them. (You can also watch two documentaries featuring Žižek: The Pervert’s Guide to Cinema and The Pervert’s Guide to Ideology.)

These shorter essays mean that, though arranged chronologically, you can “choose your own adventure”: if you want to read all his essays reacting to the response to Covid, you can. Or, if you want to read his essays about Julian Assange, you can do that. Heaven In Disorder offers a wider (some might say more scattered) spectrum of Žižekian thought than the Pandemic! books but, as a whole, it offers an overall view of his thinking, and politics.

Since Žižek is a critic of all neoliberal and neocon governments—he criticizes both Trump and Biden in Heaven In Disorder—I’m surprised that he continues to argue for a stringent, almost draconian, Covid response. This is still true, even more recently than the publication of the book: in his interview on the Red Scare Girls podcast, they challenged him on this, surprising and befuddling him, though didn’t seem to change his mind. Žižek is what’s called a “zero-Covidian,” he still thinks wiping out the Covid virus is possible. More surprisingly, he’s arguing for a strong government response, with mandatory vaccines and more lockdowns. His argument is that only a socialist government could really pull this off, one that wouldn’t be dependent on corporations and the capitalist free market. Still, both his belief that Covid can be wiped out, and that it will take a (very) strong government, makes me uneasy.

Žižek has a “blind spot” for independent news. He critiques, and quotes, news articles and opinion pieces on politics from such places as The New York Times and The Guardian, pointing out their lies and hypocrisies, yet seems at the same time to take their reporting on the Covid response as unassailable fact. For example, even the head of Biden’s Covid Response Team has said publicly that the virus is endemic, that it’s not ever going away. (Another example: he seems unaware how corrupt the DNC is and how they fixed the primaries, twice, against Bernie Sanders.)

There’s much to agree with, enjoy, and ponder in Heaven In Disorder: The continued torture of Assange is a travesty, and a danger to all press freedom everywhere; climate change is, or should be, a worldwide emergency to which our governments should be responding; Biden is just as bad as Trump, if not worse in some ways. All of which liberals/centrists/Democrats here in America may not want to think about or acknowledge. He does offer some solutions, especially in his final essay. “Why I Am Still A Communist.” Again, he’s arguing that a socialist/communist government would be best-suited to solve global problems like the virus and climate change, but when he says that “we” need to assert a socialist form of governing and make healthcare available to all, for example, none of his readers will disagree, but neither can we do anything about it: we have no control over what the oligarchs want to do with us. Žižek won’t go so far as to say overthrow the oligarchs—or he doesn’t here, but his “solutions” are really for those in power. His readers are not those in power.

The only other advice he offers is through his essay on the German industrial-metal group Rammstein, “We Have to Live Till We Die: What Can Rammstein Tell Us about Life in the Pandemic?” (I love the idea of Žižek, an academic who underwent Lacanian psychoanalysis, listening to Rammstein. It’s like if Susan Sontag listened to Metallica.) This is one of his later essays, and he’s coming around, maybe, to the idea that the virus isn’t going away.

Rammstein turns around the obvious wisdom, “no matter how long you live, at the end you will die,” replacing this with “till you die, you have to live.” What makes the Rammstein version not an empty tautology is the ethical dimension: before we die we are not just (obviously) alive, we have to live. For us humans, life is a decision, an active obligation...

Žižek is arguing for more of an existentialist approach to pandemic life, which is curious since he hardly mentions the French existentialists (Sartre, de Beauvoir, Camus) at all in any of his writing, and Heidegger just a bit. But it’s the “life sucks, try to have a good time” idea or, life has no meaning, we need to find our own meaning in that nothingness.

I don’t think anyone has a good answer or response to what’s going on. But, to go back to the title, there’s at least an opportunity for change. Žižek doesn’t know what that change might be. For Žižek, communism isn’t a solution, but a way of analyzing the problem(s). He’s modeling that here, a way to think, so when disorder happens, we can push for change.