A Plea For Baby Steps in Healthcare

Lawmakers need only look to the energy debate for examples of how to move a policy forward incrementally. 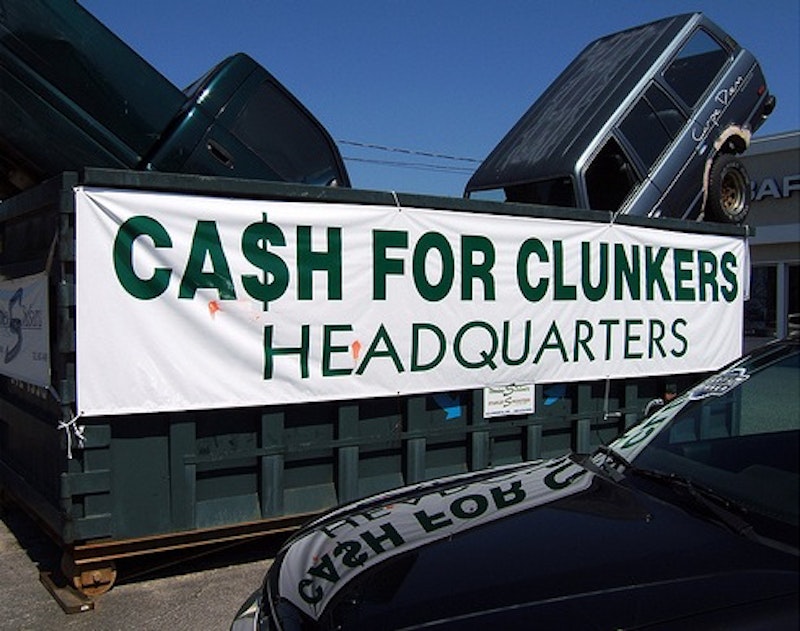 Photo by Tony the Misfit

If anything can be gleamed from the debate over health care reform it's that the message is lost, for both Democrats and Republicans. The networks, the politicians and the public at large, as argued by Russ Smith on this site, talk past each other, painting with broad pedantic brushes on the left and defending unabashed vitriol on the right. The unfortunate passing of Senator Ted Kennedy will jump-start a few souls in the morass of Capital Hill as Congress prepares to come back from recess more battle-weary than it was at the beginning, but with congressmen on both sides of the aisle spinning his death as either a call for a "time out" or a "time to act" one is left wondering.

Cutting down health-related expenses for individuals, families, businesses, and the system as a whole is invariably a crucial step in righting our national economic trajectory. That path will involve painstaking increments as well as bold legislation. But right now the struggle over the direction (or lack thereof) of health care in this country is losing the battle to palpably define the specific advantages of reform (or lack thereof). For a parallel example, let's look at energy reform, specifically the small-ball items.

The cash for clunkers* program is not unassailably right or wrong; it is not by any means perfect. It is easy to criticize it as a drop in the bucket, a giveaway to the auto industry and a public that is more than happy to take money from the government. It does own those criticisms to a degree—though a degree far lower than its critics imply. In fact, the program makes small gains in all three of its objectives: buyers swap higher-polluting cars for more efficient ones; the auto industry moves a chunk of units; consumers save money on fuel over the long haul. Nothing to write home about, maybe, but folks are swapping Ford Explorers, Ford F150s and Jeep Grand Cherokees for Toyota Priuses (Pria?), Ford Focuses and Honda Civics. Where it has failed is in the reimbursement of car dealerships. That issue needs to be taken care of yesterday.

It's the little things, sometimes. The Waxman-Markey bill-cap-and-trade-would knock off 876,000 barrels from our daily consumption by 2020, a grand total of 4.5% of total use. Again, small potatoes, and as the Wall Street Journal points out, the bill would do little to squeeze petrostates** of any business. But there the potatoes lie.

Yesterday The Baltimore Sun's front-page banner read, "Md. to cut $454 million." Two hundred and five state employees will be laid off, along with additional furloughs and the closing of certain units at health facilities. Below ran an article even simpler headline, "Money for efficient appliances." Maryland is slated to receive $3.5 million in stimulus funds—the smallest of drops, if you will—for a voucher program aimed at replacing aging consumer appliances with the government's own Energy Star models. The article reports that "last year's energy savings from Energy Star appliances could power 10 million homes, avoid greenhouse gas emissions from 12 million cars and save consumers $6 billion." Not bad for government work.

If you're unsure if our country's current energy consumption is unsustainable, in a bring-it-all-back-home article in Miller-McCune, Judith D. Schwartz writes,

One might not imagine oil and medicine would mix, but U.S. health care relies on cheap crude in multiple ways: from petroleum-derived pharmaceuticals (including such commonly prescribed drugs as aspirin, vitamin capsules, cortisone and many antibiotics, antihistamines, medicated skin creams and psychiatric medications), catheters and syringes to running and transporting high-tech machines and time-is-of-the-essence ambulance runs. This makes for great aseptic single-use equipment and complex, even heroic, surgeries, but it also leaves our medical system highly vulnerable to any disruptions to the oil supply - which experts say will undoubtedly happen, though no one knows exactly when.

The economic downturn lowered demand, and thus oil prices. But this will not last, Bednarz said. "Within a year or two, production will go down and that will be a whole new ball game," he added. Oil prices will rise, leading to more layoffs and more people without health coverage, which will exacerbate the debt crisis. And since health care itself is so dependent on oil, the cost of medical services will continue its upward trajectory.

The article admits that hospitals won't "go dark" if oil prices rise, but just as a few hundred thousand new refrigerators can cause a few unexpected ripples, so can a rise in oil prices.

The above increments of change won't put the US back a path to sustainable growth all on their own; bold legislation, honest legislators and a healthy free market are more efficient, as it were. But if nothing these small steps focus the county's attentions on the solutions directly in front of us: better cars and better freezers will save you money and take a few straws off the environment's back. Remember, during the presidential campaign, how thoroughly the Right abused President Obama for his remark that checking the pressure of one's tires would prove to be an energy saver? Heaven forefend if, as the Department of Energy states, drivers use 3.3% less gas with properly inflated tires.

Where are the parallel examples in the health care debate? Right now the Administration is in a decent knot over the direction of reform. President Obama needs to direct the debate into an area where health care reform is defended as a crucial step in the refortification of the American economy; it's passage is crucial if we're to emerge from this jobless recovery into a capacity to effect greater growth and prosperity in the years to come.

*Does hearing and reading the word "clunker" so many times render it meaningless to you, too? Email me at andrew@splicetoday.com and we'll figure out a classier term.

**Also, "petrostates" isn't cutting it, either.