A Political Primer for Barack Obama

The President can still salvage a decent health care bill, if he finally twists the arms of timid Democrats. 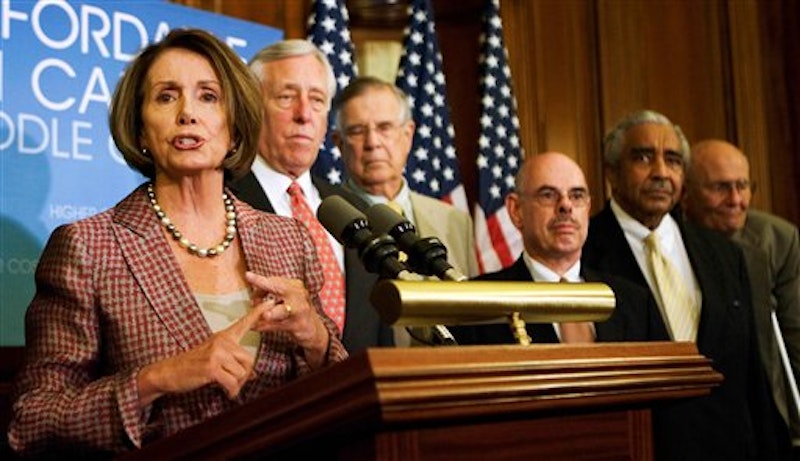 President Barack Obama is a politician who doesn't seem to like politics. This is not to say that he doesn't enjoy the oratory of the campaign trail or the politesse of town hall meetings. To the contrary. This is where he soars. But where Obama comes up short is when it's time to grab elbows and crack kneecaps, the fine art of persuasion that comes with being a hell-raiser and a deal-maker, the messy stuff of getting things done. Once he masters that, he'll be president.

Though he wears the chevrons of Columbia and Harvard, the politics of the presidency elude him. The nooks and crannies of Washington are not the salons of New York and Cambridge. Politics is about the game just as life is about the ride. It's time for a display of ballsmanship.

The current mess over health care reform is a case in point. It didn't have to be this way. Obama, ever the professor, likes to say that change isn't easy, that most change begins on the streets and not in the nation's capital. He's right, of course, but the votes for passage of health care are not in the wheat fields and Palookavilles of America. They're in the House and the Senate. His major mistake was allowing Congress to take the lead on the issue.

To be fair, Obama tried to avoid the secrecy and closed-door approach that helped defeat Bill and Hillary Clinton's attempt to reform health care. Obama took the opposite approach, complete transparency. He tossed the hot potato to Congress and took to the airwaves and town hall meetings for a public discussion of the issue. So far, no sale.

Gathering votes is triage—you know what votes you have, you know what votes you don't have, and you know what votes can be persuaded. It can be safely stated that health care reform will not get a single Republican vote in the House and only a scant two, maybe three, in the Senate. There are those Democrats who'll vote for health care and there are the so-called Blue Dog Democrats, the single greatest source of Obama's case of heartburn. Many of the Blue Dogs are first-term Democrats who won in conservative and normally Republican districts, in part because Obama helped to pull them along with him in the Democratic surge last year. A friendly reminder would help the health care cause.

And now, with Sen. Ted Kennedy (D-MA) and the 60th Democratic vote gone, health care reform has become a serious question mark. First, who'll replace Kennedy as the Senate's cross-party broker and guiding conscience, and second, will the memory of Kennedy help (probably in the short term) or hurt (perhaps in the long view) health care reform. In the 1960s, Lyndon Johnson was able to enact much of the New Frontier legislation by invoking the memory of the slain John F. Kennedy. Only Obama can provide the passion and the moral clarity that Kennedy did on health care reform. Obama may finally have to get down and dirty (if he's able to), less basketball and more hardball. Here are some tips.

Bipartisanship is baloney. When you've got power, use it (if you know how). Lawmakers love to feel important. And nothing conveys importance and bragging rights more than a sit-down with the president. This is where Obama summons hostile Democrats to the White House, one-on-one, for a heart-to-heart talk and a party call. When Republicans controlled Congress, they completely ignored and bypassed Democrats and proceeded like a wrecking crew to dismantle government regulations, leading to much of the financial distress that is sinking America today. Politics is as American as money. So there's also the squeeze-play of threatening to deny money and support from the House and Senate campaign committees as well as the Democratic National Committee.

Pork is power. The White House controls patronage, projects and billions upon billions in earmarks that make legislators' hearts go pitter-patter. Patronage is a system of rewards and punishments. For example: LBJ, the master of legislative persuasion, was able to win passage of Medicare in 1965 by increasing the nation's peanut import quotas. Johnson overcame the opposition of Southern legislators to Medicare because the higher import quotas were a financial bonanza to domestic peanut farmers in the South. On other occasions, Johnson's bellowing scared the bejeebers out of members of Congress.

Never ask the Congress to draft important legislation. Congress is essentially a committee of 535 members, which, by its very nature, is incapable rising to the task. If Obama had submitted his own detailed health care bill as a starting point, he wouldn't be in the pickle he's in with Congress as well as the nation. There would have been no room for ambiguities and misinterpretation.

For example: Three committees in the House worked on health care and, finally, produced a single bill. It contains the so-called "public option," which would create a government program to compete with private health insurers. In the Senate, however, there are two competing committees—Kennedy's Health, Education, Labor and Pensions Committee, which has adopted a bill containing the "public option," and the so-called "gang of six" from Sen. Max Baucus' (D-MT) Finance Committee, who can't agree on anything.

Another element of the legislative mess is Obama's garbled message-sending. During the campaign and early in the health care debate, Obama insisted that any health care legislation "must" include a public option. After being slammed by Congress, especially the Senate, he downgraded his degree of insistence to the nuance where he would "prefer" a public option. (On the day the softer word "prefer" was injected into the debate, health care stocks soared.) Decoding the audibles, and parsing every sentence, is an art form in Washington.

Obama's strategy, if there is one, is not evident to the naked eye. But one last hope might be to get a bill, any bill, out of the Senate and into a conference committee with the House and fuse the two into a single measure and live with the consequences. As it is, how many Americans would want to participate in a health care program that is 1200 pages long with 160 Republican amendments, most by their own admission of no consequence?

There are two ways to pass a bill - on its merits, or with the votes. A piece of legislation can be civically virtuous and downright Biblical in its moral injunction and intention, as many believe health care reform is. But without the required votes, it's destined for the shredder. Forget about virtue. It would behoove Obama to put aside the teleprompter and all of the soar-with-the-eagles prose and to begin corralling votes any way he can. After it passes, if it does, he can declaim the merits and claim credit.

Obama is guilty of an abuse of power: he has power and doesn't use it. Comparisons suck, to roughly paraphrase Shakespeare, but, in the spirit of the moment, the paraphrase is borrowed from John F. Kennedy's quote: "The only abuse of power is having power and not using it." The verdict is in on Obama. His inexperience is showing. Or is really just the nice guy from the Illinois legislature and the Harvard Law Review who wants to be liked by everyone?

Sometimes underexposure is preferable to overexposure. The surest way to ease health care reform through the Congress is to turn off the television cameras and the Internet for a week so lawmakers can address the issue of health care instead of the folks back home. And that means you, too, Mr. President.