My grandfathers fought Nazis in WWII. Where is their place in the Jewish story? 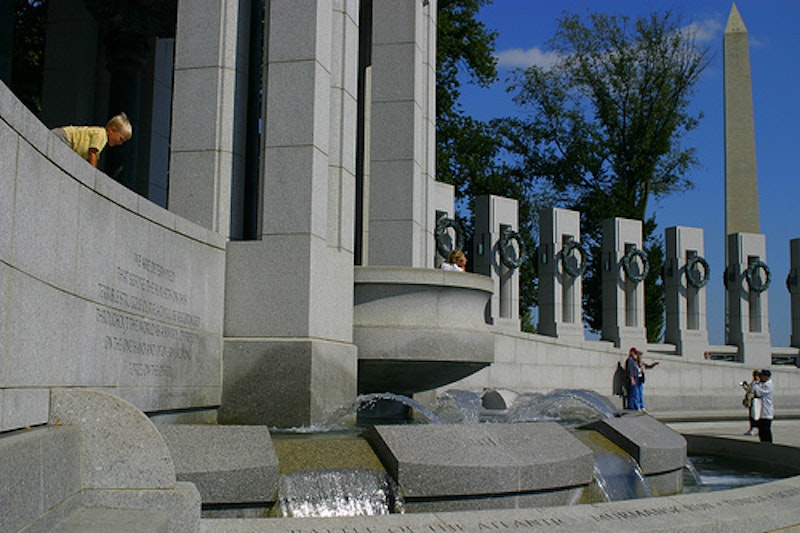 My grandfather killed Nazis, presumably. He was part of an artillery team during WWII, and though he probably couldn't have said for sure whether his gun's shells landed on the enemy, he was at the very least part of the bloody and eventually victorious American campaigns in North Africa and Italy. He received a purple heart. Although my other grandfather passed away before he could pass any war stories down, he, too, served in the successful American war effort. This is my WWII narrative.

With last week's release of Quentin Tarantino's Inglourious Basterds (reviewed here by SpliceToday's John Lingan), a new narrative has been arriving in theatres worldwide: one of pure Jewish revenge. The group of American soldiers, all Jewish-American aside from Brad Pitt's portrayal of commanding officer Aldo Raine, terrorize and brutalize Nazis across Europe. Concurrently, French Jew Shoshanna Dreyfus, played by Melanie Laurent, plots the murder of top Nazi brass. Spoiler alert: the film's climax involves a theatre full of Nazis burning to the ground with Laurent on the screen declaring, "This is the face of Jewish vengeance."

Needless to say, this is also a film of Jewish vengeance. It's not about American vengeance or Allied vengeance. It is about Jews killing Nazis, plain and simple. The Jewish-American community has largely embraced this, even if they have voiced reservations. Before this picture, the dominant Jewish narrative of WWII in cinema was the Holocaust film, an examination of the horrors and misery bestowed upon the Jewish people by the Nazis.

Indeed, growing up as a Jewish-American, you are confronted with a bizarre paradox. On the one hand, WWII is the historical nadir for one of your identities, the worst atrocities committed against the Jewish people in living memory—and possibly ever—were done so during this era. On the other, though, is the pinnacle of American history. It is the point when America became the singular world power, defeated the most truly evil force in modern history, and liberated and saved millions of lives.

Complicating the picture are the failures of the United States to reach out and save those being persecuted by the Nazis. The Nazis tried to export the Jews to another nation, and the United States refused to accept them. Much like the United States refused to bomb the concentration camps and rail lines that led to them, despite knowing what was going on in the camps.
Regardless of the historically complex interaction between both sides of my identity, the American sense of nostalgic accomplishment and power during the war dominates my sense of the time period, rather than the vulnerability and helplessness associated with the Holocaust. If anything, the Holocaust heightens this sentiment, a reminder that ending the horrors of the Nazi regime is most likely the greatest victory in which this nation will ever take part. Regardless of what was going through my grandfathers' minds, they fought for the lives and liberation of both sets of people, American and Jewish. For this, I am incomparably proud. I think about it everyday.

But this is not the lone narrative among Jewish-Americans, and I find that my thoughts do not necessarily place me in the majority. Reading some of the Jewish-American reaction, especially from those involved with making the film, I was reminded that there is still a sensitivity and fear-which Tarantino's movie plays off-that others perceive the Jews as weak. Journalists like Jeffrey Goldberg, for example, in his book Prisoners, have chronicled the way experiencing anti-Semitism growing up can affect the way one thinks about Jewish weakness or strength. Indeed, some of the most warped and violent settlers in Israel today are Americans who feel they are asserting themselves against a narrative of victimization.

The split of the Jewish people after WWII no doubt informs the way we interact with something like the Holocaust. Following the creation of Israel, there now exists three rather distinct groups of Jews: the Israelis, the remaining Diaspora, and the Americans. Israeli Jews have, since the war, crafted a new narrative, one of assertive strength and victory. This narrative is relatively absent from the other groups. Persecution of Jews is still a mainstay of life throughout the Diaspora. While anti-Semitism in America is comparably absent—I have encountered virtually none throughout my life and most people I know feel similarly—the Jewish-American story of security and comfortable success lacks forceful power. Indeed, Prisoners is about Goldberg's search for this Jewish power, which leads to his serving in the Israeli Defense Force.

For this narrative, a film like Tarantino's is an assertion of Jewish history by the Diaspora, a moment of strength for all Jews, taking their people's story into their own hands. When asked how he felt about the film, my girlfriend's Israeli father said it was okay, but "It's really for American Jews." He meant that it was for the Diaspora, people longing for a history of power and assertion. But for me, my American-ness (and my family's narrative) similarly leaves me without a need for compensatory retribution. My idea of strength and revenge is actually present in what I consider the best WWII film, Saving Private Ryan. In a scene just following the D-Day invasion, a soldier, played by Adam Goldberg, proudly holds up the Star of David around his neck to the passing Nazis taken as prisoners. It is a moment of mercy, it is a moment of realism, it is a moment of triumph, and it is a moment of convergence between the Jewish and the American.

The idea of victimization rings false to me, and the stories of escape or defense, like those in the film Defiance, rightfully alter the landscape of the Holocaust narrative. I hope that those stories, alongside the stories of bravery and valiance by Jews fighting for the Allies help undermine this image of weakness, and erase from the psyche of Jews today. We cannot ever forget what was perpetrated by the Nazis. But we cannot ignore the other sides of the Jewish story, either. It is a reminder that even in the worst of times, there is a wealth of resilience and valiance among the Jewish people.

I carry a picture of my grandfather in my wallet, taken in his army uniform in 1943. He is giving a cocked, knowing smile, as if he knows he's about to win the war all by himself. That's my image of WWII.