A Nation of Communities, Not a Community of Nations

We must act locally, not globally, so our fellow citizens may rethink the price of globalism. 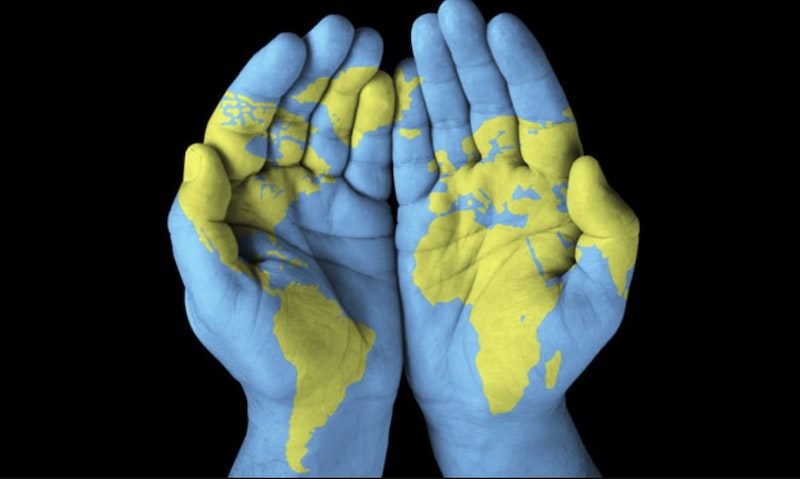 The adhesive sticks but the admonition doesn’t stay. The words grace a cause, free of the promise of deliverance by grace. The words replace acts with advertising, rewarding pleasant thoughts in lieu of having people think about the consequences of their actions, in lieu of having people do anything but repeat the words of a cause weathered by time and weakened by the weather itself, turning bold colors into pale pastels, until the words of the third generation fail to inspire all six living generations. And yet the words endure: Think locally, act globally.

Were we to do just that, were we to think about the primacy of local merchants, were we to put our communities first, the effect on commerce would be good for small business owners. Goodness would offset the cost of certain goods, displacing dependency with opportunity.

The effect would serve to detoxify a place and a people, ending fear of dependency and fear because of dependency on drugs. The effect would be a return to normality, or something better than the new normal of forsakenness and foreclosure, of towns haunted by the living and outnumbered by the dead, where tombstones mark the fields and empty factories line the streets.

The effect would be the reconstruction of towns destroyed by the pen instead of the sword, of towns consigned to die, of towns condemned by the signature of an executive, according to the orders of an executive, in the form of executive orders. Thus do men follow orders, not because they lack the will to resist, but because they resist the will to disobey orders. Thus do men sever the bonds of affection with bonds payable upon receipt: with scrip as severance, bearing the serial number, seal, signature, and date of a final paycheck.

To reverse this situation we must act locally, not globally, so our fellow citizens may rethink the price of globalism. The alternative is to have the world’s richest man extend the Amazon, allowing him to flood our portion of the globe. The alternative is to watch Jeff Bezos reach the heavens, while here on Earth we continue to do his work.

To do his work is to drive people out of work, while his drivers—a blue crew that wastes not, unless a bag or bottle is available—rule the road. That these drivers must grin and bear it, smiling from the strain of doing two things at once, of ignoring the call of nature and of answering the call to look natural, as if anyone can smile from ear to ear the way the arrow in a logo stretches from “A” to “Z,” is cruel but not unusual. What is unusual is the cruelty of irony.

If we are to avoid a similar fate, we must choose renewal over rootlessness. We cannot move on, because we cannot forget. We cannot be as corporations, alive but unaware, because we are not a legal fiction. We are a fact of life.

We are a people with a Republic to keep.