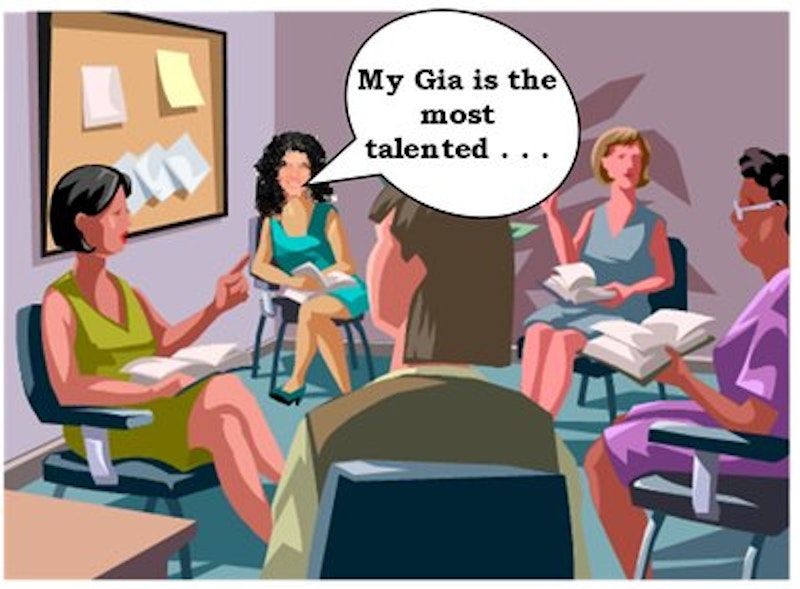 “Connor is the tallest boy in Kindergarten!”

“Taylor was reading in Pre-K.”

“Montana is so picky, she will only wear designer dresses!”

Sit yourself down in any community park in the nation and you’ll hear them, like cicadas; increasing buzzing that gets louder and louder until it reaches a fever pitch. Then a moment of silence, while an organic apple juice box is fetched or small hands are doused in antibacterial lotion. And then: the buzzing again.

No matter what you say, a “Topper Mom” has something better. If you served 12 people for Thanksgiving, she served 20. If you have a kid in two activities, she has three kids in an eye-rolling total of 12 activities. Your kid scored a goal in soccer? Her kid scored four in last week’s game alone! You name it. She does it better. (I’m using “she” but I do not mean to be gender biased— there are obviously just as many dads out there guilty of being insufferable toppers.)

What invisible contest is it that she is trying so hard to win? The “my kid is the smartest” contest or the “my kid has the best self esteem?” Actually, it’s more a battle of who’s the best mom… like some sort of unspoken playground society Academy Awards. “And the Oscar for Best Service of Raw Organic Foods goes to…” or “The Best Supporting Motherhood Role Model is…” And there are definitely women vying for the lifetime achievement award in “I didn’t give up my career to stay home with these kids FOR NOTHING. If I can’t be out there competing in the workforce while raising children, then I CAN compete through them on the sidelines of the athletic fields!”

Because nobody likes an overly protective, overly hovering helicopter parent living vicariously through the achievements of his or her kids. It’s at the same time sad and annoying.

As an 18-year veteran mother of four who embraces mediocrity like the comfortable down feather parenting pillow it is, my response over the years to these mommier-than-thou types has grown less irritated, more blasé. Hey, if selling the most cookie dough kits at the fundraiser makes you feel better about yourself, bitch, go for it!

Slacker moms unite! I can spot another slacker mom across a crowded soccer field half a county playing field away. Our kids are the ones who are late for practice and wearing unmatched socks, forget snack on snack day, have un-brushed hair, eat too much sugar, have too much unmonitored screen time, eat non-whole grains, you name it.

In fact, when I meet a Topper Mom, I do a sort of reverse competition, passive aggressive thing that often gets rewarded with a lovely deer-in-the-headlights stare upon discovery that I am not entered in their “Motherhood! Winning!” sweepstakes.

Topper Mom: “Logan went poop on the potty today—and he isn’t even two yet!”

Me: “That reminds me! I need to buy a potty for Bobby—he’s almost three!”

Topper Mom: “Kyleigh got the award in class today for best citizen!”

Me: “I wish they had an award for ‘most days late for school’—we would win because we oversleep almost every morning!”

Topper Mom: “Jayden made his own tofu for lunch today!”

Me: “There was a bomb ass sale on Lunchables at the Food Lion this week. Three for $5, baby!”

Topper Mom: "I think Christiana is in the running for valedictorian!"

Me: "I hope Molly's out of jail in time for graduation!"

Sometimes, I feel sorry for the Topper Moms (once referred to by blogger Lindsay Ferrier as "Brag Hags"). It’s pathetic how they torture themselves, not to mention define themselves by their poor kids. The kids are the ones who suffer—this endless, victory-less competition will undoubtedly haunt them in later years. And none of the moms will be bragging about whose kid has the highest therapy bills as an adult someday.

In the meantime, I’m happy to be the mom who actually lets her kids eat the bank lollipops.