You can't produce good, educated people by treating them like widgets. 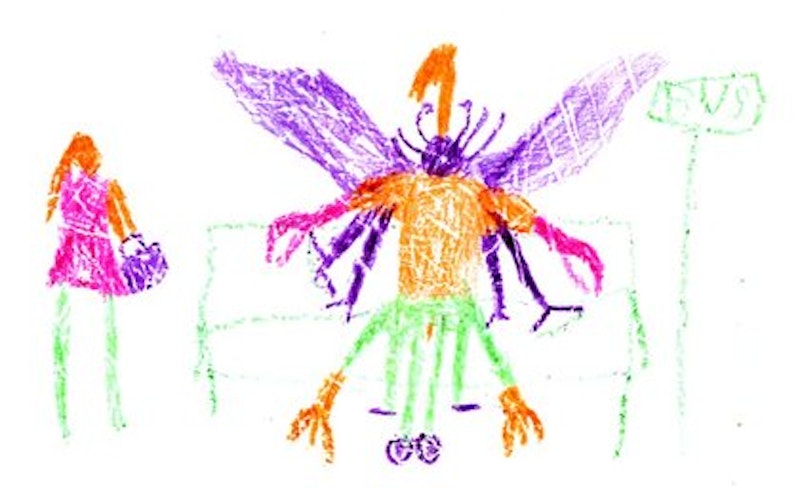 As I've mentioned before on Splice, my eight-year-old son currently goes to a Waldorf private school. Waldorf is an educational program/philosophy conceived of by German New Age hippie Rudolf Steiner. A friend of mine aptly summed up Steiner's outlook with the phrase "gnomes good, television bad." Steiner and his acolytes are anti-media, pro-fairy, and pro-happy-children-frolicking. The school my son attends (Urban Prairie Waldorf) is happily not too crazed about the anti-media bit, but are very much for the frolicking (with or without gnomes.)

My son has two recess periods a day, lots of art, music and "movement" (which is what hippies call "gym") and put on a lovely class play at the end of the year which involved memorizing great gobs of text and wearing bunny ears. There are no tests or grades and hardly any homework—none at all in the early grades. The school is even laid back about reading; students aren't pushed, and some may not be fully up to speed until third grade, or occasionally even later. The assumption is that kids will read eventually, so why make everyone miserable about it?

The Center for American Progress, presumably, would be horrified. They recently released a report that sternly admonishes parents everywhere that school is too easy. The studies, based on surveys of students, revealed that:

"7 percent of fourth-graders say that their math work is too easy. More than a third of high-school seniors report that they hardly ever write about what they read in class. In a competitive global economy where the mastery of science is increasingly crucial, 72 percent of eighth-grade science students say they aren’t being taught engineering and technology, according to our analysis of a federal database."

I don't doubt that a ton of kids are bored in school. Nor am I necessarily surprised to hear that most schools are pretty lousy. And while Waldorf tends not to focus on technology (no computers in the classroom, folks), I certainly don't have any problem with better science education.

However, I am tripped up a little by that appeal to the "competitive global economy."  That is not, one assumes, a concern raised by the students themselves in their surveys. Kids worry about jobs, and they may write badly, but they tend to write badly in a way that doesn't involve defaulting to policy buzzwords.

So, of course, the people concerned about the "competitive global economy" are not the students, but the wonks… which is, broadly, why wonks should not be trusted. Personally, I don't want my child educated, or even really interacting, with someone who sees him primarily in terms of how well he can be molded to fit into the competitive global economy. He's not a cog in their capitalist machine. He's a small child, who will certainly need to get a job someday, but who also, as it happens, is a living human being right now, even as I type. And I insist that what he is now matters as much as what he will be 20 years from now.

Every parent wants his or her child to succeed. Allison Benedikt expresses that desire vividly in her response to the CAP study.

…the takeaway should alter our caricature of stressed-out, over-tested, under-pressure kids—or at least alter the way we think about that stress. As an alum of a terrible public school, where the only book I was required to read in FOUR YEARS of high school was The Good Earth and none of us had ever even heard of “AP” classes, I can only hope my kids will think school is very, very hard. The upper middle class fourth-graders whose backpacks are so heavy with assigned reading material that they get grooves in their shoulders from carrying them? Those kids are the lucky ones.

I understand where she's coming from. But I think we really need to fight against the impulse to assume that giving kids options is synonymous with giving them burdens. Certainly, kids who are able to go to school with resources—whether public or private—are very lucky. But it's the resources and the options that make them lucky, not some masochistic benefit derived from struggling home under too many schoolbooks. As I mentioned above, Waldorf schools don't assign any homework in the first few years, so my son doesn't come home with any books at all. Am I supposed to think my son is unlucky? Or is it possible that measuring one's education by aggregate mass is kind of ridiculous? Surely, kids with no books is not an ideal education model, but must we then decide that the only good education is one in which kids are crushed under books? Wouldn't it be worthwhile to look for some other options?

The issue for kids, as for adults, should not be "how hard" or "how easy." Like most people, kids like to learn new things, gain new skills, and master new talents. Some things come easy (my son has had no problem with reading). Some things don't (we're still working on the sportsmanship.) But whether the easiness or the hardness is worthwhile has to be based on some sort of context that gives the task meaning. Or, to put it another way, any learning, hard or difficult, which treats children as grist for the churning of global capital is going to be an abomination. You can't produce good, educated people by treating them like widgets.

The Waldorf curriculum is quite ambitious—my son is learning two languages, knitting, and how to play an instrument, as well as how to treat his peers and teachers with kindness, respect, and love. Some of that, like knitting, probably won't help him in the work world. Some of it, like treating people with respect, might be antithetical to maximizing his future earnings. But the point isn't the future earnings, but rather for him to be a happy, thoughtful, creative and moral person now, because being a happy, thoughtful, creative and moral person is worthwhile. The Center for American Progress can call for higher standards, more rigorous learning opportunities, and more student surveys until they're blue in the face. But until I see some indication that the Center actually gives a shit about children as people, rather than as abstract populations to test and evaluate, I'll stick with the gnomes.

The illustration for this article is a picture of an alien who thinks he's invisible but actually isn't standing at the bus stop. It was drawn by my son, in a style he learned at Waldorf.