What did Shakespeare do to deserve a mess like this? 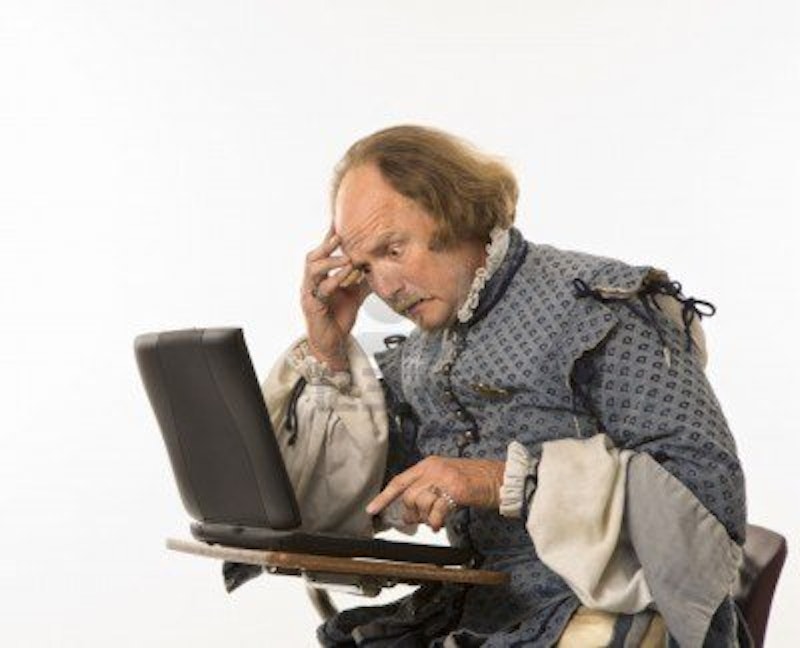 In this corner we have suave David Brooks, columnist for The New York Times. In the other we have fierce Charles Pierce, generator of blog posts at Esquire. Brooks, poised as a maitre d’, proffers a playful conceit and then rolls out a dapper series of sentences to hang an argument from said conceit. He does so without noticing that conceit and argument contradict each other. Pierce responds to the column with a post in which he brays like a jackass and drags his elbows across the keyboard. We see conservative pundit and liberal blogger at work in ways typical of their two types. It’s instructive, so instructive that I wish they would shut up.

First, Brooks. You remember Shakespeare, of course. Among other things he wrote several plays that are based, very loosely, on the reigns of England’s Henry IV and Henry V. Shakespeare’s Henry V is first seen as young Prince Hal, who worries his father by wasting his time on taverns, girls and fights. Then Henry IV is threatened by civil war. Hal throws aside his old pursuits, beats back the rebellion and succeeds his father to the throne. As Henry V he becomes England’s greatest warrior king and conquers most of France.

Brooks begins his column with this what-if: What if Hal had to make it through today’s education system? He’s an adventurous, high-spirited kid who likes to come out on top and who thinks with his body more than his mind. School wouldn’t know what to do with him. Or, actually, it would. He’d be doped on Ritalin and sent to sit in the corner until he became “nurturing, collaborative, disciplined, neat, studious, industrious and ambitious,” the qualities that, according to Brooks, the schools all want to drum into kids nowadays. Instead Hal would decide life was a prison and he had to break out. He would waste long years rebelling against industry, neatness, ambition, etc. In other words he’d be a screw-up. In high school “he’d devote his mental energies to violent video games and aggressive music.” In college “he’d exile himself into a lewd and unsupervised laddie subculture” and… wait a second.

That’s the stuff Prince Hal was doing. Not Hal the present-day school inmate, but Shakespeare’s Prince Hal. He spent his time in a lewd and unsupervised laddie subculture. He got drunk, got laid and farted away the days with dumb slobs who made him laugh. The argument Brooks is making may or may not be on target regarding the schools; I went to them so long ago, and paid so little attention, that I couldn’t say. He does offer some evidence, which is good, and if you broke away the opening conceit his argument might possibly stand up. But he really should notice that this conceit, this opening flourish, contradicts everything that comes after it.

Brooks is a good writer if you think of writing simply as the selection and arrangement of words. Let’s go back to the “laddie subculture” sentence. “Exile” is an example of that rare species, the right verb. The kid in question is deliberately sticking himself away from what he really cares about: purpose, achievement, a life that matters. “Exile” gets all that across with five letters. On the other hand, Brooks is not nearly as strong when it comes to thinking, and here his word knack adds to the problem. He’s so good at joining sound to sound that he doesn’t notice the gaps between the ideas.

Look at the trick he played on himself with “lewd and unsupervised laddie subculture.” College kids aren’t supposed to be supervised, not beyond check-ins with the occasional professor about a term paper. They’re adults now, and at college they’re supposed to learn how to live that way. So what is “unsupervised” doing here? Just this: It’s sounding very nice next to “lewd,” and the two of them are creating an even prettier blend with “laddie.” And that’s all. The word doesn’t make sense in this spot, but it sounds good. And the Hal-as-school-kid peg doesn’t make sense, but it sounds good too.

Now we have Pierce [http://www.esquire.com/blogs/politics/david-brroks-honor-code-column-10388414], who is just dreadful. For one thing, he makes a lot of noise about how silly it is to use your imagination. It doesn’t matter to him that the Brooks modern-day Hal maneuver doesn’t jibe with Brooks’ argument. What Pierce fires at is the idea that anybody would pose such a what-if in connection with any argument or topic. Here he goes: “Holy Ram Dass, Batman, they’ve got some fine drugs out there in Aspen, don’t they?” Aspen because Brooks is attending a big-deal elite conference that’s held there. Pierce expands on the idea’s folly: “Answer when I call your name: Paxton, Wanda, Peters, Gomer, Plantagenet, Harry...” Why, Hal in a modern-day school would have the teacher’s head cut off, or he’d invade France. Ha! Then Pierce puts hands on hips: “Look, I like you people. I really do. But do I have to go on with this? Either Brooks is stoned to the gills, or the Times gave every editor in its payroll a free trip to Neptune.” Because poor Brooks, said in effect, “Let’s imagine.” Up top I mentioned hee-hawing. The passage here is an example: noise after noise after noise about that silly doof Brooks, and nothing to show for it. But Pierce is happy. He’s slapping his hands on the desk and crowing at the ceiling.

The post is 2000 words long. That’s not counting the quotes from the Brooks column. Two thousand words. In it he manages to make just a few points. Here’s one: “Can’t you be both disciplined and rebellious? Ambitious and rebellious?” Sure, but it’s a lot less likely if discipline and ambition are two of the values fostered by the school system against which you’re rebelling. Here’s another: “that list of things that the education system has ‘become’ is exactly the formula the parochial schools have used since shortly after Pope Leo XIII kicked, and I am forever hearing education ‘reformers,’ most of whom did not live through it, as I did, cite it as an ideal solution.”

But here’s the list: “nurturing, collaborative, disciplined, neat, studious, industrious and ambitious.” Discipline, neatness, studiousness and industry—yes, the parochial schools drill those in. Ambition? Not as much. Being nurturing and collaborative? Oh, come on. And those two qualities are the ones that would really screw up the modern-day Hal. Of course, somebody might ask Brooks what kind of school wouldn’t try to encourage focus and the ability to work, especially that form of work known as studying. But Pierce is too busy flapping his arms.

He spots an opening when Brooks mentions boot camp. Brooks: “Schools have to engage people as they are. That requires leaders who insist on more cultural diversity in school: not just teachers who celebrate cooperation, but other teachers who celebrate competition… not just programs that work like friendship circles, but programs that work like boot camp.” Oh ho! Pierce: “Boot camps do not ‘engage people as they are.’… I've never been any closer to Parris Island than Brooks has been, but, Jesus Mary, even I know that dedication to ‘cultural diversity’ never has been high on the To-Do list of drill instructors.” Straw man. Brooks isn’t saying the teachers would be culturally sensitive (or insensitive). He’s saying the existence of these programs, alongside the allegedly touchy-feely ones, would be the result of a greater diversity of approaches by educators (“not just teachers who… but other teachers who…,” etc.). He’s saying this diversity is needed because some kids, by temperament, would actually prefer something like the break-’em-down-build-’em-up approach taken by the military. Are there such people? I wouldn’t be surprised, given that we have a volunteer army.

Pierce and Brooks agree that boys are now scoring lower than girls and that this is something to worry about. Pierce has a bold explanation as to root causes. “If schools are failing boys… it’s not because schools are curbing their natural aggressiveness,” he says. “It’s probably because we’ve got teachers making $45-grand a year trying to make do with outdated textbooks while ignoring all the heckling from the peanut gallery,” etc. Oh dear. Pierce, we’re talking about why girls and boys, sitting in the same classrooms and using the same textbooks, wind up with very different test scores. The girls, Pierce. The girls are doing better than the boys. The boys are doing worse than the girls. Same classrooms, same textbooks and… is anyone really this stupid?