Best friends for life... or not. 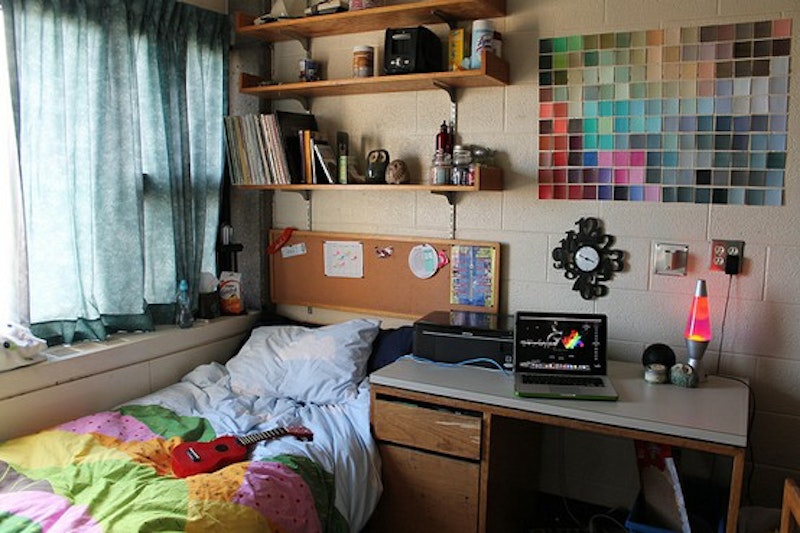 There are few things scarier than being 18 and moving into a tiny room and sharing a bunk bed with some bro from Oregon you’ve never met before. You’ll hate that he has smelly feet and yellowed toenails. He’ll hate that you leave beer cans next to the side of the bed and belch while you’re eating. You’ll memorize his class schedule so you know exactly how much time you have to rub one out before he comes back, though there will be that one time when he returns early and catches you red-handed. He’ll hate that you bring boys over all the time while he’s playing video games and you kick him out of the room, meaning he has to pause World of Warcraft. Later on you’ll have that three a.m. conversation about what it’s like to be gay and you’ll explain top, bottom, and versatile to him. Eventually you’ll develop a secret nookie code, such as placing a yellow sock on the door handle, which will say to the other roommate, “Do Not Enter.”

These are the pleasures and anxieties of being a freshman in college and discovering what it means to become an adult. These were also some of the most exciting moments of my late teens, and though I’m not close to my freshman roommates anymore—I think we’re Facebook friends—that period of bonding was formative for all parties.

Nate and Jon—I remember my first college roommates like it was yesterday. Being a sheltered New York City boy, I’d never encountered anybody from Ohio before, and both of my freshman roommates were from there. So here we were, three dudes in a cramped triple. I was the gay one, of course, and these were some guys who had perhaps never shared close quarters with a black guy in a catsuit before. They were not ready! Similarly, I had never been close with people who were so into sports—it’s just not my thing. But eventually, you learn to appreciate each other’s differences.

I came out to my roommates not by telling them I was gay but by getting to the room and deciding it was completely unfabulous. “Oh no, this will simply not do,” I remember saying. So I ordered a makeover. I took these pieces of construction paper and plastered them all over the place just to make the room a little bit brighter. They were cool with that, and learned to live with my eccentricities.

My freshman year roommates introduced me to Napster. They played soccer and lacrosse with me. I sucked at the latter, but was apparently great at kicking balls and keeping them out of the goal (soccer). My roommates invited me with them to take random drives around campus and to get late night snacks from the student center. We were like totally brothers, and we were especially close at the beginning of the school year. I eventually did come out to them and they were cool with it, and we did have that three a.m. conversation about gay sex.

“I mean, how do you have sex with a guy?” Nate asked. His question came from a place of genuine curiosity, not disgust or homophobia. So, as a professional gay I explained everything to him and he was like, “huh!” So then he told me all about girls, and it was great. The thing about your first college roommate is that it will likely be the first and last time in your life that you live with someone who has a completely different worldview and experience from you.

Popular lore has it that your first college roommate will be your best friend for life. I can’t say that’s necessarily true, but I was quite fond of Nate and Jon and frequently wonder how they’re doing. But as it goes in college, everybody is your best friend at first, like your default friend, because nobody knows anybody and people are desperate to make human connections. So you go to all the orientation events together. You take meals in the dining halls together. You go to campus events together. But while you’re doing all of this, you’re actually meeting new people and figuring out your vibe and whom you jive with. Naturally, as the year went on, Nate, Jon and I grew apart, just because we were figuring out our niche and didn’t need to be so buddy-buddy anymore.

I think there’s nothing better than move-in day, that first moment when you get to meet your roommate and default friend for the first time. This is the chance you get to expand your horizons, and learn something about someone whose perspective isn’t the same as yours. That first year of college can pull you out of your comfort zone, and if more people were forced to live with somebody different than them for a year, maybe there wouldn't be so many bigots.