That One Time I Was on a Quiz Show

And it happened by accident. 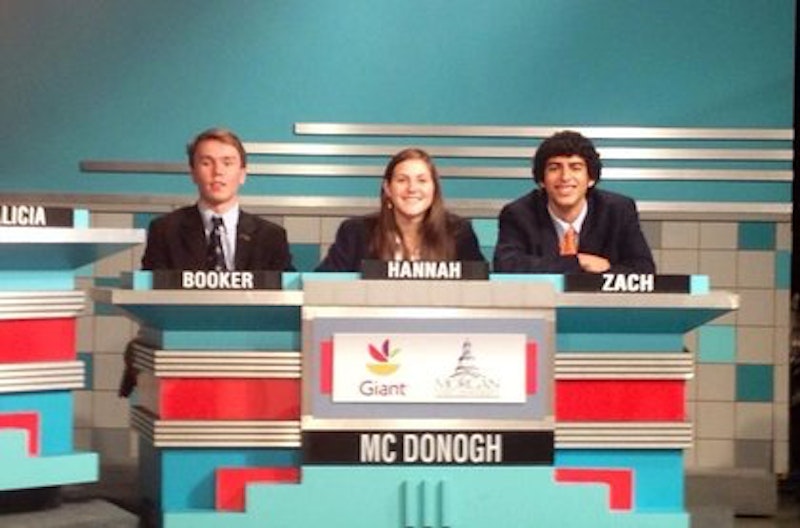 I hit the buzzer and yell louder than I ought to. “Harry Truman!”

“That is correct,” the old man says. “Seven in a row for McDonogh. You have triggered the bonus question!”

I am the David Ortiz of quiz shows: I come through in the clutch. An invisible IV from the sky feeds knowledge directly into my brain. I am a trivia factory. Nothing escapes unanswered. I am ready for fame. You may bow.

Zach plugs in the n64. He rifles through a cardboard box full of cartridges. “We need to join a club,” he says. “It’ll look good on our college apps.”

“The totally dope club,” I say.

“Hmm…” He continues to sort through the box. “I’m not sure Tufts would be impressed by that.”

“Sure they would. Our meetings would focus on Dragon Ball Z and Pavement and those donuts Mr. Grega sells every Tuesday. Those are the pillars of academia right there.”

Zach’s phone buzzes. He takes it out of his pocket and reads an email. “Look at this. It was sent to the whole school.” I don’t read the email so much as look at the words. It’s Academic, quiz show, TV, need members, respond ASAP. “Who’s Hannah Fishman?” I ask.

“Wouldn’t it be funny if we did this?” I take Zach’s phone and type out a reply: “Want to be part of your club. Love, Booker and Zach.” I show it to Zach and we both laugh harder than we should. I try to delete the draft but accidentally send it instead. I think nothing of it and hand the phone back to Zach. He picks up a cartridge. “Wanna play Mario Kart?”  “Duh.”

The bell rings and Monday classes are over. Zach and I barely walk 20 feet before hearing our names called out in a high-pitched squeal. “Booker! Zach!” Some girl waves at us. “We’re in this room!”

“Oh, God,” I say. “That must be Hannah Fishman.” Hannah Fishman talks quickly. Her sentences bleed together and it’s easy to lose track of what she’s saying. I nod every 15 seconds or so to show her that I’m following along. I’m not.

Before I can interrupt her and say we’re no longer interested, she says: “Oh, and you guys are okay with competing on TV in two weeks, right?” I look at Zach and shrug. “Sure.”

“This was a stupid idea,” Zach says. We walk onto the stage and are told to wave for the camera. The set looks like a 1980s-style diner—not because the show is going for a retro look, rather, they haven’t remodeled since the Reagan era. Everything happens so quickly I hardly notice it. The host, a man in his mid-70s, walks to the podium. “Happy New Year, everyone!” It’s November, but the episode will air in January. “Welcome to It’s Academic! Let’s meet our contestants.”

We are competing against two other schools and each of their three students introduces him or herself concisely and effectively. It becomes my turn too quickly and I don’t know what to say. “Hi, my name is Booker and I work at a smoothie bar.” The old man starts asking questions right away. No buildup, no warning. I answer a couple and then I answer them all. Or at least it seems that way. I fall into a groove.

The Truman answer triggers the bonus question and when I answer that correctly, too, balloons fall from the ceiling. Or at least they are supposed to. A woman with a clipboard whispers: “We add the balloons in post.”

“And now a message from our sponsor, Giant food,” the old man says. I turn to my teammates. I haven’t kept track of the score. “So how much are we winning by?”

“What are you talking about?” Hannah Fishman says. “Gilman is destroying us.”

“Oh.” I look around at the worn-down set, at the 15-person audience. “I guess I got a little excited.”