History Has its Eyes on You

News of Johns Hopkins once owning slaves is no surprise, nor worthy of changing the name of the university he founded. 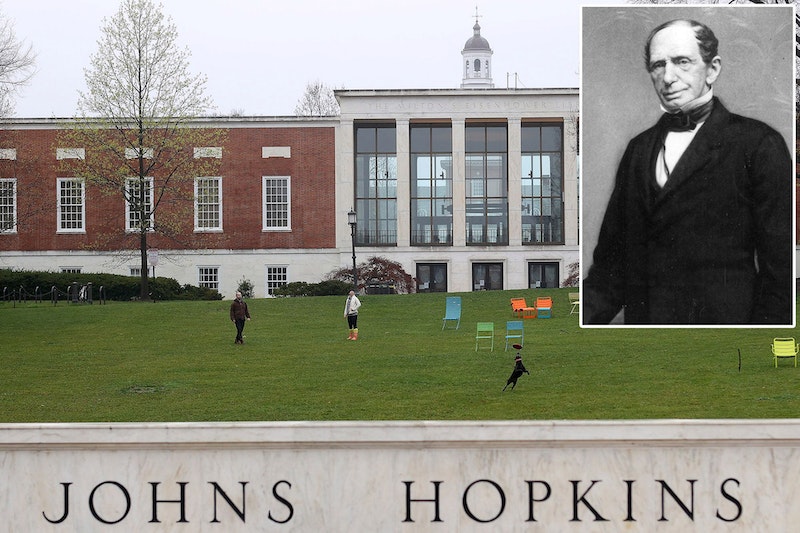 Just days before I received my acceptance to Johns Hopkins University, it was revealed that its founder and namesake, previously thought to be an abolitionist, owned at least four slaves in the decades before the Civil War. This wasn’t a surprise. A wealthy philanthropist in the 19th century—of course he did. Disappointing, but not groundbreaking. But to others, it was a shock, and a reason to immediately change the name of the institution itself, founded in 1876. By this rhetoric, should we change the name of our nation’s capital too?

This discovery brought to mind the recent controversy of the musical Hamilton. When it was added to the Disney+ platform in July 2020, a conversation was sparked regarding director Lin Manuel Miranda’s acknowledgement of slavery in the plot. “Glorification” of founding fathers was frowned upon. “The sheer tonnage of complexities & failings of these people I couldn't get,” Miranda said on Twitter. “I took 6 years and fit as much as I could in a 2.5 hour musical.” Are we forgetting that the musical itself was a landmark for black and Latinx artists? Miranda’s concession is too humble. His intention with the show was that it be a “powerful statement without having to be a statement”, he told the New York Times in 2015.

Representing American history with people of color was what made Hamilton so impactful. Because our country was built by slaves/POC, the founding fathers just signed the documents. Despite all this, critics can only focus on the historical “inaccuracies”? The plot doesn’t revolve around the establishment of slavery, but it isn’t entirely ignored. “We’ll never be free until we end slavery,” is a standout line from act one in the song “Yorktown.”

We can’t go to the grave of Johns Hopkins and cancel him. We can condemn his participation in an oppressive system, and learn from that. Retrospect is a part of progress, but so is thinking here, now, in the present. The Black Lives Matter movement is a new spark of proactivity. Recognizing ills of the past is a major part of the BLM agenda, but more so are the present and future of POC our country. Anthony Singleton, a black student at Hopkins and the sophomore class president, was quoted by the Baltimore Sun as saying that “It was a terrible thing that happened, but look how far we have come... I don’t think this should be a divisive time.”

When I step foot on campus for my first semester, I’ll look around and acknowledge that the institution was founded during a darker time in American history, and the brick and marble buildings were built on a foundation of oppression, made possible by systems of racial injustice. But I’ll also look around and see a diverse student body that is actively making history, not trying to rewrite the past. This is the same contrast that makes Hamilton so appealing. Historically unjust systems rectified by proper representation and inclusion today. As Lin-Manuel said of his cast: “Our story should look the way our country looks.”