A hunch that college was more fun in the 1970s. 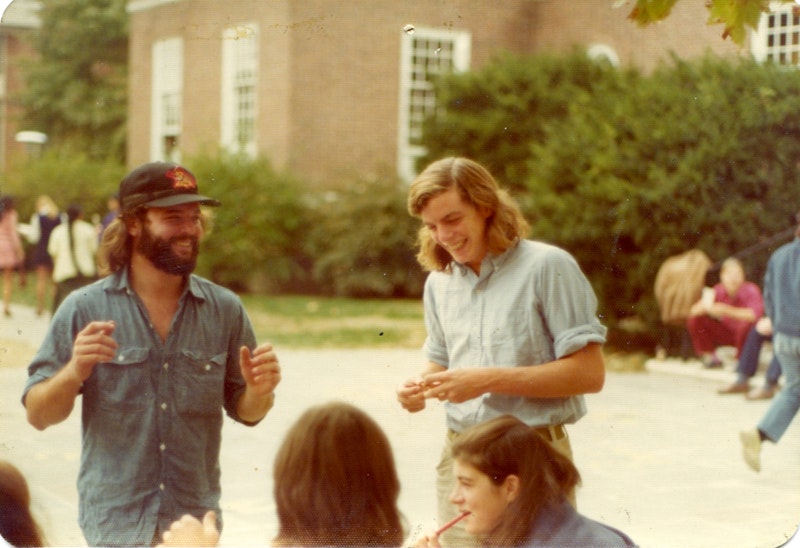 Jonathan V. Last, the outstanding, and prolific, journalist who plies his trade mainly for The Weekly Standard—and a wise choice to replace David Brooks, Gail Collins or Maureen Dowd on The New York Times’ op-ed pages once those three are exiled to the daily’s Sunday magazine purgatory—contributed a curious “Casual” for the Standard in its Jan. 27 issue. He opened with a swipe at older writers (Last isn’t yet 40) who felt compelled, upon the welcome tide of marijuana legalization/decriminalization, to recount their own “youthful” experimentation with pot. (I’m a Boomer, and guilty of the charge as well, though I don’t pretend that my own toking history was anything but loads of fun and hardly occasional.)

Last, who went to high school in the late-1980s and early-90s, says: “It drives me slightly meshuggah when people say that ‘everyone’ does pot. Growing up, I never touched the stuff. And neither, so far as I know, did the vast majority of my friends… What kept us from doing it was fear… Get caught with drugs and you could go to jail.”

Holy mackerel, what a straight-arrow! And while I won’t pass judgment on Last or his friends, let’s just say he might’ve been hanging out in the wrong crowd. Pushing on, Last says in retrospect the notion that drug busts, especially in suburban areas, weren’t frequent by that late date, and though he doesn’t regret missing the opportunity of learning to roll a tight joint—risking immodesty, my ability at that “practice makes perfect” skill was off the charts—he feels he might’ve “abdicated the empire of my youth.”

As it happens, Last and I went to the same university—Johns Hopkins—although separated by two decades. (He graduated in ’96; my long-lost diploma was awarded nearly 20 years earlier.) The campus life he describes at JHU is completely foreign to me, and, not to be impertinent or nosy, but really, did he ever have fun during his college years? Hopkins has the reputation—probably exacerbated today since the undergraduate student body has doubled from when I began in ‘73—as a school for “throats” and “nerds,” which I guess comes from so many students on the pre-med track.

Witty as ever, Last, who received a degree in molecular biology, writes: “Under such a [strict, grade-conscious] regime, rock ‘n’ roll was an intolerable waste, sex was but a rumor, and drugs were a time-sapping indulgence likely to get you sent home. We had a term for the kind of coddled, slow-witted kids who could get stoned and still stumble into A’s. We called them history majors.”

I was a Humanities major, and though I “stumbled” into an A just two or three times—the gentleman’s C worked fine—there were plenty of pre-meds and economics majors who could be found on the benches in front of the student union, in broad daylight, happily passing a joint around while a couple of musicians strummed their guitars. I guess the rules were looser in the 70s, thankfully, or at least not enforced. For example, in ’73, the drinking age in Maryland was 21 (the next year it was lowered to 18 for a few years, and a campus bar immediately opened), and while it was difficult to buy beer off-campus, especially if, like me, you looked about 16, there were suds a-plenty within the university confines. Fraternities were frowned upon back then, but not their parties, where anyone could get loaded for free. And on weekends, at least in warm weather, there was always a keg near the freshman dormitories or Shriver Hall. A pro-forma campus security force roamed around, but those fellows looked the other way when victim-less mischief presented itself.

In fact, one spring afternoon in ’74, one of my buddies chatted up a guard, and the poor guy could barely walk two hours later, blotto on beer and hashish. Bad career move: we never saw him again. One night, it was raining outside the faculty club, where I worked in the parking lot—keeping non-members out and helping old ladies out of their cars—and as it was a really boring job, I pulled out a reefer and smoked it under the cover of the club’s awning. Didn’t realize that the dining room window was open, and soon my boss appeared, asking, “Oh man, why do you have to do this shit here?” I replied honestly: “I don’t want to get wet.” He nodded, figured that made sense, and suggested I be a little more discreet in the future. Once, while enduring a final exam in a large auditorium, for which I was utterly unprepared, I thought nothing of taking a razor blade, chopping up my “study aid,” rolling a dollar bill and zooming off to a wonderfully literate essay about Yeats. No one around me blinked, although I suspect if talking was permitted a few neighboring students might’ve asked to bum some of the crystal.

By the way, this is no confession to rank profligacy, for I did graduate, as did the majority of my “druggie” friends. And what I learned working at the school’s newspaper—interviewing Andy Warhol, Eugene McCarthy, Hunter S. Thompson, Jerry Brown and Tom Paxton, among others—proved invaluable. I’m guessing that the seriousness quotient at colleges escalated sometime during the Reagan administration, and has progressively become more severe. And bear in mind that Jonathan Last graduated in ’96, prior to the post-9/11 key card security systems and unconscionable tuition fees. It’s splendid to be 20 years old, but reading an essay such as Last’s (who, it bears repeating, has done well in his chosen profession), makes me glad I went to high school and college in a less, pardon, “uptight” era.