You’re Not as Cool as Johnny Cash 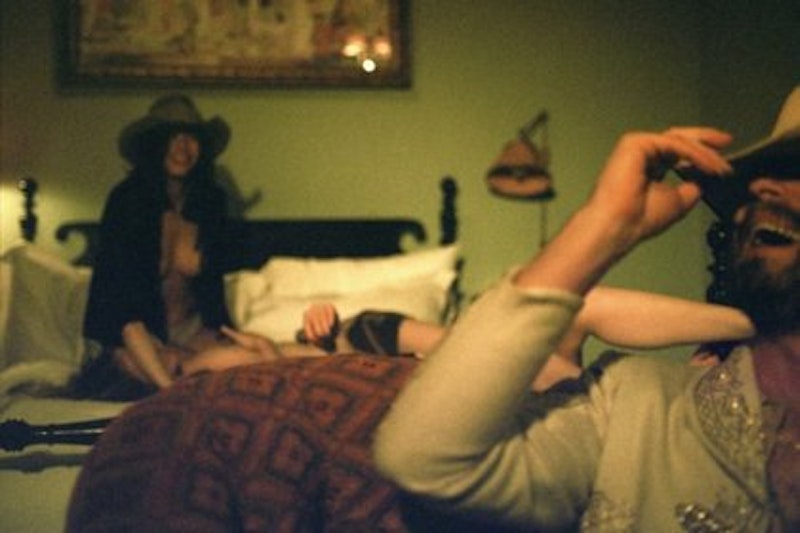 "Some say love is a burning thing/that it makes a fiery ring," Matthew Houk warbles at the beginning of his latest single, "Song for Zula." His voice catches and the music surges and shimmers as he earnestly confides, "But I know love as a fading thing/just as fickle as a feather in a stream."

Houk is, of course, referencing the classic Johnny Cash track "Ring of Fire." Cash's song is a straight ahead, hit-radio ode to the painfulness of passion—performed with his trademark trundling beat, it delivers its simple message in two and a half minutes, and then gets out. Houk, on the other hand, offers a six-minute tour de force of searing honest vacillation, a towering work of genius rising up from Cash's simple blueprint.

Or at least I think that's what I'm supposed to get out of "Song for Zula." A less charitable reading might instead see the track as a bloated, shapeless, default-hippie self-mythologizing mess.

In ostentatiously complicating Cash, Houk can perhaps be seen as offering an alternative to Cash's baritone working-man plain-speaking masculinity. For Cash, love is fire; for Houk, it's one thing and then another, he is a sensitive new age guy, and his feelings cannot be contained in your three minute song. The end result, though, is not that Houk is deep as to suggest that "sensitive new age guy" is just a euphemism for "narcissistic windbag." The droning, fourth-drawer Neil Young imitation backing plods on as Houk praises his own sterling, uncontainable romanticism. "My feet are gold. My heart is white/And we race out on the desert plains all night." There's something about a cage, how he's a killer, being free and not being free and it's all transcendent and lyrical.

In contrast, Cash's "Ring of Fire" doesn't come off as romantic at all. Instead, it's stolidly hokey. The famous Mexican horn flourish makes it sound less like he's falling into a ring of fire than like he's unaccountably wandered into a bullfight. His phrasing, always rugged, sounds particularly tongue-tied here. The first word, "Love," is almost off-key; the repeated, "ring of fire/ring of fire/ring of fire" at the fade is so weirdly clunky it sounds like the record is skipping.

The only part of the Cash record that comes across as even vaguely professional is the backing by the Carter Family sisters, June, Anita, and Helen. Their mountain harmonies are mixed low… but not low enough to erase their incongruity. That incongruity, though, is actually kind of appropriate. "Ring of Fire" was written by June Carter about the experience of falling in love with Johnny Cash—which, as she said on more than one occasion, was a scary thing to do, what with the massive pill addiction and the out of control rock star antics.

The lyrics may sound simple, then, but the circumstances give them a complicated, and even perverse, double meaning. Cash is singing a song about falling in love with himself; he's ventriloquizing his soon-to-be-wife talking about him, even as she sings in the background a song that, for most listeners, reads as being about Johnny Cash falling in love with her. Identity and gender stumble clumsily against each other, and/or melt seamlessly into one another—love is, in several senses, not being able to tell the difference. "The taste of love is sweet," Cash intones, but whose love? Which love? Part of the sweetness, perhaps, is that awkwardness, the simple rush of falling down, down, down, and not being sure who is falling towards whom.

In "Song for Zula," on the other hand, there isn't really anyone to stumble against. Maybe that's why the YouTube promo image for the song shows some random woman with her face blurred out and her breasts almost spilling out of her jacket sitting on a hotel bed while another women with her face obscured lies beside her and some ill-shaven alterna-bro laughs heartily in the foreground. The would-be expansive, would-be introspective balladeering is, it turns out, just a soundtrack for banal soft-core. For Houk, the problem with "Ring of Fire" is not so much the metaphor as the topic. Sensitive geniuses don't fall in love, apparently, at least not with other people.