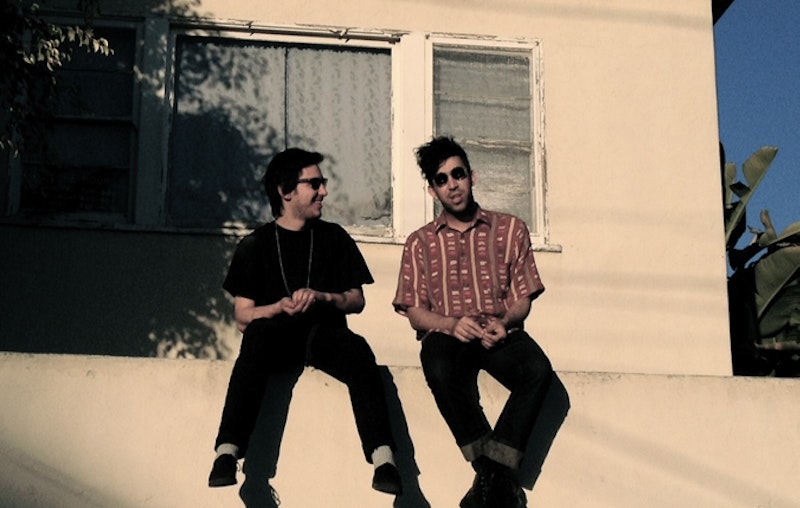 The jangle abides. You've heard it before: naive guitar jangle in the 1980s, studied guitar jangle in the aughts. Slightly slippery and in the hinterlands between perfect pitch and no tune, the jangle telegraphs a specific aesthetic that encompasses a variety of signifiers—"vintage British indie," being an art student, owning more than a couple K Records singles, et al.—and on its own, the jangle is boring. "Airborne Kawasaki" is a treat because San Diego's Heavy Hawaii figured out a way around that issue, or, I should say, three ways around that issue.

Solution One: sonic treatments that leave the vocals sounding warped and sedated. Solution Two: Beach Boys-esque harmonies. Solution Three: counterpoint guitars that strive against the cutesiness of their cousins. What we end up with feels simultaneously cheap, clichéd, and pleasantly distinct, like a Marvel Team-Up featuring Quinn Walker, Beck, Cornelius, the Flaming Lips, and a Ford F-150 full of Miller High Life tall boys. If this song's your cuppa, think about snapping up Goosebumps, the forthcoming full-length this is sourced from: there's way, way more to feel conflicted about where "Airborne" came from.

Trapped in an endless loop of opaqueness—this music is too fragmented and process-derived for "emotion" to work as a qualifier—Lauren Pakradooni is inscrutable. But as I've contended here and in other places, clarity isn't godliness and directness is overrated. The second side of LICENSE cassette unfolds in three distinct parts: poached-sparrow electronic squeal then squelch against a backdrop of pressure-treated beats and vocal substrata; a scrambled-egg raga for electric guitar and non-committal intimations; and some jeweled ambient strychnine that transitions into temperamental ellipses. ("Side A" opens with something relatively conventional, but gradually unravels into an impressionistic expanse of dry-heaving dots and Velcro'd loop-de-loops.)

Pakradooni has a wealth of conceptual and visual art background, but LICENSE appears to be her first foray into music. Some of her work is on the cover of the new Ducktails album, which is awesome. But take whatever you were gonna spend on the Ducktails album and spend it on LICENSE instead; it's like wandering through a gallery show and watching every art object fall apart and re-assemble itself as something slightly different 10 times per minute.

The party seemed eons ago now. Looking aft, she saw deepening indigo, raw strips of cloudlet, hints of starlight, crooked and towering shadows. Meanwhile the ravine rushed up at Cindy, and her into it, Jody and Melanie lost somewhere up ahead in the mossy darkness, second by second cooler, more intimate, hyper-real.

She felt her hoodie snag a branch, and then she was free of it, and she knew then that it was lost forever, consumed by loam with keys, diaphragm, lipstick. Leaves smacked her face and clawed at her eyes. Everything was all happening so swiftly, so suddenly, and yet it felt inevitable. Any second now steepness would give way to free-fall. For now exclamations were breadcrumbs.

There was everything to feel and nothing to see but she imagined the blackness framed by minimal gray shadings, outlines, as if she were Daredevil, as this were how fate insisted that she experience the world. Then came the taste of dirt, a night crawler encircling her right index finger, Melanie incoherent and fumbling with a flashlight.

"Where are we?" Cindy believed she was howling, to silence. Melanie was hitting herself in the face with the flashlight. Jody was digging into the earth and displacing heaping handfuls of it, his jaw slack, his eyes wide. For a while the girls bled and panted, watching him work methodically and maniacally until the hole he was digging widened appreciably and the ravine flooded with an intense, unholy light and he tumbled headlong into the wonder.