On their debut album, Reasons to Live. 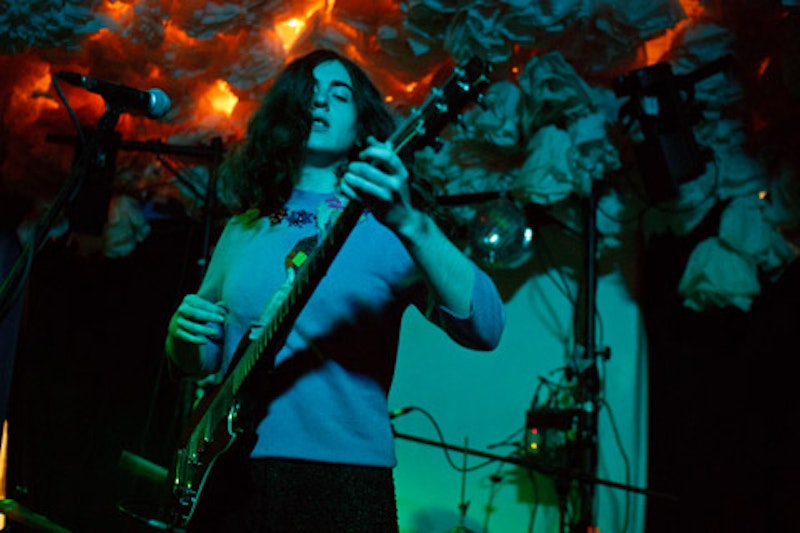 On Hilly Eye's debut LP, Reasons to Live, the Brooklyn duo present an electric combination of dignified and expansive rock. Hilly Eye is the new project from drummer Catherine Tung and Ex-Titus Andronicus guitarist Amy Klein. The band is about as reductionist as a rock band can get. There's no bass player, no backing tracks, no reverb-soaked vocals. Yet the sound that Klein elicits from her guitar—an insouciant and aggressive growl—is a study in controlled maximalism. “Amnesia” has such a thick crunch that the band almost sounds like a slowed down My Bloody Valentine. Indeed, what you find on most of Reasons to Live is two people serving as each other's sonic foil. Tung's sparse yet persistent drumming keeps Klein in check, never allowing her to drift too far into guitar antics. Klein's guitar playing is clever and self-aware, basking in the strictness of the slow tempos. “Jersey City” comes across as the most dirge-like. Both members harmonize with one another over a repetitive guitar part only to be broken by an unexpected feedback squall and power chord explosion. “You've got an appetite for destruction,” Klein sings, sounding less like Axl Rose and more like his worst nightmare.

While it'd be easy for the group to present a series of slow-burning tracks, “Doubledutch” reinforces the rock ethos of the album. With it's mostly-tapped riff it starts out more like Marnie Stern until it takes a turn into a series of vocal harmonies. The album does an impressive job of balancing the angelic with the heavy. The vocals on the chorus of “Louisville” sound all the more impressive when you realize that there are only two layers. Admittedly, it's a bit hard to find out what exactly is being said at some points. However, to focus on what exactly is being said on most of the album's tracks feels secondary to connecting with how they are being said. Klein's lyrics come across as mantras doled out in specific and elongated breaths. When that breathing becomes upset, you find a deeper meaning in what she's talking about. “Animal” is the band at their most empowered. “I can, I can, I can/I want, I want, I want” turns into a portrait about women who get beaten up and men who get beaten down. “Keep your promise to the girls/Tear apart the fucking world” Klein declares, making it sound as if the opposite sex should be the one counting their own reasons to live.