Xiu Xiu is Knee-Deep in the Deep Muck

Taking it all down with you. 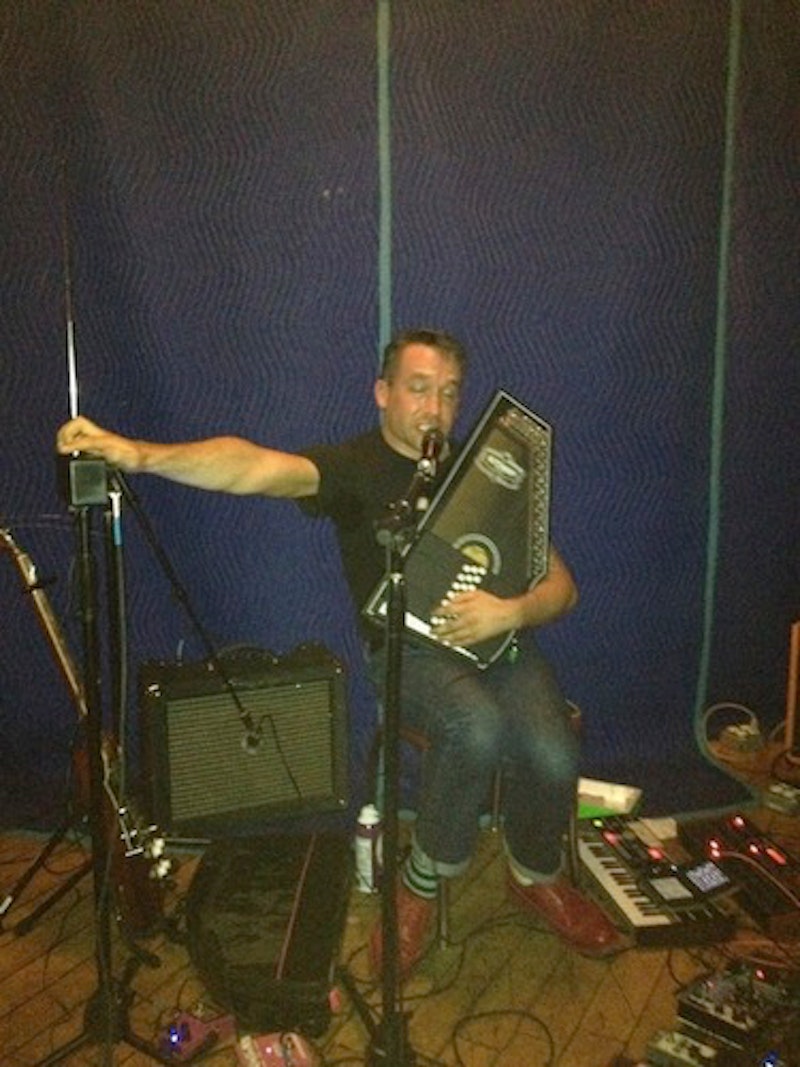 Jamie Stewart has stood alone even among other outsider pop auteurs, making aggressively dark, hostile, and often dissonant music as the sole constant member of Xiu Xiu for the past 10 years. Harsh noise like Merzbow and Prurient is sonically tougher to swallow but Stewart’s deeply disturbing pieces on rape, abortion, child molestation, Marine murder, kinky sex, gender dysphoria aren’t just angry or sad—they’re despondently suicidal. Even The Air Force, Xiu Xiu’s most measured and balanced record, is the sound of a horrifically damaged psyche. Standing three feet away from Stewart as he performed solo two nights ago at the Golden West in Baltimore was like watching someone convince himself off a very tall ledge. It puts you in a fugue. Stewart’s voice is warbling, melodramatic, and totally unrestrained: Morrissey having the worst panic attack of his life. People react to the brutal abyss of Xiu Xiu’s music in different ways: a loud, obnoxiously drunk woman a few feet to my left moaned that she needed to get outside because “this guy is just up there getting his feelings out or whatever.” Two songs later, what I hope was the same woman collapsed in a ball to the floor, either too drunk or reduced to the fetal position by a severe anxiety attack.

Stewart is performing by himself on this world tour, and his set spares no one. Funereal Air Force songs “Wig Master” and “Buzz Saw” were rendered into complete holocaust synth drone screeds, swallowing a rapt audience in a deep blue abyss of sound over anguished cries of “I’m not like that/I’m not so good/You’d want to run away/for us.” A low, almost inaudible bass sound thrummed throughout the whole set, making the palpable sense of dread and terror feel even more real. Stewart cooed, whispered, cried, wailed, and warbled through his 45-minute set as if it were the end of the world, slapping himself hard in the face at times and thrusting his fist out to make his theremin scream bloody murder.

I recognized only five songs: the aforementioned Air Force cuts, “Rose of Sharon” from La Foret, and “Hi” and “I Luv Abortion” from Always, the latter perhaps serving as the emotional climax of the set, centered around the panicked, screamed line “I LOVE ABORTION I LOVE ABORTION!!! YOU ARE TOO GOOD FOR THIS WORLD.” A lyric that would disgust most people, but can they honestly say they’ve never before felt the desperation and despair in Stewart’s? If not, they are delusional. Xiu Xiu is about the vilest ugliness of the human spirit and how to reconcile that with beauty, simple pleasures, ice cream, cats, the smell of libraries. In a note written by Jamie in desperate times up on his website, he lists these and other reasons why suicide is ill-advised—and it’s impossible to know, but I think if Stewart was going to kill himself, he would’ve done it a long time ago. His art often exists in that panicked, irrational, totally hypnotic state of despair and confusion, and the allure of oblivion against a lifetime of suffering. So few artists, especially today, are as courageous as Stewart when it comes to exorcising their pain.

The people that made snide, dismissive remarks, or left early in the set, weren’t interested in immersing themselves in that deep muck. For those who’ve felt that emptiness, it was an utterly hypnotizing performance, an elevating 45 minutes where nothing existed except this cruel, twisted, and tortured sound. And unlike so many schlocky shock noise bands you’re likely to find shoving microphones into amplifiers at one a.m. in a warehouse, the real tragedy in Xiu Xiu’s music is how it’s the sound of something pretty and innocent being molested. With just an autoharp, guitar, a few synths, and a Nintendo DS, Stewart melted nursery rhyme melodies and child-like chime sounds with the most cacophonous and dissonant chords imaginable into a deeply moving performance of supreme pathos. Like an accident, an attack, or a murder, it made everything else left in its wake, feel somehow less real.