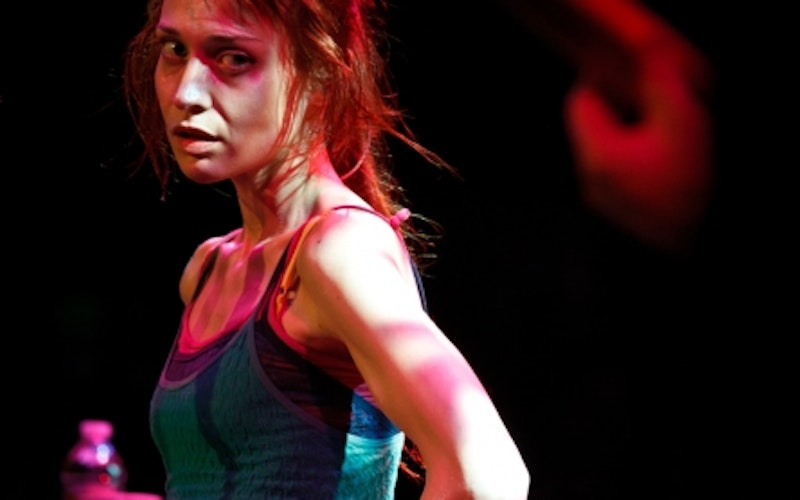 Fiona Apple, “Anything We Want”

So I quite like the line about the narrator looking like “a neon zebra shaking rain off her stripe,” and the one about oblique kissing strategies, and the one where the UFC gets a shout out, and also how the water/waves shift is labored but then it isn’t, too. But if The Idler Wheel… were a sartorial choice, it’d be a doo-rag worn over graying hair, and on this album in general—and “Anything We Want” in particular—Apple sounds tired in a middle-aged way. Not defeated, just humbled, put upon and trying to nail down that feeling without allowing herself to be impaled by it. The theme is, maybe, true love’s boundlessness, and how at its best it should leave you feeling exhilarated and ageless and somehow beyond life’s inquisitions and indignities. That’s what Apple’s trying to sell but the quaver in her voice puts the lie to the myth as much as the phrase “and then/we can/do anything we want” does: because the sad truth is that most of us just can’t, really, and because growing up—unable to play hooky in any meaningful way—is the process of internalizing that. Is that quaver actually hope? Fear? Either way, I get brutal goose bumps just thinking about this song.

Born on a steel drum-similar instrument called the Hang, “Idle Hands” ably straddles the purposeful and the aimless; a vivaciously mystical melody is embodied in Ximm’s sub-xylophonic patter, but at the same time there’s a beach drum circle looseness to the song—think of waves, think of Bill-A-Bong tattoos—that creates an impression of viable and justified egress from rhythmic strictures, should the need arise. A video treatment might contemplate, profitably, a half-hearted monsoon. You have to think about this song afterwards. During, the torrent of struck-metal poings is excessively generous, with each new poing melting into the next and the one that came before as well, solar systems of purely percussive poings in the vicinity, so that the effect can feel similar to that of trying to deconstruct the experience of head-spinning intoxication while head-spinningly intoxicated.

“B1,” from Lericolais’s End Print cassette, presents as a musical metaphor for sudden, crippling blindness, and the difficulties inherent into translating a lack of sight into a user guide to navigating a sightless universe for the first time. This music is uneven and oppressive—if you’re able to think of it as music and not a sort of stress test—so there’s a great of initial discomfort in, say, a sonic construct that implies the shuddering physicality of a closely passing tram, the sour immensity of minor chords crashing and clashing at peak volume, volleys of video-game artillery file, gratuitous electro-acoustic horseplay and high-jinx, basement-bound cocksuckers jamming forks into strangers’ effects pedals just for kicks. Danny the Street teleportation fantasies, perhaps? I don’t know. At times “B1” is full-bore nightmare symphony, hideous winged monstrosities screaming up from the flames of smoldering charnel houses. And then sometimes it’s a celebration of robotic French intonation and insidious tape-deck abuse. No matter; I love it all.