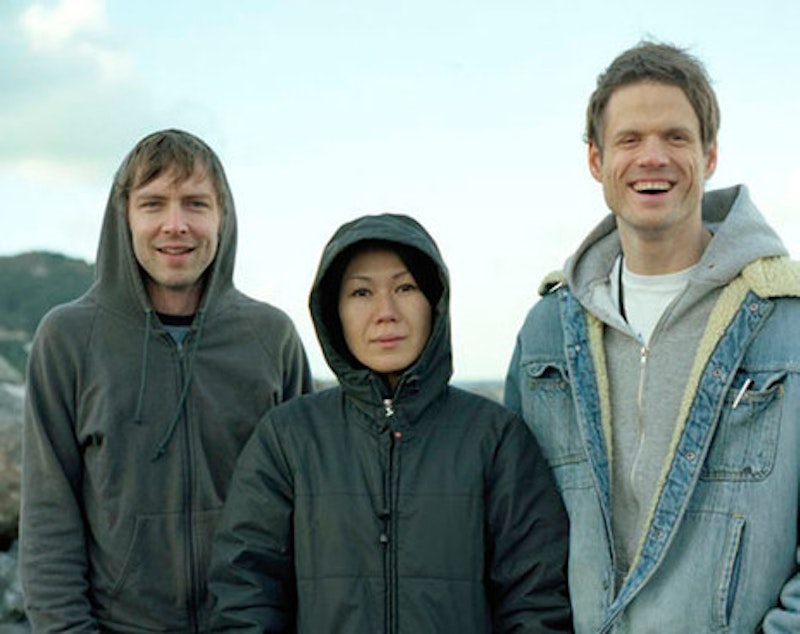 Deerhoof’s Breakup Song kicks ass. I drifted out of focus with the band around Friend Opportunity; I was let down by that record, and the well looked like it was running dry after their stunning three-record run from 2003 to 2005: Apple O’, Milk Man, and The Runners Four, all classic records that are islands unto themselves. Breakup Song stomps, the band’s heaviest yet. Deerhoof says this is their party record, and songs like “There’s That Grin,” “Zero Second Pause,” and the title track are all meant to be blasted out of club speakers. Deerhoof have always rocked but there was a pronounced looseness and shambling live feel to their rhythms. They’re still rockin’, but Greg Saunier’s minimal trash kit never conjured the severe low end that’s all over Breakup Song.

The fact that Deerhoof are still touring small clubs instead of sold-out amphitheaters is an abomination. The comparison to Captain Beefheart and Zappa is made often, but I don’t see it. They’re a rock/pop band. They write really catchy songs. Their riffs are better and heavier than pretty much every warmed-over cock rock band that might get people excited these days (Japandroids, Cloud Nothings, Sleigh Bells). They have a long and celebrated catalogue stretching back to the late 1990s. Is there baggage that comes with being an out and proud Deerhoof fan? I’m not sure if they’re perceived as a “joke band” by some, but if that’s the case, isn’t it obvious these people haven’t heard The Runners Four? Deerhoof can go from lush pastoral pop to weirdo funk to garage rock in six minutes flat, and there isn’t an ounce of irony or contrived cuteness in their music. And please stop comparing Satomi Matsuzaki to Yoko Ono. Easy cop out, but it’s not even close.

Anyone turned off by the goofiness of songs like “Panda Panda Panda” (lyrics: “Panda, Panda, Panda, Panda, China”) or “Flower” (“Flower, Flower, Flower”) or “Gore in Crown” (“Bunny bunny bunny bunny bunny”) are depriving themselves of pleasures like “L’Amour Stories,” “Spirit Ditties of No Tone,” “Dummy Discards a Heart,” or “Milk Man,” enormously emotional, touching, real, and rocking pieces of work. But even the most cynical won’t be able to resist grooving to Breakup Song. The guitars are dirtier and crankier than they’ve ever been, and they’re locked in mechanically with Saunier’s kit, which sounds beefier than ever.

The filthy, mechanical, and rhythmic guitar sound reminds me a lot of Dope Body. I mean, imagine the skronk of Nupping stirred with Matsuzaki’s heavenly deadpan. You would buy that record. There’s no jamming, the hooks and the songs are very to the point, and the whole thing barely clocks in at half an hour. A perfect party LP, one that doesn’t overstay its welcome and hits you over the head multiple times song after song with its filthy chainmail greatness. Don’t say it’s a return to form: Deerhoof have delivered a record that sounds like nothing else, even their old work. There’s no better reminder that they’re one of our greatest active bands.