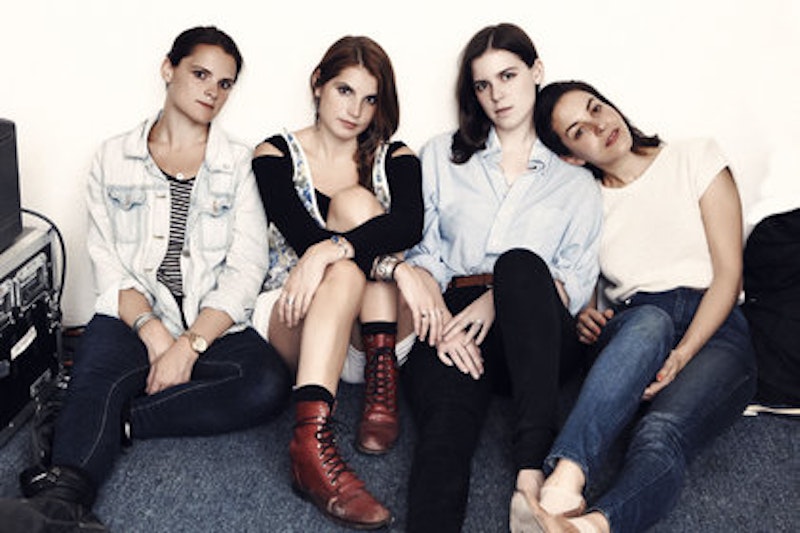 So there’s nothing wrong with “Coral,” per se. The guitars bang along in a way that’s carefree yet locked-down. The drums are rudimentary, unskilled. The vocals suit a melody that suggests intense cloud-watching experienced from the back of a car moving quickly, with the view unimpeded by trees, mountains or skyscrapers, that are definitely traveling but without a set destination. It’s just that “Coral” couldn’t be any more “indie-rock starting point/garage-rock preset” if it tried, and if I had to guess I’d peg this as Yoodoo Park’s first song ever, and even as the thing goes viral, infecting auteur blog after auteur blog in typical feeding frenzy clusterfuck, I’ve no doubt that the kid has since written three or four albums of songs that are better and smarter than “Coral,” and he’s likely long since over it. With luck, “Coral” hasn’t defined him yet, and there aren’t hordes of idiots straining at the bit to grouse in 2019 that “I loved GRMLN back when ‘Coral’ dropped but everything since has been utter shit.”

Is it wicked to admit that I’m infatuated with the last 60 or 70 seconds of “Unable,” and that everything that happens prior to that point is so much cinema verite window dressing, a windier version of what Beach House sounded like before I somehow lost track of that band and started supplementing my first-hand Beach House knowledge with breathless Pitchfork commentary?

The ending of “Unable” like the wicker-woven equivalent of synthesizer quilting, just this very careful and fastidious overlapping of tones to create something simultaneously static and brilliantly alive; the result is sort of magical without being ostentatious about anything, walking a line between the raw hyperactivity of some early live versions of Animal Collective’s “Brother Sport” and the Robert A.A. Lowe/Rose Lazar album Eclipses and leading the consciousness for a meandering, lobotomized constitutional. I wish Teen would stop singing and voice layering altogether and just focus on expanding the end of this song into 70 minutes of busted-perception forehead melt. If only.

In the Adam Sandler/Drew Barrymore vehicle 50 First Dates, Allen Covert plays a minor character known as Ten-Second Tom, a brain-trauma victim whose memory automatically resets after 10 seconds. That means that if you met him, the initial exchange of introductions would need to be followed immediately by another, and another, and another, ad infinitum. A juvenile gag in an already juvenile movie, it doesn’t take Ten-Second Tom long to go from mildly amusing to nauseating to crushingly sad.

The last decade of rap has seen a rise of what I like to think of as “Ten-Second Tom hip-hop,” a sub-sub-sub-genre that dispenses with storytelling or the traditional notion of narrative in favor of a construct where every verse occupies its own bizarre, stand-alone universe. No, not punchline rap, or its obnoxious cousin, hash-tag rap, but rather a strain wherein a single song can veer in multiple directions without any responsibility to actually cohere. Initially popularized by the likes of Lil Wayne and Gucci Mane, “Ten-Second Tom hip-hop” is, of late, the provenance of Lil B and Riff Raff, whose recent Birth Of An Icon mixtape boasts cover art worthy of wallpapering my den’s south wall.

It’s not so much that Riff raps in wall-to-wall non-sequiturs, but that most of his very songs are sub-non-sequiturs themselves: abject non-starters, question marks, provocations, teases, fill-in-the-b(l)ank. For instance, Icon features a certified head-scratcher called “White Sprite,” where Riff seems to be grousing about haters while watching TV in a darkened bedroom, sipping Sprite—and that’s it. And since these ideas come equipped with visuals and beats that grossly exaggerate all previously existing over-exaggerations of what rap is, screaming “pisstake!” and raising both eyebrows doesn’t feel like alarmism for alarmism’s sake; it seems like a natural response.

I mean, it’s all so fucking silly, but at least “Deion Sandals” isn’t oppressively scatterbrained. (You did read that title right.) The theme is common to navel-gazing hip-hop manifestos—“I am better than you are, so please follow along while I patiently explain why that is”—but here it feels fresh because a) Riff doesn’t appear to be heavily invested in anything he’s declaring, i.e. you get the sense that “Sandals” was maybe the fifteenth track he laid down in an all-day session, and b) everything he’s communicating is crackers. He doesn’t want your girlfriend because she looks like Jay Leno; there are allegedly so many diamonds on his fingers that one might be led to believe that he slap-boxed a penguin; a reference to Walker: Texas Ranger is randomly shoehorned into an already convoluted verse, presumably because Riff has a man-crush on Chuck Norris. And when he brags about rolling up “in the candy goldfish” on May 5 of an undetermined year, nobody on Earth believes that he believes that he’s talking about an actual car.

And at the end of the song, there’s really nothing to walk away with except that Riff Raff is a lunatic from another solar system (or Southland Tales), so the listener is compelled to revisit and revisit this nonsense to try to get it. Don’t be taken. This is a tactic; this is a trap: it’s how cults are born. You know: innocent sociological inquiry begetting a nasty case of Stockholm Syndrome. I’d like to think this is a fad, but a lot of people wrote Beck Hansen off as such almost 20 years ago; now, most of us are salivating for whatever guise he’s adopted for his next studio album. Life is weird.