You Got to Shake It, Baby

Steely Dan and art of the slow burn leading up to the incendiary. 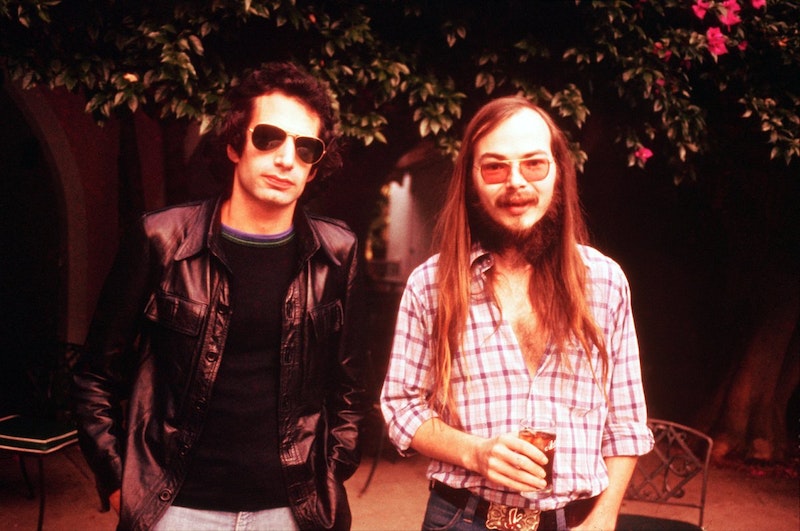 While Steely Dan's developed a passionate fanbase over the decades, the band has a hate club as well. "Psuedo-jazz for wannabe sophisticates," a description I've seen, encapsulates the gist of the disdain; "lounge music" is another put-down. The lyrics are sophisticated, and their songs are packed with fancy jazz chords not normally found in rock songs, although that doesn't make it "pseudo" anything. The band's music caught on quickly, so maybe, by the time the 1970s rolled around, people were ready for lyrics that went beyond "baby I'm-a want you," and harmonies more complex than the standard I-IV-V rock progression. To Steely Dan's older, four-chord-loving detractors, adding major seconds to major triads (the so-called "mu chord") is pretentious; younger naysayers dismiss them as bland "dad rock.” To devotees of the punk aesthetic, the band is simply the Antichrist.

New York art critic Jerry Saltz weighed in on Twitter, calling Steely Dan "the worst band ever." Almost only men love Steely Dan," he blathered, only to be quickly shot down by irate female Steely Dan fans. Saltz listed the Grateful Dead, as the second worst band of all time, so we can safely dismiss him as a respectable arbiter of musical taste. In the same thread, the critic also added this self-aggrandizing gem: "A good critic always puts more into writing about art work than the artist put into making it."

Steely Dan's lucky to have prominent opponents like Jerry Saltz who shoot themselves in the foot while trying to make their flimsy case. On the other hand, there are the belated Steely Dan converts who wrote them off for years as overly-polished "yacht rock," but then the switch went off in their head one day and all of a sudden they "get it." It's not all that easy to experience repeated exposure to songs with smart, literary lyrics sung with skill, top-flight musicianship, and killer grooves without figuring things out.

The band's founders, guitarist Walter Becker and keyboardist/vocalist Donald Fagan met while students at Bard College. Over time, they shed all their fellow band members to form a creative duo that would stop performing live, devoting their time instead to the recording studio, where they favored a painstaking, polished-gem approach to making records; "precision" defined their work mode. Perhaps that's a quality that turned some music fans against them—the ones who want their rock looser and more spontaneous, as in, for example, the murkier sound on the Rolling Stones' Exile on Main St. It's possible to sanitize all the soul out of music with too much production, a tendency Steely Dan always struggled with.

Freed from the need to involve other band members, Becker/Fagan brought "first-call" session musicians into the studio to execute their explicit instructions on the sounds they were looking for. "Babylon Sisters," a slice of L.A. noir off of their 1980 album, Gaucho, represents the apotheosis of Becker/Fagan's meticulous studio process. The only audio contribution either of them makes to the song is Fagan's world-weary vocals; the rest of the sound was outsourced to musical hired guns who sat by their phones and waited for the call.

Many associate Steely Dan with guitar and saxophone performances, but Becker/Fagan valued the drums equally. "Babylon Sisters'' is built upon the foundation of a drum beat known as the "Purdie shuffle," invented—and played on the song—by Bernard "Pretty" Purdie, who lays down a "swing" groove that's a set-up for the song's payoff in the chorus.

Purdie's delicate with his high-hat cymbals work. With the snare drum, he inserts quiet "ghost notes'' in between high-hat hits to form the "triplets" that define the shuffle beat. He throws in the occasional backbeat with the snare, played louder than his ghost notes, adds the kick drum, and that's his signature shuffle groove that can be found on countless songs, including former Steely Dan drummer Jeff Porcaro's variation of the Purdie shuffle that he plays on Toto's "Roseanna."

Becker/Fagan made sure their imported drum superstar had the space he needed to lay down his killer groove by restraining the rest of the rhythm section. Don Grolnick keeps out of Purdie's way with his basic electric piano, and Chuck Rainey plays a no-frills bass line. The result's a sonic infrastructure into which Purdie can work all his ghost notes, and over which Fagan floats his complex melody, intertwining it with an equally complex harmony that never remains static throughout the song.

The uncluttered, languid sound during the first verse sets up the listener up for the contrasting climax that comes with the sudden arrival of the all-star backup vocals team—the element of surprise gives it an extra punch. The women start off singing, "Babylon sisters," drawing out the last syllable to build anticipation, and then Becker/Fagan throw ammonium nitrate on Purdie's slow burn with perfect timing. The eruption happens when the backup singers finish with an emphatic, clipped "shake it!" There's a stunning level of precision behind the satisfaction those two words are able to deliver. The impact's amplified by the restraint leading up to it. Hang in there through the outro vamp for bonus vocal pyrotechnics from the backup singers: "You got to shake it baby/you got to shake it baby/you got to shake it," sung at an exhilarating speed, in perfect unison.

During the 1970s, some Steely Dan skeptics accused the band of musical overkill, but by the time the band got around to Gaucho, which represented a stylistic departure into a more minimalistic, groove-based sound, Becker/Fagan learned how to strip away the excesses and let their music breathe, freeing up space for some wicked grooves.