When Stars Aligned Over Baltimore

The explosive and contagious creativity of Baltimore in 2006 through 2010. 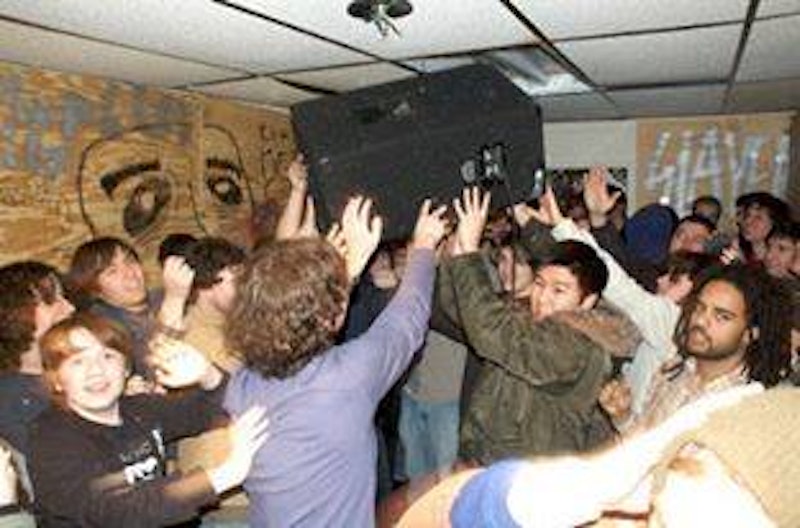 Last week I wrote the first in a series on the phenomenon known as “Retail Rock,” a name coined by former Roomrunner frontman and Double Dagger drummer Denny Bowen, something that we’ve been talking about since I wrote about DIIV’s latest failure in every respect back in February. We’ve written and talked on the phone since then trying to suss out what’s led to the stagnation of innovation and excitement in independent rock music since the turn of the decade. Although we agree on a lot, it’s a matter of perspective: Denny is eight years older than me, and he never cared about Animal Collective. They were a watershed band for me: like I said last week, before Feels, it never occurred to me that a band could forego a bass player in lieu of a sound manipulator, or that a drummer could play standing up without a bass drum, while running his floor tom through delay. The same goes for Greg Saunier of Deerhoof and Brian Chippendale of Lightning Bolt, who were the stars of their respective bands, virtuoso players using stripped down, hodgepodge kits and flailing like art-damaged octopi before slack-jawed kids who went out and started their own bands infected with a contagious creative impulse to carve their own way forward.

I was watching a Stephen King documentary last night, and in it he said that he doesn’t trust anyone who enjoyed being a teenager. “If you had a good time from ages 14 to 18, there must be something wrong with you.” At 23, it’s obvious to me that those were, as far as timing goes, the luckiest years of my life. Baltimore in the mid-aughts was the perfect time and place to be a teenager eager to see, hear, and make music. I took it for granted that artists like Double Dagger, Dan Deacon, Ecstatic Sunshine, Yukon, Ponytail, Videohippos, Hex Screw, Narwhalz (of Sound), The Art Department, DJ Dog Dick, Needlegun, and Human Host would be around forever, and if not, there would always be new crops to come. In 2008, Rolling Stone said that Baltimore had the “Best Scene” in the nation. Reporting for Pitchfork from Whartscape 2007, Mike Powell wrote: “If there's any overall impression from the folks in the city, it's that they very much mean it, that this is their lives, that they have enough conviction in what they're playing, making, breathing to squat in an abandoned building if they have to.”

Coming of age in the midst of a cluster of amazing bands, performances and festivals spoiled me and set my expectations absurdly high. We crowd-surfed a PA! There are too many amazing bands and performances and records and shows to mention here in any depth or detail: most of them deserve their own five hundred or a thousand words. But it Baltimore was the last influential, geographically concentrated scene that truly thrived. I was on stage filming the Dan Deacon Ensemble at Whartscape in 2009 and he implored the crowd that even if they missed that night’s show at Floristree, “there will be a Whartscape next year.” That one ended up being the last, and that gesture of going out on top before things started to suck or get too big really made it seem like an end of an era. The phenomenon of Retail Rock hit me right in the chest because it was a living death for someone so used to blazing innovation belonging to people of my generation, not uninspired guitar bands aping the sounds and styles of the past. How could things tank so quickly? Obviously I was in an oasis for those four years, and I’m grateful for being in the right place at the right age from 2006 to 2010. When I listen to Bromst or Ragged Rubble or Freckle Wars, I remember immediately what it was like when the stars were aligned over Baltimore, and it’s been chasing vapors ever since. Chalk it up to a culturally spoiled teenage hangover.