The introductory entry in a series inspired by the Grateful Dead's Dick's Picks focusing on live recordings of The Smashing Pumpkins. 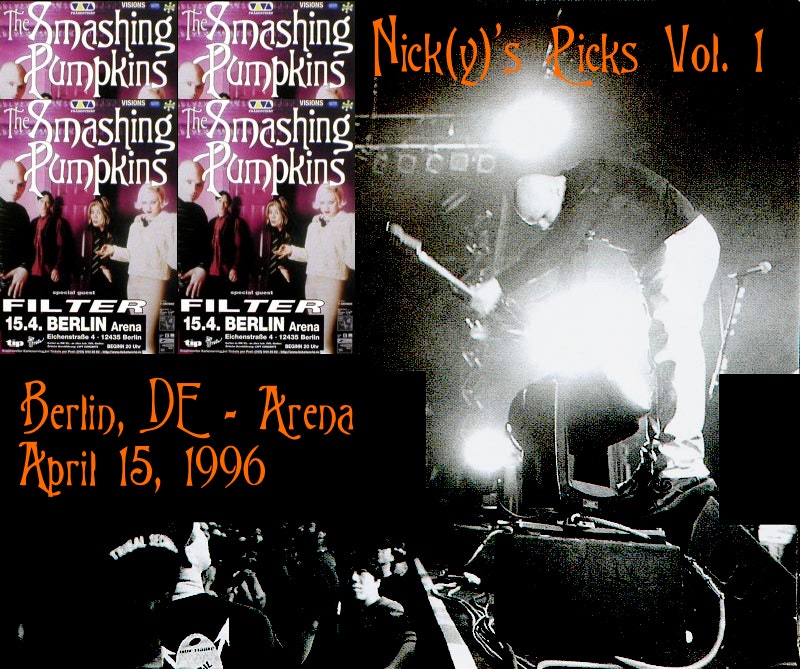 I’m excited to finally share the first installment of Nick(y)’s Picks! Inspired by the Dick’s Picks Grateful Dead series, I’ll be sharing and writing about exemplary and interesting Smashing Pumpkins live recordings. My commentary will be in-depth and very, very long…

Gonna kick off the series with a show that happened 20 years ago tonight in Berlin during the Mellon Collie tour. At the time, the band was at their peak commercially, critically, and as a live band - from January thru July 1996, they were absolutely ferocious, a paramilitary rock unit. This is three months before the overdose that killed touring keyboardist Jonathan Melvoin and sent original drummer Jimmy Chamberlin packing. He wouldn’t return to the band until April 1999 for the Arising! Tour. Although the original four members reunited briefly for that spring 1999 tour, they were never the same after Jonathan died and Jimmy was fired. I love Adore and the Machina records, but during the first seven months of 1996, they were the biggest band in the world and the best they would ever be as a live act.

Recording Quality: A+. This is one of the best audience tapes I’ve ever heard. No, it’s not a soundboard or an FM source, despite what your ears might be telling you! Really remarkable. For comparison, it sounds leagues better than the 10/23/95 Riviera “power outage” show that was broadcast live on the radio around the world. This recording was released as a commercial bootleg under the name "The Berlin Bullet." Unfortunately, the taper and the equipment they used is unknown. I wish I could give them credit and props for an insanely great sounding recording. A couple caveats: the stereo balance is a bit off and tipped to the right. The channel balance fluctuates noticeably at the end of “Zero” and the beginning of “Bullet with Butterfly Wings,” and there are a couple slight volume drops at the beginning of some of the heavier songs like “Fuck You” and “Bodies.” But it’s nothing major to take away from this boot’s A+ rating.

Performance: A+. The band is in top form and in exceptionally good spirits - the crowd was obviously enthusiastic and respectful as Billy thanks them profusely at the end of the show - a rarity! Like I said, in early 1996, the band was at the top of their game and leveling audiences night after night. For some perspective, this show happened eight days after the widely circulated Rockpalast show in Dusseldorf. Personally, that show (broadcast on German public television) might be my favorite Pumpkins ever…and a lot of the quirks and nuances of that performance are present during this show. Billy even apologizes to Rudy the Striker and dedicates “Today” to him and his family! If you’re familiar with the Rockpalast tape, you know what I’m talking about…as far as the Mellon Collie tour mainstays, there are some really exemplary performances here. I think that the extended live version of “Thru the Eyes of Ruby” that the band played in 1996 and 1997 is the absolute pinnacle of the Smashing Pumpkins as a rock band - that power chord and ascending octave climax still blows my mind and gets my heart racing to this day. James would frequently blow the first chord of that outro, but as with the 4/7/96 Rockpalast show, the band just nails it with military force.

Setlist: A. The Spring 1996 European tour has some of my favorite setlists, with a nice balance of songs that were were excluded from the Summer 1996 American arena tour, along with all the mainstays that they would continue to perform thru the end of the Infinite Sadness tour in early 1997. “Where Boys Fear to Tread” was the most frequent opener during every leg of the Infinite Sadness tour, with “Tonight, Tonight” being the only consistent replacement. In my experience, if the band opened with “Tonight, Tonight,” they were already in a good mood and this is borne out in the show. What makes this setlist exceptional is the inclusion of “Here is No Why,” “Bodies,” “Geek U.S.A.,” “Mayonaise,” and “Farewell and Goodnight.” Those first two were frequently cut from setlists at the last minute or left out altogether because of how hard they were on Billy’s voice. If you’re familiar with the Brixton Academy show that MTV taped, Billy can barely get thru “Here is No Why” - he sounds hoarse and screams when he can’t hit the high notes in the chorus. The performance here is an admirable effort, with Billy clearly pushing himself to hit those notes instead of just screaming his way thru it. The song is at the top of his range as a singer and was rarely performed live after this tour, with only a handful of appearances in early 1997 and never again since. The same goes for “Bodies,” although the band would occasionally pull that out in their second or third encore during the Summer arena tour.

The only reason this setlist doesn’t get an A+ is the absence of “Jellybelly,” another song that was basically abandoned after this tour until early 1997. “Jellybelly,” originally intended as the first single from Mellon Collie until a record label executive talked Billy out of it, was hard for everyone in the band to play. Another song that’s really hard on Billy’s tour-ravaged voice, and one that even the great Jimmy Chamberlin consistently struggled with. Someone asked Jimmy what he thought about “Jellybelly” - he said that the only time he played it correctly was on the take that ended up on the album! Still, it’s one of my favorite Pumpkins songs, and it was performed frequently during this tour, so personally, swapping “Bodies” with “Jellybelly” would’ve made this a flawless setlist. I love “Where Boys Fear to Tread,” but it really only works as an opener in my opinion, so it’s absence here is understandable. Check out the “Germans in Leather Pants” tease after “X.Y.U.”, too!

Again, this show is a must have for any Pumpkins fan, casual or diehard. If you could only keep one recording from 1996, this might be it. It’s in my top five. If you’ve made it this far, thanks for reading, and I hope you enjoy listening to this show.

Mellon Collie and the Infinite Sadness
Tonight, Tonight
Zero
Fuck You (An Ode to No One)
Here is No Why
To Forgive
Bullet with Butterfly Wings
Thru the Eyes of Ruby
Porcelina of the Vast Oceans
Disarm
By Starlight
Geek U.S.A.
Cherub Rock
Muzzle
---
1979
X.Y.U.
---
Germans in Leather Pants (tease)
Today
Mayonaise
---
Bodies
Silverfuck
Farewell and Goodnight