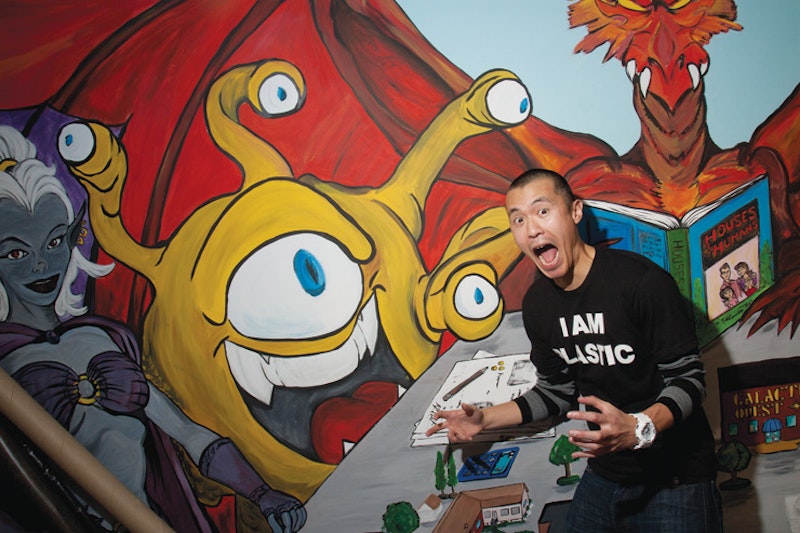 I’d say Adam WarRock is back, but he never took a vacation in the first place. The nerdcore artist is celebrating three years of nonstop rapping with his annual donation drive, bigger and better than ever. From now until the end of July 3, donating any amount through PayPal—yes, even less than a buck—will unlock over a gigabyte of live concert footage, comics, and WarRock’s new 13-track mixtape Speech Recognition.

In June 2010, WarRock (aka Eugene “Euge” Ahn) quit his day job as an attorney to pursue his passion for music full time. He released his first album, The War for Infinity—a concept album about the Marvel Comics story “The Infinity War” with a bonus track about Ira Glass—four months later. The idiosyncrasy and range of its lyrics quickly carved out a niche for WarRock online, cemented by his hit Browncoats Mixtape (which explored the characters and themes of Joss Whedon’s cult classic Firefly) and his second CD This Man…This Emcee! the following year.

Now, WarRock has hundreds of tracks to his name. He’s primarily known for his comic book-inspired rapping (tracks about the Fantastic Four, Magneto, even the much-derided West Coast Avengers), but frequently delves into other pop culture properties he loves for subject matter—NBC’s Parks and Recreation, the House of Slytherin from Harry Potter, and Game of Thrones, to name a few. So with all this material, why does WarRock ask for donations? He explains:

"Because you support independent art. Because I release over 100 free songs and mixtapes every year for completely free. Because I never ask for donations, hell I don’t even allow people to donate throughout the year except during this Drive. Because the donor package is awesome. Because you’re awesome."

Seems fair. Hell, I donated $4, and I’m not even WarRock’s biggest fan; the title tag on his site reads “overly enthusiastic hip-hop” and while that’s an excellent description of his style, I’ve sometimes been turned away by that enthusiasm. It’s sometimes too much to take, like on tracks filled with desperate indie-kid earnestness like “Satellite” that just make me vaguely uncomfortable.

Fortunately, even the songs that have that over-eager quality or lyrics that seem forced (e.g. “Imperius Rex,” a song about Namor the Sub-Mariner that’s simultaneously badass and dull) come from a truly unique perspective. Speech Recognition will be the only album this year to feature a balls-out rap anthem about KFC, a sympathetic look back at the mediocre life of George Jetson, and an inspirational “you can do it” track inspired by Pixar’s Ratatouille. WarRock never hides behind a persona—no secret identity for this hero; whether he’s rapping in the guise of Tony Stark or Hodor, there’s always an autobiographical nature to his verse, one that is confessional and positive, encouraging his audience and Internet haters alike to live their lives as best they can and be happy in the process.

And even if you don’t like WarRock’s music, the comics alone are worth the pocket change. There’s exclusive and rare material from Oni Press, Fantagraphics, Nedroid, Caldwell Tanner, Brian Clevinger, and more. For me, $4 was worth it simply to get my hands on every volume of KC Green’s bizarrely hilarious webcomic Gunshow, and if that’s not up your alley, there’s a comic about Viking Frankenstein fighting zombies that might appeal to you.

There’s no good reason not to donate to one of the freshest rappers in the industry right now. WarRock has spent three years honing his act, and he’s never been better—tracks like “Blog Rap” and “Keep Talking” prove that he’s not just a flash-in-the-pan geek MC, but a talented rapper with a flair for poetry where others see only cartoons. You can keep your Kanye and Jay-Z—Speech Recognition is what I’ll be playing all summer. Now if only he’d do a mixtape about Avatar: The Last Airbender…