Of all the 1960s tracks against violent machismo, The MC5’s “One of the Guys" was one of the most rousing. 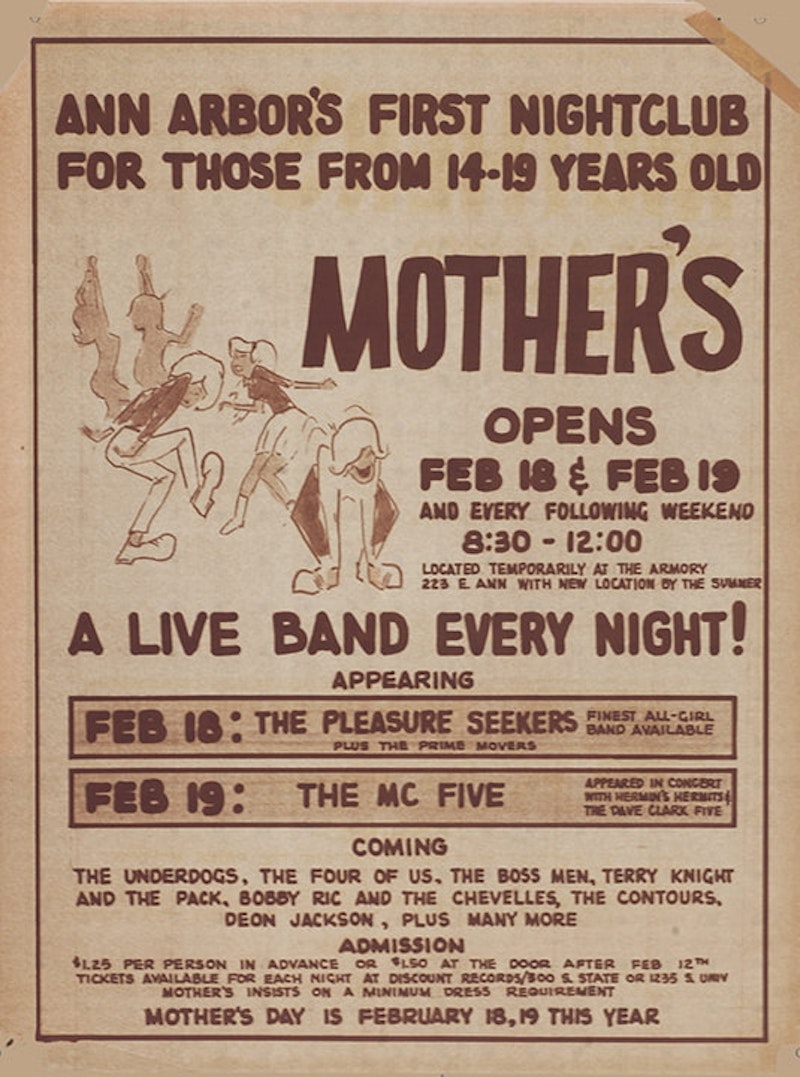 America’s first DIY music scene sustained heavy casualties when young garage rockers and their fans were drafted by the military. Millions of these kids were sent to Southeast Asia to serve in the Vietnam War. Politically conscious artists who survived Vietnam or skipped it altogether often created work that was an affront to death and violence. Invocations of life and love kept focus on the fact that Vietnam policies were created by macho villains who valued economic power, competition, and cultural polarities over human life. Of all the 1960s tracks that protested against violent machismo, one of the most rousing was The MC5’s 1966 debut recording “One Of The Guys.”

The raw blast of volume heard on The 5’s 1968 LP Kick Out The Jams wasn’t born of the “dope, guns, and fucking in the streets” mentioned in that legendary album’s John Sinclair-penned liner notes. The band’s steady diet of early-Who, electric blues, r ‘n’ b, free jazz, and melodic/songwriting influences from The Beatles and Motown made them one of rock’s most innovative and angry proponents. It gave them a distinct identity and top drawing status within the Midwest's thriving early 60's teen club scene.

Beyond music, their Lincoln Park base was the main influence. This southwest Detroit suburb was as buttoned down and “white bread” as you could get. Its population had auto workers, their families and friends, churches, schools, and strip malls. Everything was neat and orderly in its proper place. Most kids hanging out in Lincoln Park circa ‘66 never took a stand against Nixon, systemic racism, or Vietnam. Many had already returned home from the war physically and mentally damaged beyond repair by the time local indie AMG Records pressed up a couple of hundred copies of The MC5’s first seven inch “One Of The Guys” (which was the B-side for a cover of garage punk standard “I Can Only Give You Everything”).

“One Of The Guys” blares along like a psychotic mutation of The Coasters’ “Down Home Girl” and The Beatles’ “Taxman.”. Fine group vocal harmonies glide over the madness but there’s no crooning here; through walls of shattered guitar noise melodic snarl prevails. The lyrics form a declaration of peaceful resistance eviscerating the hypocrisy and jock mentality of a suburban meathead: “You tell me ‘bout your good times/Fist fights and stuff like that/Screamin tires, throwin beer cans… You goin down to the drive-in, boy, just to start trouble there/You’re diggin Stones and The Beatles too but you put down long hair... Don’t try to erase our differences by usin your fists on me!”

As powerful as they were, the lyrics of “One Of The Guys” didn’t break new ground. There had already been other 60s punk combos that decried the ignorance of LBJ’s America, including MC5 rivals The Illusions. Hailing from St. Clair Shores (another Motor City suburb), The Illusions’ 1965 barn burner “City Of People” is a stellar example of political punk. What was innovative about The MC5’s debut was the record’s deployment of white noise and low fidelity. This stilted clarity is a sloppy, technically uncontrollable sound made through a balance of recording know-how and musicianship. The overdriven mixing board becomes a member of the group. Its presence is just as important as the band’s cranked/stacked amps in a sound so dense that the atonal elements approach an orchestral breadth. “One Of The Guys” came from the new dimension where low fidelity was reborn as an ultrasonic protest against authoritarianism.