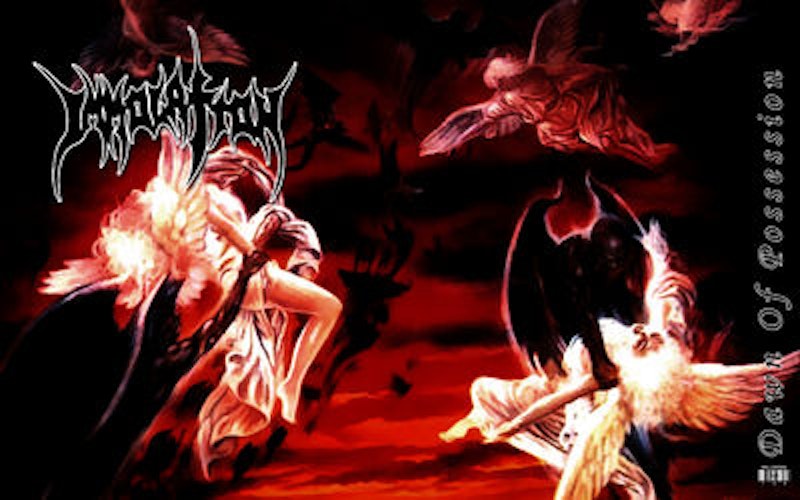 On the landscape of pop culture, death metal is an incongruous oozing spiky heap of torment. Too loud and abrasive to be popular; too formulaic and un-ironic to be avant-garde, it's the exploitation cinema of music—except that folks like Ridley Scott and Paul Verhoeven long ago took exploitation cinema mainstream. Death metal, on the other hand, remains more or less what it always was; a hermetic low-brow underworld of regimented troll fury.

Even seminal death metal bands, then, are largely unknown to everyone but hardcore fans, and that's certainly the case with Immolation. Hailing from Yonkers, Immolation was far removed from the central Florida death metal scene that nurtured acts like Deicide, Obituary and Malevolent Creation. Perhaps in part as a result, they're somewhat unheralded even by hardened metalheads. They show up on “best of” lists now and then, and they're certainly respected… but they don't provoke the rabid partisanship of, say, Cannibal Corpse.

Which is a shame, because Immolation's debut album, 1991's Dawn of Possession is solidly, idiosyncratically ferocious, from its demons-raping-angels tacky airbrushed cover through its obsessively anti-Christian lyrics. While many death metal bands of its era, like Deicide, embraced propulsive speed and whiplash, Immolation took a slightly different approach. The percussion still sounds like someone is pouring amphetamines into the drummer with a funnel, and the arrangements are jittery and proggy and clearly thrash-ready. But the whole thing keeps downshifting, the guitars thick and minor key and clotted, like massive primeval roadrunners stumbling into viscous tar pits.

There are other doom-death bands, of course—the amazing Autopsy, most notably. But Immolation feels less like they've fused doom and death, and more like they're trying for death but doom has come upon them. Parts of Dawn of Possession suggest a kind of bifurcated torment, in both lyrics and music. The five-minute long "Those Left Behind," opens with a slow, screeching, painful dragging guitar figure, like a tomb rasping open. The band then kicks into a parody of high gear, a swollen swagger that suggests classic rock performed by corpses. And all the while they rasp out the praises of Jesus:

I lift my soul joyfully

If not, my life will end painfully

Extol He who rides above the clouds

The song goes on like that, jerkily taking painful fight and then sinking under the gravity of coveted failure.

But have You won over sin and death

Victory’s crown shall be ours

For we are those

Those You’ve left behind

The singer lets out a distant shriek at the end, and the music cuts out to just the drum thunking emptily, until the next song, "Internal Decadence" comes in seamlessly with its despondent chorus "Twisted brain/Abstract world of pain/Anguish of the mind/Tortured afterlife."

Obviously, Dawn of Possession is an atheist document, but the tormented weight with which the music is pulled agonizingly first towards heaven, then towards hell seems close to the experience of some of the great Christian doubters. Take Gerard Manley Hopkins’ terrible sonnets, for example: "Bones built in me, flesh filled, blood brimmed the curse"—that's totally a metal lyric.

In fact, listening to Immolation's album full of prayers and sighs, wishes for hell and fears of heaven delivered against a backdrop of music constantly lumbering from defiance to crawling despair—listening to that, you start to wonder if it's really the volume and the harshness which has sidelined death, or whether it might be something else. Neither pop nor the avant-garde has much room these days for spiritual torment, at least expressed in such an explicitly theological context. Maybe Dawn of Possession is forgotten not like a pop culture curiosity, but like a dark night of the soul.