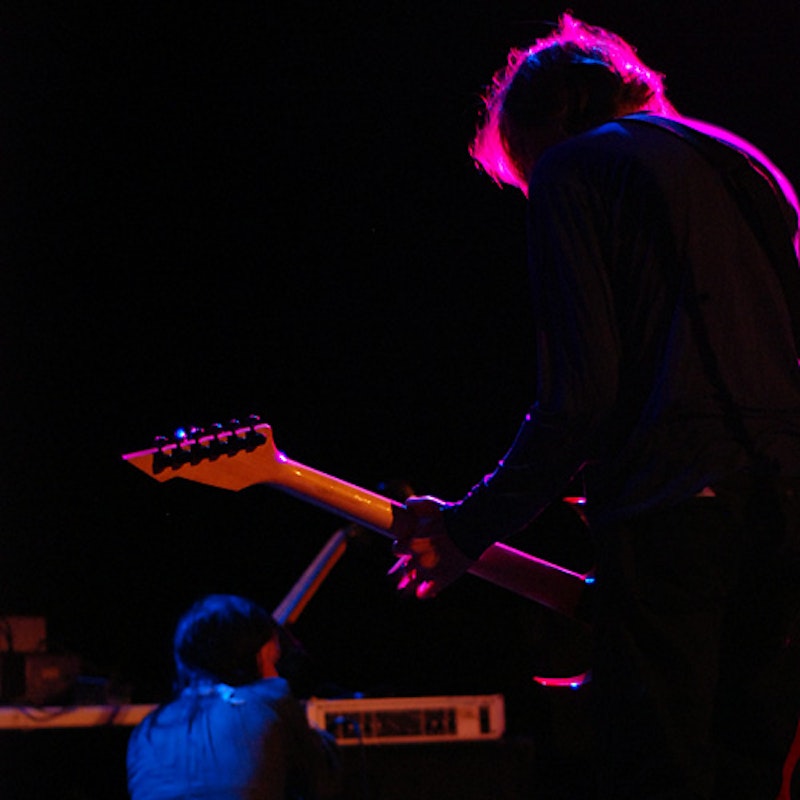 Unless one spends a great deal of time with Black Dice’s back catalogue, it’s a rare thing to bear witness to identity crises unfolding on wax. So dig in, and hang on, as this Scottish duo try and fail to hook a direction and reel it in, with delirious results. “Spastica” leads with distressed excretion synthesizers circling Jupiter while rocking coliseums full of toga-clad Andrew W.K. fans, which are overtaken by liquid-y effects-driven percussion that quickly goes from hippie to sharing a mind-meld with Carlos Giffoni’s Welcome Home then boomerangs right back to beardo again. In practice, what Blue Sabbath Black Fiji are doing sounds more open-ended and looser-limbed than the above description is able to convey. It’s one of those situations where the players aren’t so much willing a state of joyous confusion into being as they’re just tapping into cosmic frequencies and cutting us in, mid-score. See? It’s all about who you know.

If you’re a comic-book reader, comic book battles are awesome: all those super-powered punks battling all those other super-powered punks, felling monuments and skyscrapers and bisecting statues and disrupting traffic patterns in the name of score-settling and/or favorable sales figures. Noise pile-drivers like “Tantrik Ass Rape”—oh, sorry, “Legitimate Tantrik Ass Rape”—force me to peel back the fourth wall and pretend, just for a moment, that I actually have to live in the city where the Justice League International are battling Despero or where Hulk and Wolverine are throwing down for the umpteenth time. Lives are ended and thrown into disarray for no reason. Stuff blows up for without a larger purpose, and I’m suddenly and irrevocably overcome by the sheer senselessness of violence—in musical or comic-book form—in a world so in need of harmony and peace. At times, Skullflower and Skullflower principal Matthew Bowers’ other projects have scratched a special itch for me over the years, but “Rape” and the like are where a line has to be drawn between exhilarating artlessness and hard-core fracking for its own sake. Strange Keys To Untune Gods’ Firmament, this ain’t.

Ken Timber, “Untitled Track #4 from That Was Nice, Now Go Clean The Toilet”

God, this is just too perfect—the name of the dude responsible for the noise at hand—because I cannot listen to this song without thinking of those cartoons where some animal is up a tree, and becomes aware of a sawing sound, and then looks over, and there’s another animal with a huge, shit-eating grin at the end of the branch, just methodically sawing that branch off, and the first animal, the one in danger, always realizes a moment too late just how doomed he is.