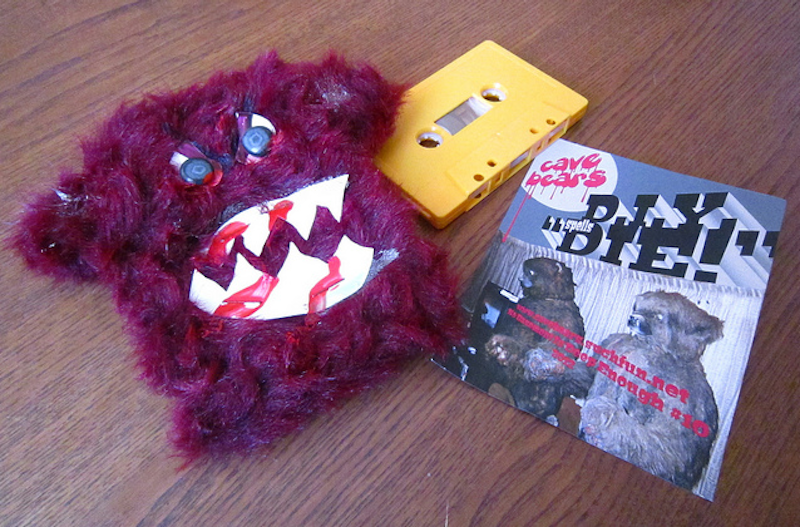 Here’s the thing about Cave Bears: you’re in, or you’re out. There is no such thing as a gray area with these guys; either there’s some redeeming anti-social value in the psyche-ward mischief, deconstructed-continuity delirium, and all-out misanthropy that Nick Williams and Caroline Bren perpetuate in your mind, or you despise this Baltimore/Massachusetts art-noise duo outright and wouldn’t piss on them if they writhing around in a puddle of napalm.

The approach they employ might be thought of as “collage punk”: a radical re-sequencing of referents and activities and nostalgia to affect a disorienting surrealism. This could mean emasculating “Bittersweet Symphony” for a half hour; this can equate to vivid, Tourettes’-inspired free association in a concert setting; this can be achieved wrestling noise from standard instruments, recording it, then slowing the recording down to something wholly unrecognizable in comparison to what you started out with. Music, in other words, can be whatever you want it to be.

D.I.Y. Spells “DIE” (No Basement Is Deep Enough) is unlikely to improve or degrade anyone’s opinion of Cave Bears. All chilling screams, choking gasps, tape-hiss scrawl, and pop-world wink, it’s another crude jump-cut labyrinth tour as imagined by glue-huffing teenagers making merry with a tape-deck, a milk crate of cheap C60s, and an endless summer vacation. When Williams spits “You fucking asshole! Nobody cares about your shitty art,” he’s self-immolating and projecting what he expects from the audience back at us. Cave Bears love is tough love.

The main difference, on this cassette, is that a) Williams and Bren come across as smarter, more judicious editors of their archived inanity, successfully resisting the temptation to cram too many ideas in, and b) there’s a narrative of sorts. Side A’s full complement of abject retching and note-subjugation follows an unhinged, Bobcat Goldthwait-esque monologue about the nature of country & western pop stardom; as such, it’s possible (and fun) to interpret this part of the album as someone taking the introduction as gospel and losing the plot while trying, really trying, to tap into his inner country & western star. It’s a mess, of course; it’s not unusual to stumble into a mosaic cul-de-sac where hospital equipment is squealing, apologies are being babbled out (“I’m sorry I made art whose only purpose is to negate other art”), somebody’s gibbering from behind a ball gag, and the buttons of a tape machine being pressed and depressed randomly on a separate track. But there’s some semblance of a governing logic at work here that puts this in a different league from Jump To Your Bed or Chain of Skulls or Assburgers.

There’s a warped comedy underlying Cave Bears’ aesthetic that comes through nicely on Side B. “I’m gonna drink some blood,” Williams intones early on amid a windy, winding sweep of low-res noise shifts; this is the calm before the storm. Eventually “I’m gonna drink some blood” begets “I’m totally gonna drink some blood”—each utterance jerked to imply the satanic, and then somebody gibbers like the Hamburglar. I can’t really overstate how quiet and just fraught Side B is, at this point, how implosive, with whimperings on the edge of the mix, and some odd low effects serving as the only sounds at moments where there’s nothing happening at all or snippets from Sinatra-era standards swipe at the ambiance. The tensions build until it becomes clear that we’re bearing witness to Cave Bears’ notion of a comic-book origin story—“I AM BLOOD MAN! NYAH NYAH NYAH, NYAH NYAH NYAH!”—and post-reveal you’d expect them to amplify, to give in to deafening volume and pretty much defoliate the valley. The joke, maybe, is that they refuse to go there: a minute of hushed loops of porn-kitten moans, subdued White Zombie (I’m betting) grind, free piano eruptions, riding out on a wave of Dictaphone idiocy, lots of white space swamping it all.