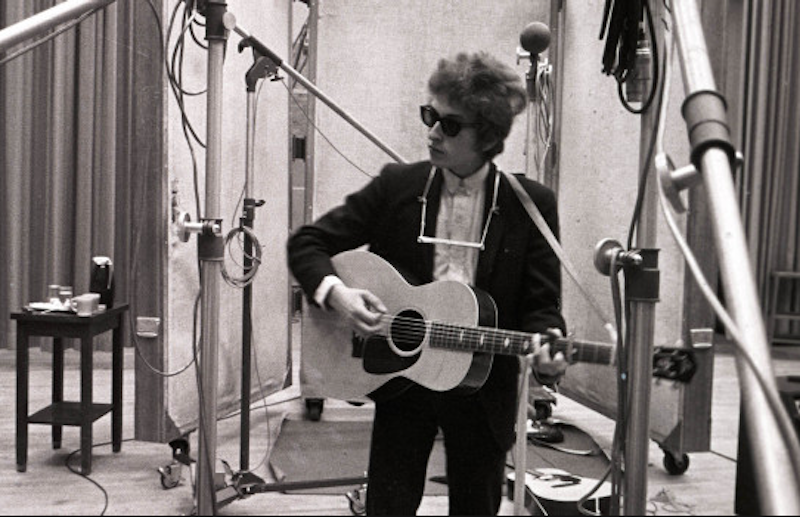 “We got a good sound in here. ‘Dimestore,’ take one.” So begins The Cutting Edge, the 12th volume in Bob Dylan’s Bootleg Series, covering my favorite period of his career: 1965-66, when he produced “the masterworks”: Bringing It All Back Home, Highway 61 Revisited, and Blonde on Blonde. The first of six-disc version begins with the very first takes of “Love Minus Zero/No Limit,” then given the working title of “Dimestore.” Dylan plays acoustic guitar alone and sings hesitantly, dropping lines and halting as if he’s writing the song on the spot. The sound of Dylan going into the studio with compositions so shaky and unfinished to be recorded for posterity, and coming out with classic songs over half a dozen selected takes is pretty mesmerizing. He ends the first scratch take of “Love Minus Zero” shouting at the engineer, “I’ll do this one more time, if I can’t do it, we’ll do another song.” “Ohhh-kay….” “I can do any song as good as I can do it the first time!”

Take two is sturdier, with sentences still being dragged out and verses dropped in favor of harmonica fills. Bass and light percussion emerge as Dylan’s playing and singing become steadier. He approaches the phrasing and timbre at which we know he’ll arrive on the album version slowly but surely, and like I always suspected, his dropping of the word “cold” in the last verse is an anomaly on Bringing It All Back Home: in every other contemporary version, including the infamous scene in Dont Look Back where he humiliates Donovan in a hotel room purely out of spite by playing the song. The two “complete” takes on here, i.e. full band, approach the version we know closer and closer, with the session players’ licks either cementing themselves over the two takes or revealing themselves as total flukes.

Although “Love Minus Zero/No Limit” is my favorite Bob Dylan song, I don’t have the ear that my dad does for the differences in intention, inflection, delivery, and cadence on the rest of this set. I look forward to digging through the songs I barely know—like the very next song on the first disc, “I’ll Keep it With Mine.” I know that title, but I don’t recognize the tune from this gorgeous piano, voice, and harmonica version. The piano’s timbre is gorgeous, sort of honky-tonky, with Dylan’s voice soaring, a hint of the hurt howling Blood on the Tracks sound. I admit this isn’t something I would’ve paid for, unlike the Kurt Cobain Montage of Heck: Home Recordings coming out on Friday. I would’ve already ordered it if Amazon even had a listing for the 31-track deluxe edition (with a nine-minute “Do Re Mi” medley!!!). I love these session and odds and ends box sets, even if I haven’t already exhausted the masterwork, because the definitive takes are often revealed as arbitrary and no more revelatory or pristine than the ones surrounding it.